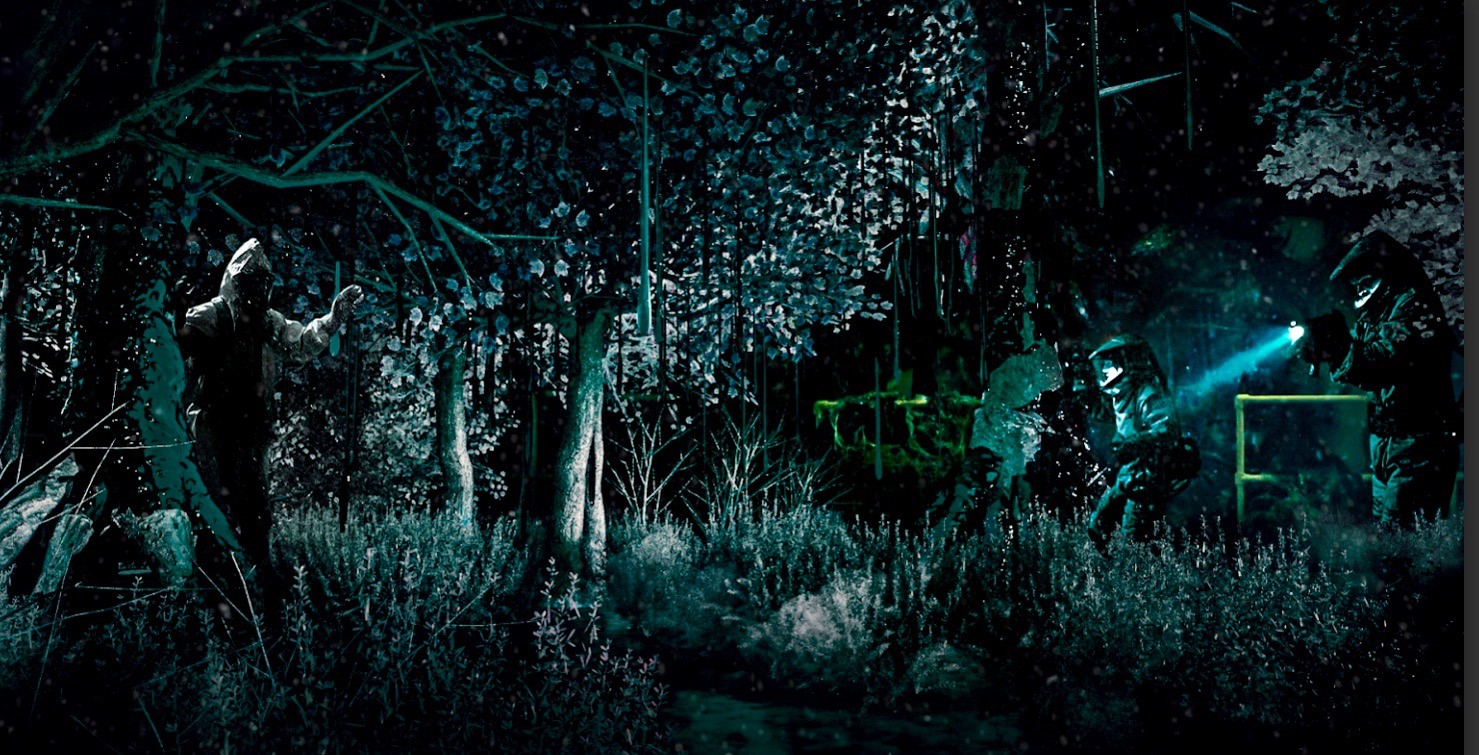 On September 30th, Toronto will be transformed into one of the largest and most unique all-night art festivals in the world, with contemporary art installations scattered throughout the city.

Nuit Blanche will hold a very special meaning this year, as it will be honouring the milestone of Canada’s 150th anniversary with the event-wide theme Many Possible Futures. This theme will dive into timely and relevant issues facing Canadians including protest, social change, revolution, environmental degradation, Indigenous rights and gender equality.

From sundown to sunrise (7 pm to 7 am) this Saturday, Toronto will be yours to discover. And with over 85 contemporary art projects by more than 350 local, national and international artists there’ll definitely be something to pique everyone’s interests.

Not sure what to check out first? We’ve rounded up 12 installations generating serious buzz. 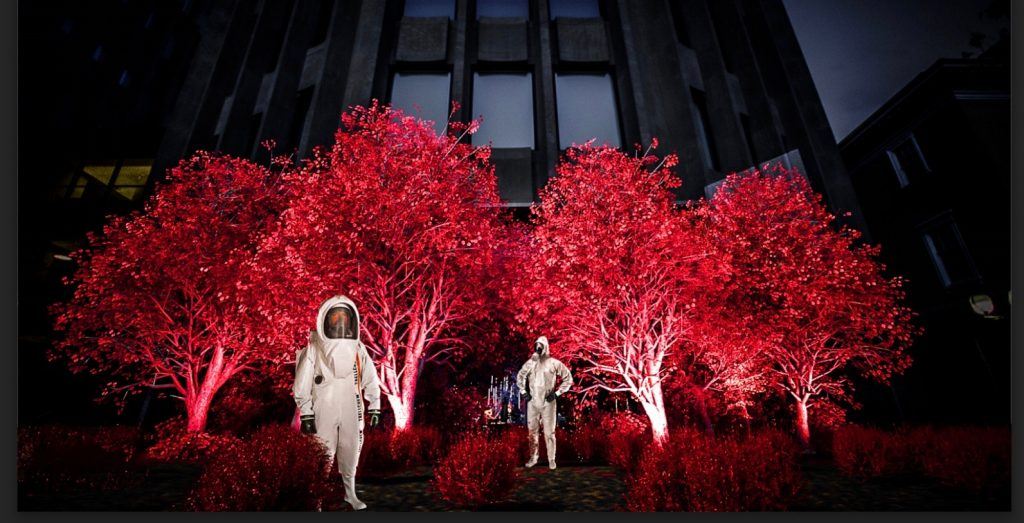 What: Calling all Stranger Things fans! Netflix will be participating in Nuit Blanche this weekend by inviting event goers to discover a world within a world inside The Red Forest. Wearing a provided hazmat suit, visitors enter The Red Forest to a gooey, creepy avant-garde real-life version of the notorious Upside Down from Stranger Things.

Where: Walking path between University Avenue and Osgoode Lane

What: This temporary community silkscreen studio is apart of the Monument to the Century of Revolutions exhibit and will encourage the public to produce banners, t-shirts and posters that address a variety of pressing issues facing Toronto’s communities. After getting something live printed, visitors may add their prints to an ongoing wheatpaste mural on the exterior of the container that will change and evolve throughout the evening as new prints are added.

What: As part of the Monument to the Century of Revolutions exhibit, this installation is designed to represent a maximum security prison cell, Monument to(Im)mobilization mirrors the space from which undocumented migrants and refugees organized a historic hunger strike in 2013 to call for an end to immigration detention.

The Rematriation of Revolution

What: If you prefer taking in an installation that includes live music, The Rematriation of Revolution featuring Red Slam is a performance you won’t want to miss. This installation is apart of the Monument to the Century of Revolutions exhibit and is comprised of three powerhouse live musical sets which weave audience engagement with a fusion of music, words, movement and projections.

Lukumi Dub Opera 150 Years Before & After

What: Apart of the Monument to the Century of Revolutions exhibit, this installation is set over a 12-hour period. Lukumi Dub Opera explores the legacy of Canada particularly in relation to the treatment of the land and potential environmental fallout from a nuclear disaster, 150 years leading up to the present and 150 years into the future through music, poetry, visual art, mythology, and play.

What: Created by Cedric Bomford and Verena Kazimierz, Embassy is part of the exhibition Calculating Upon the Unforeseen and will be solely constructed from familiar materials like metal scaffolding wrapped in printed vinyl. This exhibit is designed to suggest a “space half-realized”, as if on its way to becoming something larger, something more permanent. Forever in progress, Embassy requires visitors to complete the structure in their minds.

Where: Located along Dundas Street West from the AGO to Yonge-Dundas Square

What: As part of the Taking to the Streets exhibition, Holding Still//Holding Together is a powerful performance that looks at the struggles between police officers and protestors, whose limp bodies are dragged, moved or carried off by force from the chaos of street protests.

What: This is an installation from the Taking to the Streets exhibit that will have you listening to more than observing. Located under a bridge on Wellesley Street, in front of the parliament building, you’ll find a series of cars pump out bass-heavy music on powerful interconnected sound systems. Orchestrated by Joe Namy, the acoustics are an homage to the street as a place of coming together.

What: If you’re worn out from exploring Nuit Blanche, head to U of T’s Music Faculty’s building, where you’ll discover cots and pillows to rest on that have been individually prepared by newly arrived refugee women. As part of the Taking to the Streets exhibit, Dream Variations extends the gesture of hospitality and invitation into a sphere of trust, the quiet space suggests forms of exchange between host and guest, quietly countering oppressive hierarchies and perhaps generating empathy, recognition and new social bonds.

What: Live from Toronto’s historic Campbell House Museum, Cherish Violet Blood will be hosting an all-night immersive theatrical production for a distinctively Blackfoot spin on colonial history as part of the Life on Neebahgeezis exhibit. Based on late-night entertainment talk shows, Blood casts the spotlight on storytelling with under-the-radar stories about race, gender and class featuring invited friends, live music, and recorded video.

The Many Large Houses of the Ghosts

What: Created by Marianne Nicolson, this installation is part of the Life on Neebahgeezis exhibit and will feature animated hand-drawn pictographs projected against the exterior of Old City Hall. This installation is intended to reflect ghost stories from the dead of night, recalling the supernatural spirit world while addressing the institutional haunting of the building as a symbol of the nation-state and Toronto’s history.

What: As part of the EDIT festival (Expo for Design, Innovation, & Technology), Torontonians are invited to check out the immersive exhibit during Nuit Blanche in celebration of the design, innovation and technology projects that are shaping our future for the better, which includes crickets combatting global hunger, medical supplies being 3D-printed in outer space, drones delivering blood to remote communities, and shipping containers as the future of farming.