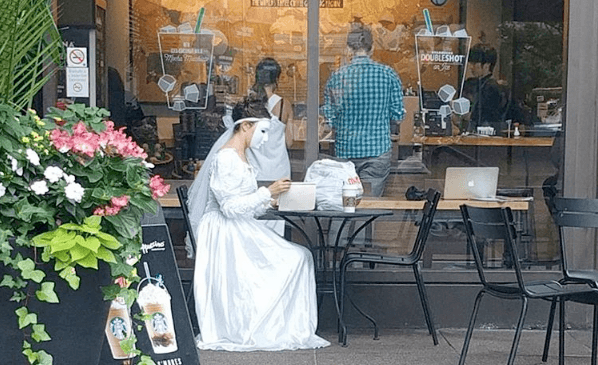 There is a masked bride currently embarking on a poetic tour of Toronto.

Wearing a white wedding gown and her signature mask, the bride has been wandering the city, handwriting what look to be letters or diary entries chronicling an abusive relationship.

On a thread that began July 10, users of Facebook Group “Weird Toronto” report having seen the mysterious bride at Christie Subway Station and walking down Queen Street. Other reported sightings put her at Yonge and Queens Quay, as well as Ossington Station. Pictorial evidence suggests she is a fan of Starbucks and the Metro supermarket chain.

The bride’s notes contain details of a broken relationship with an anonymous restauranteur, whom she claims has a problem with substance abuse. The notes contain such haunting sentiments as, “I would have loved you forever. Been your partner through life’s many ups and downs, but you would have destroyed me.”

Though the bride details a tumultuous romance with a man she describes as not wanting “any woman’s love,” her notes contain a tinge of optimism. She writes, “I want to find that love – but I will find it first within & I hope you do as well, because your light is bright within, mon amour.”

On July 13, Robert Wharry posted a video to YouTube showing the bride writing in her notebook. Wharry claims that after she finished composing her letter, the bride ripped the paper out of her book, leaving it behind as she departed on foot. Like the video’s title, the note is addressed “To Whom It May Concern.” However, the video has since been removed from YouTube (further intrigue!)

So far, the masked bride’s identity remains unknown, though she typically leaves notes behind wherever she goes. It is uncertain whether she might be multiple women wandering the city in the same costume, or a single person engaged in a city-wide tour.

It is also unknown whether Toronto’s masked bride is a heartbroken woman expressing the pain of a lost love on paper, or a performance artist staging a piece on the devastating nature of abusive relationships.

Have you spotted the masked bride? If so, share your story in our comments section.