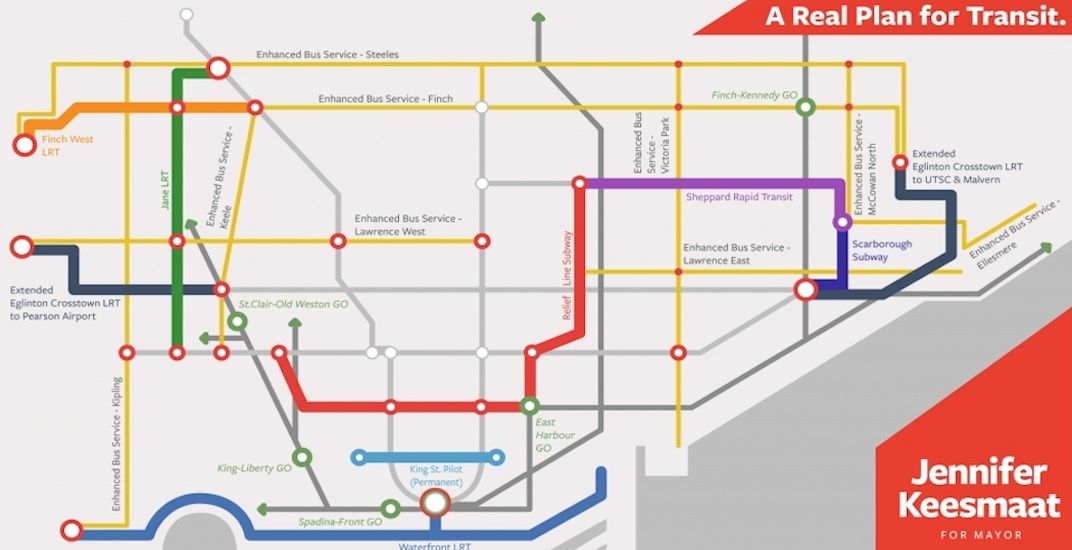 With the municipal election less than two months away, mayoral candidate Jennifer Keesmaat has announced a major transit plan that will include building the Relief Line three years earlier and making the King Street Pilot permanent.

Keesmaat introduced her Network Transit Plan today, August 30. It’s an ambitious strategy that highlights key priorities that fill out Toronto’s public transit system and hopes to deliver shorter commute times to every neighbourhood in the city.

There are seven key components to Keesmaat’s plan:

Keesmaat also used her announcement to criticize Mayor John Tory’s SmartTrack plan, calling it a “proposal that never left the station” and “an empty promise to buy votes in 2014.”

John Tory was elected Mayor of Toronto on a promise to build “SmartTrack.” We now know exactly what it was — a political promise drawn on the back of a napkin designed to buy your vote. What we need is a real plan to build a better transit system for everyone. #Keesmaat4Mayor pic.twitter.com/xAlsOMOF52

“Her plan is a risky proposition and that means nothing is getting built. We’re going back to the bad old days of endless debates, endless re-drafts and endless talks,” says the statement.

“Toronto needs a mayor who will end the talk and get on with building. Someone who will stick with [a] plan; a plan developed by City transit experts, approved by Council and funded by the other governments. This is what Mayor John Tory has done and what he will continue to do.”