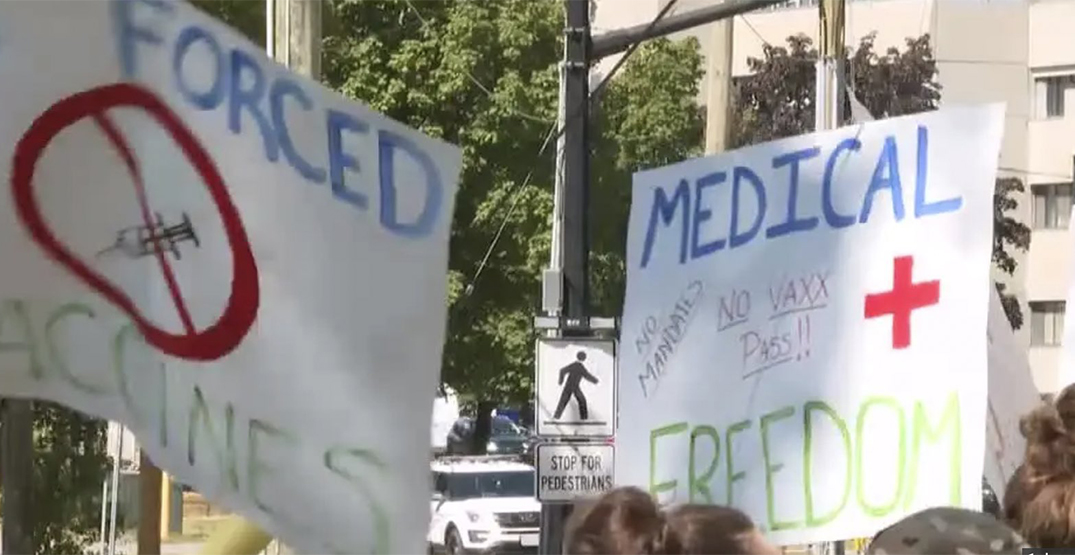 Toronto police officers are on-scene at an anti-vaccine passport protest on hospital row. The force says the crowd has not yet blocked access to any of the healthcare centres along University Avenue.

Demonstrators who oppose vaccine passports gathered on hospital row Monday afternoon as part of a series of hospital protests planned across the country.

Political leaders and health experts have denounced the protests, saying it’s unfair to add stress to patients trying to get to their appointments and healthcare workers who are already strained.

“Demonstrations outside of hospitals not only put healthcare workers and staff at risk, but also patients who come to the hospital for care,” University Health Network said in a tweet. The organization operates at Toronto General Hospital.

Teams at UHN have worked tirelessly throughout the pandemic, often putting their own wellbeing aside, to protect those most at risk in our community. They have fought to keep the community safe, and deserve that same right to safety when coming to work.

In front of a hospital in Vancouver, a large anti-vaccine passport protest received widespread criticism over images of the crowd blocking an ambulance from driving down the road.

But so far, the Toronto protest has been smaller, and demonstrators have not yet blocked critical hospital services.

Toronto police tweeted that there have been no reports so far of the crowd obstructing patients or hospital staff. Hospital services have continued as normal, police added.

DEMONSTRATION:(UPDATE)
Hospital Row
– there has been no disruption to hospital services
– no reports of hospital staff or patients being obstructed
– officers will remain on scene to ensure public safety
– will continue to monitor and provide updates when available#GO1753176
^al

At least one counter-protester showed up to hospital row, appearing to make fun of the protesters with a sign calling them selfish and ignorant.

Apparently this is the other side of the sign, I think he’s trolling the protesters… pic.twitter.com/jEOlzsjKeS

Canadian Frontline Nurses, the organization behind the anti-vaccine passport protests, staged “silent vigils” in 18 cities across the country Monday to oppose what they call “tyrannical” COVID-19 measures.