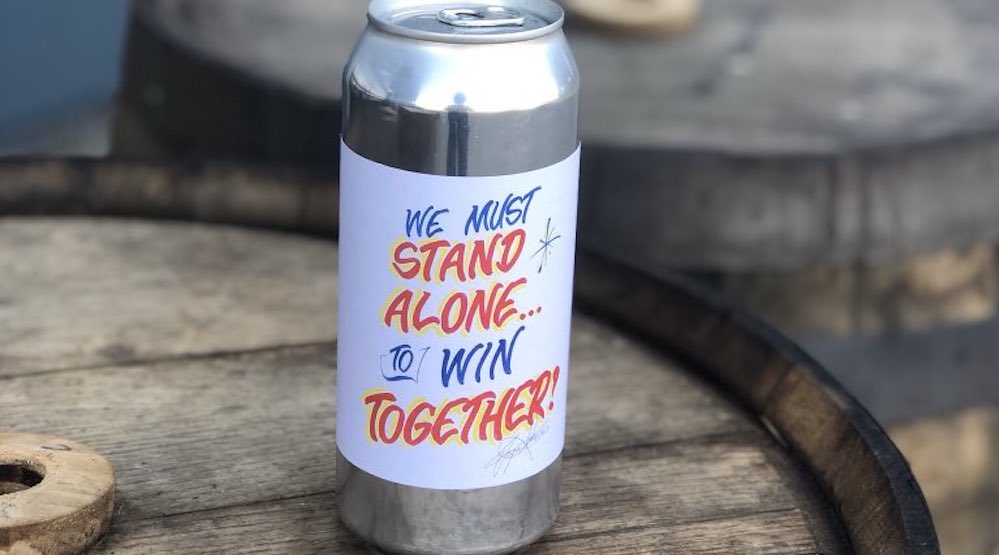 To be a true Torontonian is to have seen at least one of Wayne Reuben’s hand-painted signs around the city.

With over 45 years of experience, Reuben’s signs were a fixture in the historic Honest Ed’s store which shut its doors in December 2016. Although he’s now officially retired, Reuben continues to create custom signs that are featured all around the city.

His latest work, a charity fundraiser for a local food bank, happens to be a nod towards his classic Honest Ed signage.

As a way of raising money for the Parkdale Community Food Bank, Reuben has created a limited run of hand-painted signs that say “We Must Stand Alone To Win Together” in his well-known font.

“This heartfelt slogan came to Wayne one night while he was sleeping,” said a Facebook post by the Parkdale Community Food Bank.

“He strongly feels that despite needing to maintain physical distance from one another, we must come together like never before, put aside our differences and take action for the greater good.”

Each one of the signs is authenticated with Reuben’s signature, and are currently available for $250. Half of the proceeds will go directly to the food bank.

Those interested in purchasing a poster can send an email request to Reuben’s daughter, Niki, at [email protected]

The idea of creating posters was initially sparked by another Toronto-based artist, Dreeem, who’d taken inspiration from Reuben’s work to create a collaged “We’re All In This Together!” poster.

Dreeem’s poster was so well-received, that he’d started selling them online with proceeds going towards local coronavirus relief efforts.

But Reuben’s daughter asked Dreeem to stop selling them on the grounds of copyright infringement and has been working with her father to promote his posters instead.

Dreeem has removed his posters from his online shop because he can’t sell them in good conscience knowing Reuben’s objections, he said in a statement on his website. Dreem has suggested the two collaborate to raise even more coronavirus relief funds.

In addition to the posters, Wayne Reuben has teamed up with local brewery Henderson Brewing to sell limited-edition pint glasses and specially labeled beers.

In a social media post, Henderson Brewing revealed that the nostalgia mixed with the messaging on Reuben’s signs had caught their eye.

“We reached out to Wayne to ask if he would donate his work to our Ides of April 2020 label and, happily, he said yes. We, in turn, are donating all the profits from this release to the Parkdale Community Food Bank,” said the Instagram post.

The beer is currently sold out online but is available at the Henderson Brewing Co. bottle shop at 128A Sterling Road.

All proceeds from the $3.75 cans of beer will go directly to the food bank.