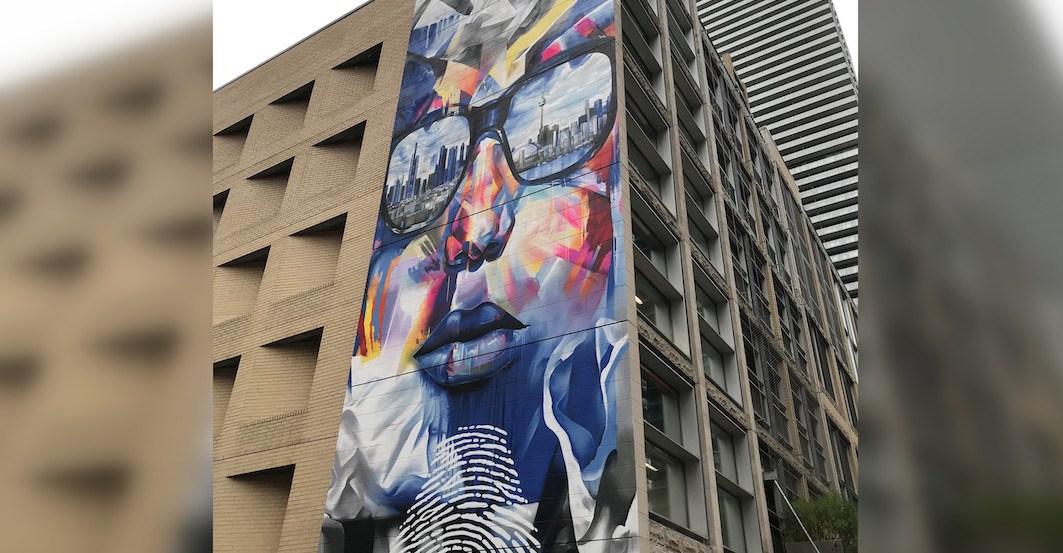 A colourful mural that depicts Toronto’s relationship with sister-city Frankfurt by German artist Justus Becker is now visible high in the sky in Scarborough.

Located near Yonge and Charles Streets, the large mural was created as part of the StreetARToronto (StART) 2019 Mural Exchange project and celebrates the long-time relationship that Toronto and the German city share.

The mural was conceptualized and painted over six days by Becker, who is from Frankfurt, with support from local artists Alexander Bacon, Quentin Rockford, Christina Mazzulla, and Kyla Buium.

Featuring the landscape of each city in the reflection of the glasses on the mural, the stunning piece illustrates the special friendship the two cities have shared for the past 30 years.

“Diversity is what Frankfurt and Toronto hold in common, and that very much influenced my concept,” said Becker.

“The vibrant and colourful pallet represents the diversity of people in Toronto and the fingerprint represents the idea that each one of us has an impact in our society.”

The 2019 Mural Exchange project by StART is a City of Toronto program that works to showcase the work of local artists on an international scale.

As part of this exchange, a Toronto street artist will travel to Frankfurt to collaborate with German artists and create a new mural celebrating the two cities’ longstanding relationship.

The wall where the mural is painted is part of a Green P parking garage located at 20 Charles Street East.