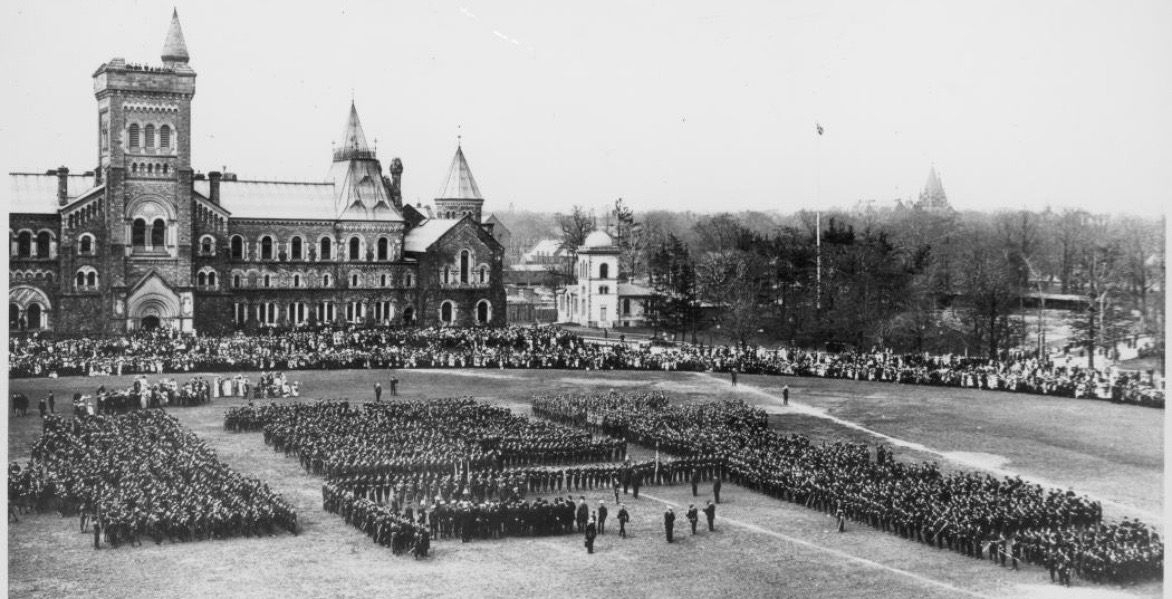 Troops lined up outside of University College/Courtesy Toronto Archives

This weekend Torontonians will remember and pay their respects to those who fought during the First World War, and every war afterwards, at Remembrance Day ceremonies being held across the city.

By the end of the war around 45,000 Torontonians served, while many at home also did their part during the Great War. The city saw a number of its parks, schools and factories handed over to the British government to help train military personnel, imprison enemies, produce weapons and more. Toronto was the main hub in English Canada where people were recruited, trained and deployed.

Almost every space in Toronto was transformed in some way to support the war effort and this is what it looked like.

In September 1914, the CNE grounds became Exhibition Camp, encompassing military training, a housing centre and jail. CNE buildings, such as the Horticulture Building (most recently Muzik) and Government Building (present day Liberty Grand Entertainment Complex), acted as residences for about 10,000 troops, while Stanley Barracks became a prison for new immigrants from enemy countries.

From 1915 to 1918 the CNE continued to hold its annual fair, using the event as an educational platform for attendees. Soldiers gave trench tours and drill demonstrations to highlight the war to visitors. 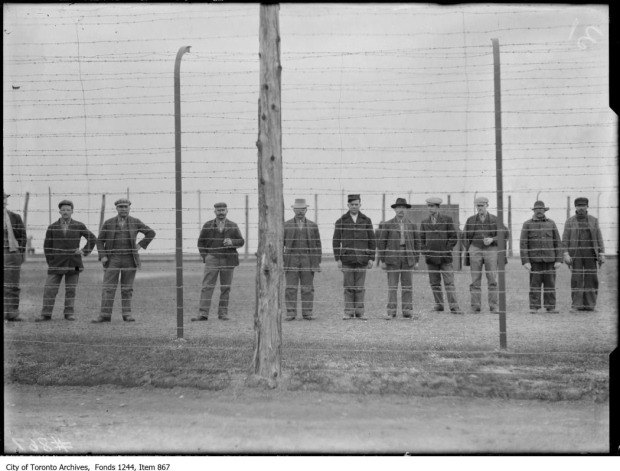 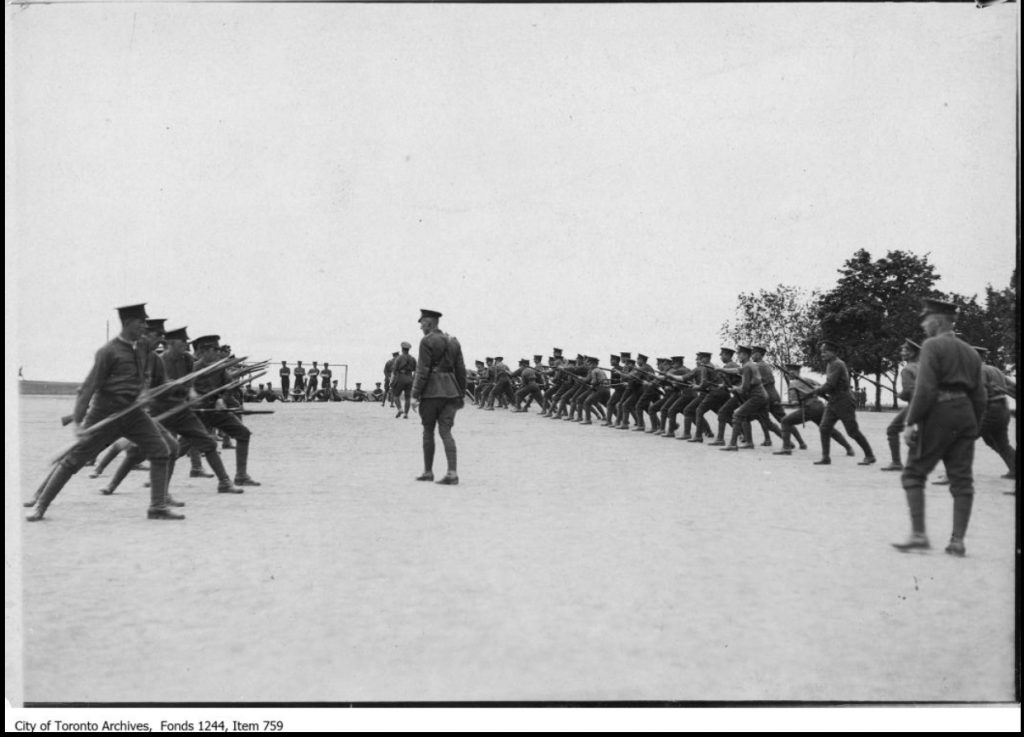 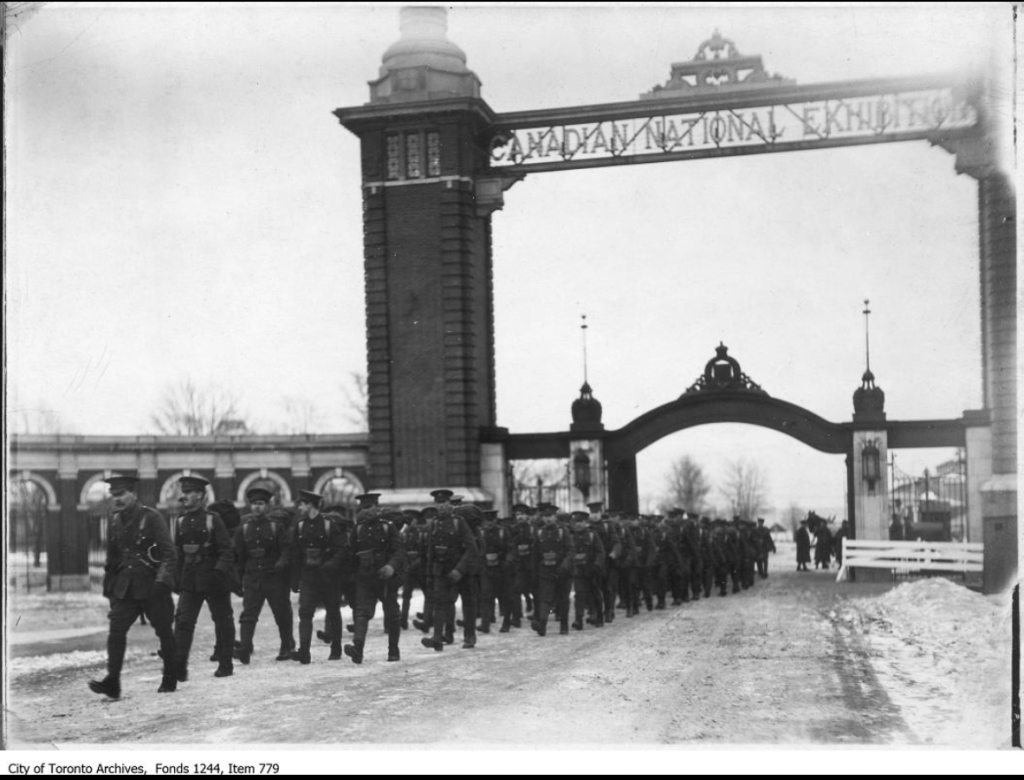 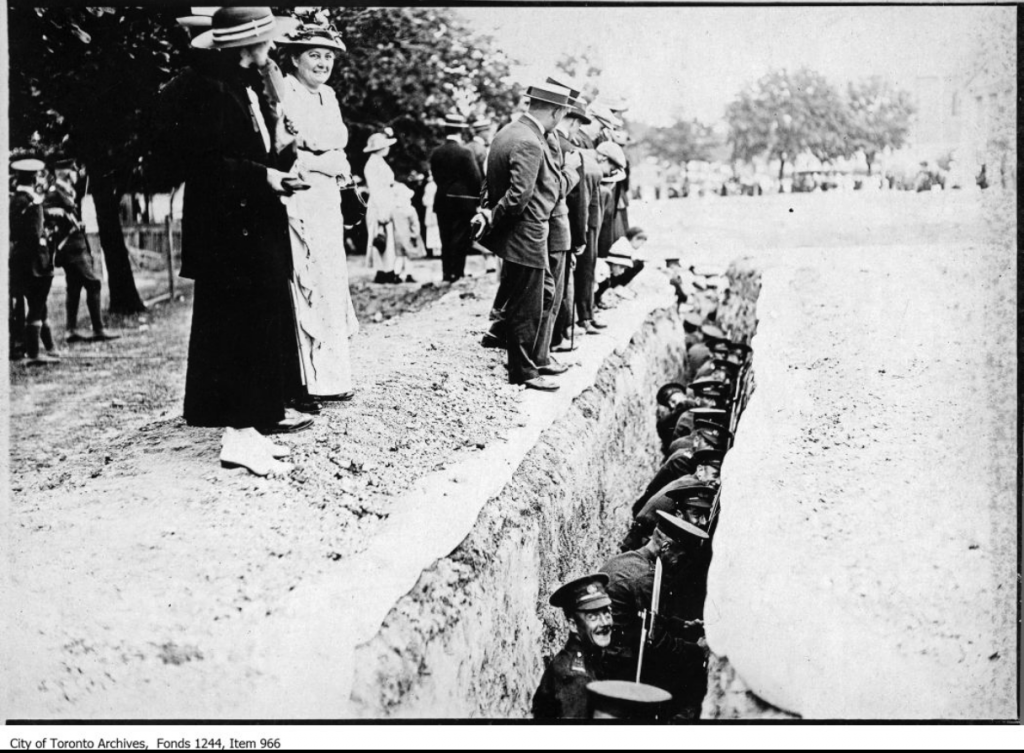 While Gooderham & Worts Limited was known for producing booze, it eventually became British Acetones Toronto Limited during the war, where it produced a key ingredient in smokeless gun powder. It is estimated about 1,000 tons of acetone was produced per year, making it the Empire’s largest provider. 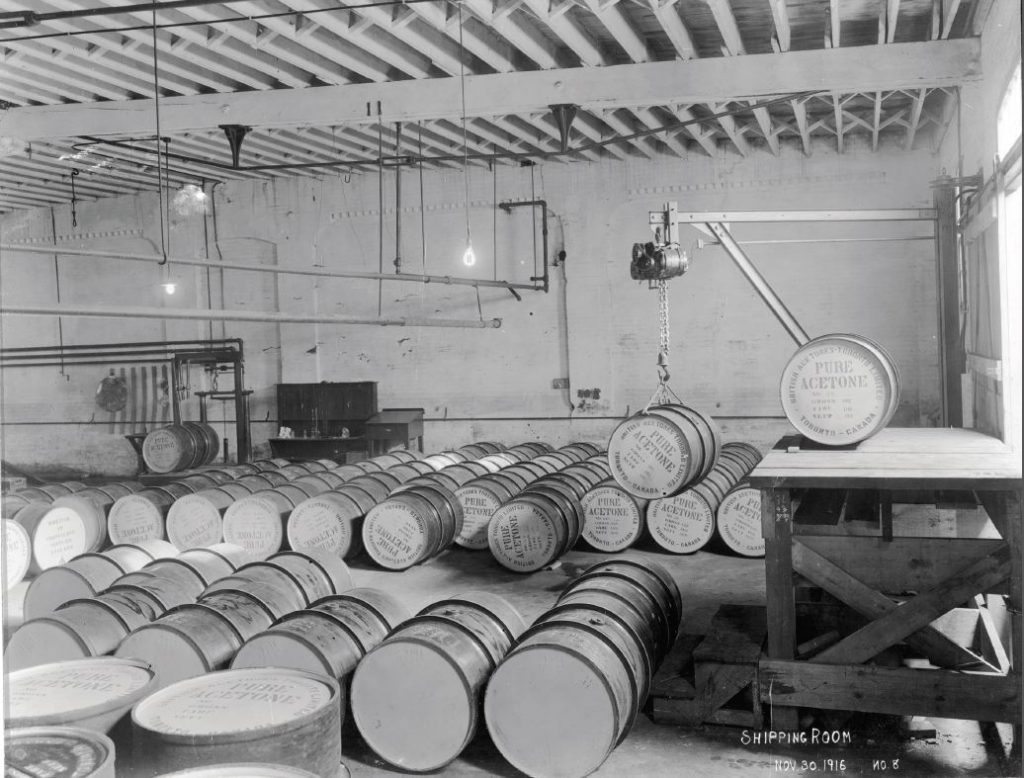 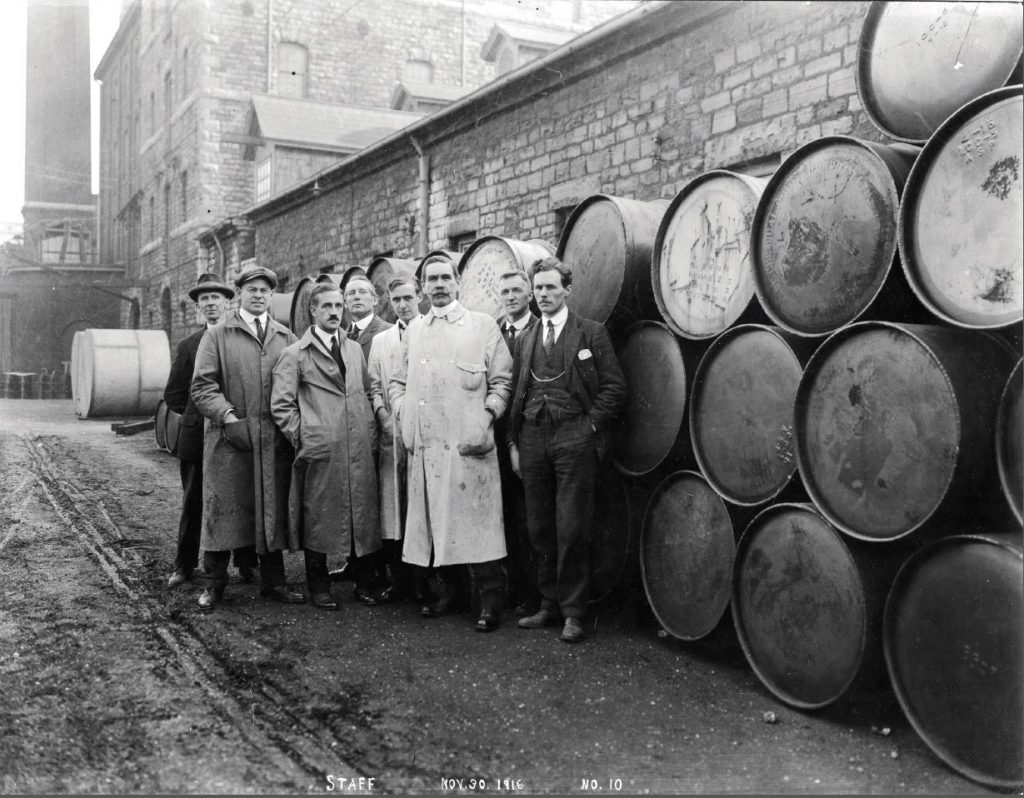 Sprawling with tall condominiums today, Liberty Village was home to many factories, which were transformed into munitions shops during the war to make bombs and weapons or, in the case of the Toronto Carpet Factory, army blankets and khaki cloth. At one point bombs were being stored on Liberty Street. 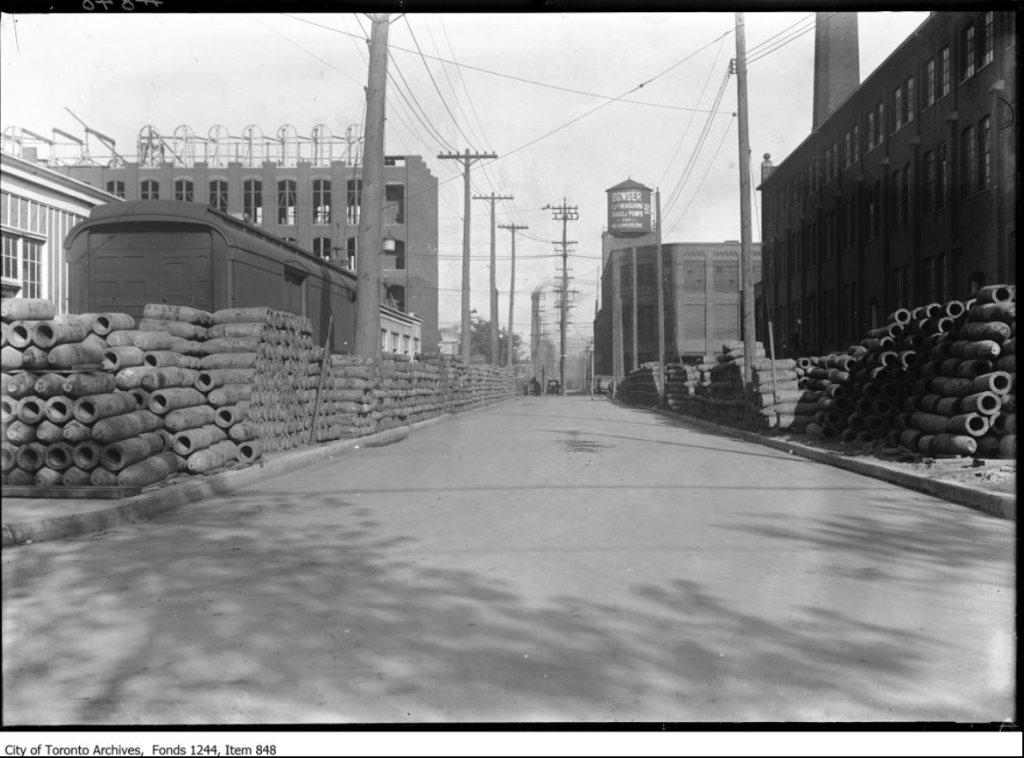 Known just as City Hall during the war, the building was a centre for activity. A number recruitment and Victory Bond rallies were held, parades with soldiers would occur and activations depicting war life were set up. 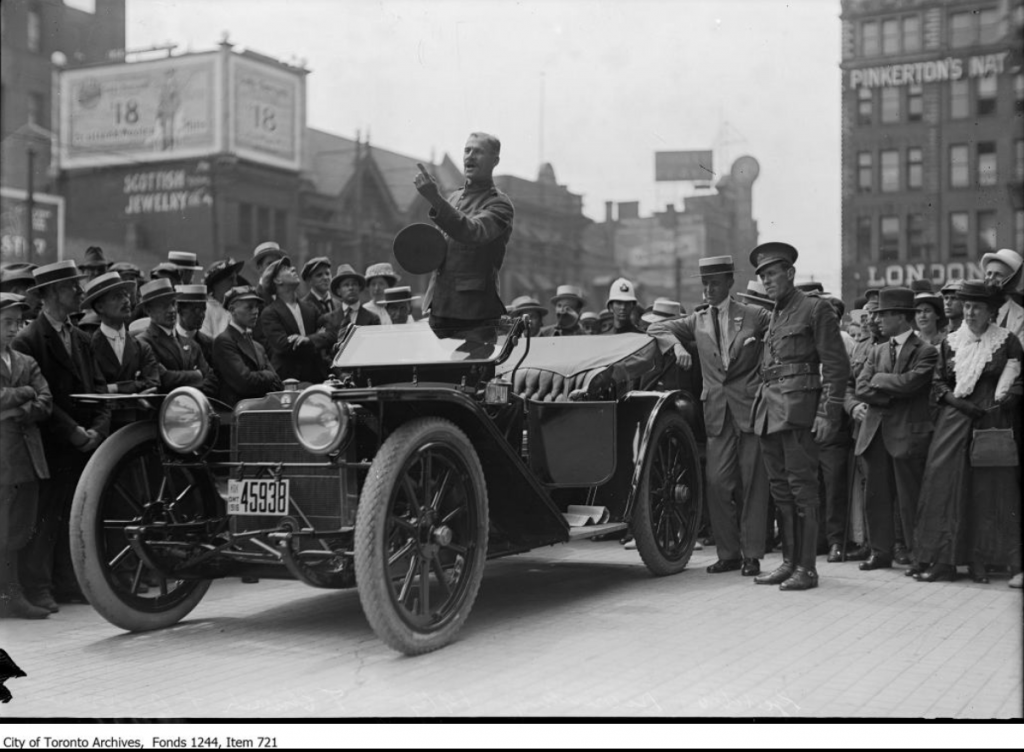 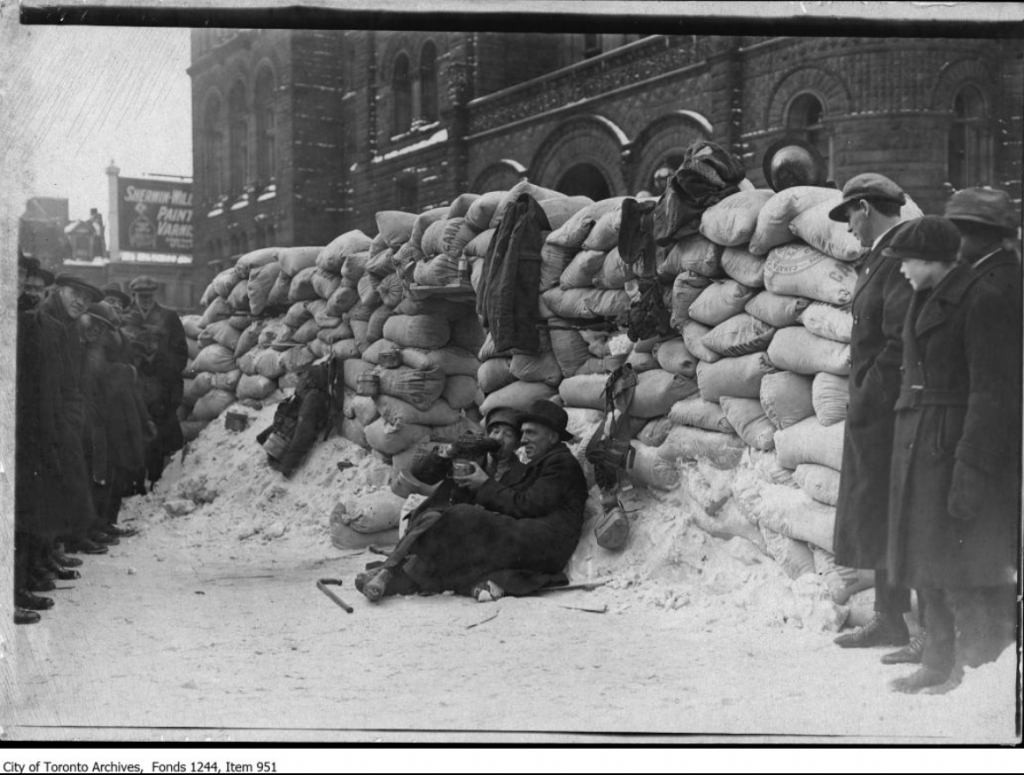 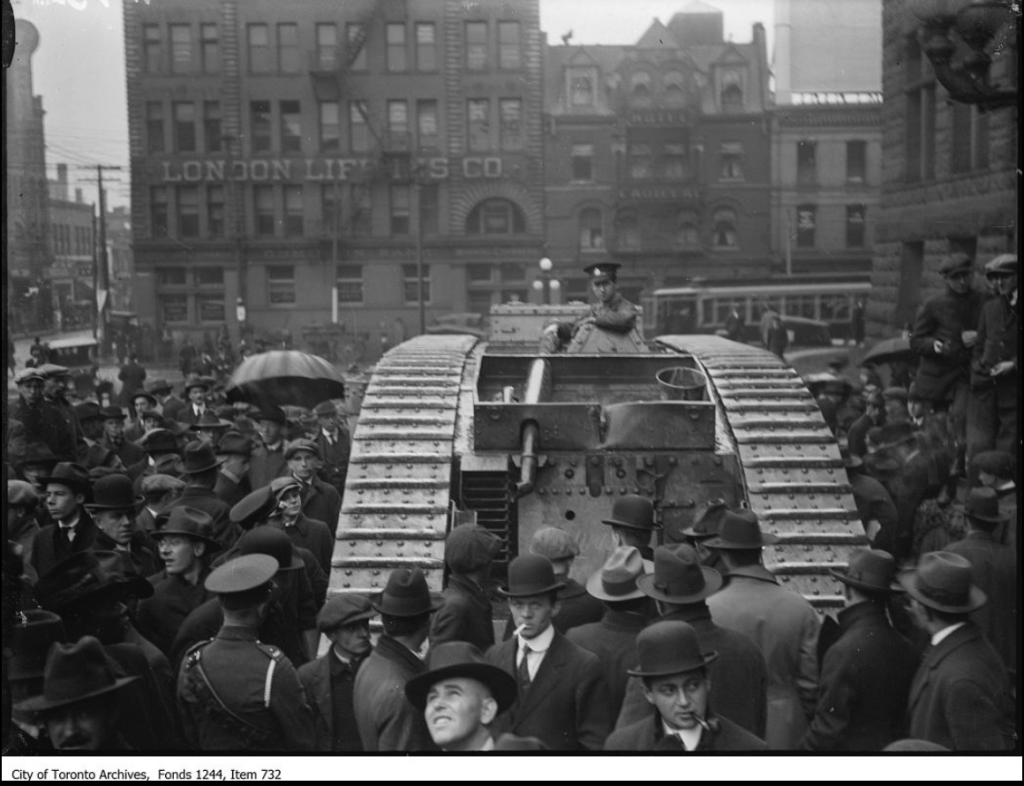 Toronto parks were converted into training grounds for soldiers during the war as the open spaces were favourable for gun practise, canon firing and horse training. Whether individuals were going off to war or practising to protect the homefront people would gather at High Park, Riverdale Park and Marie Curtis Park. 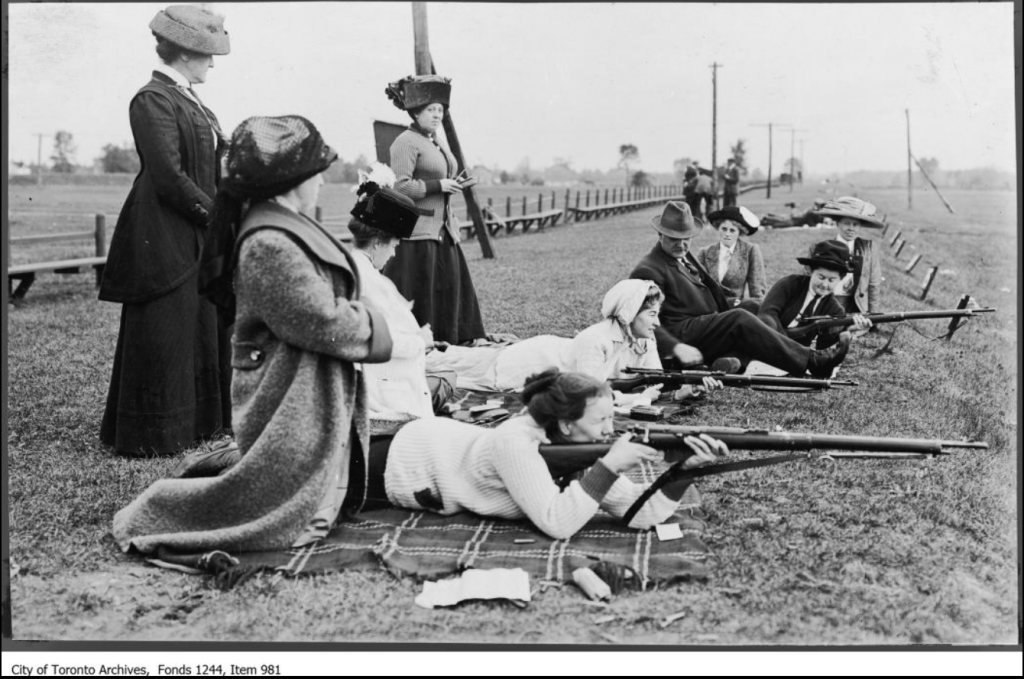 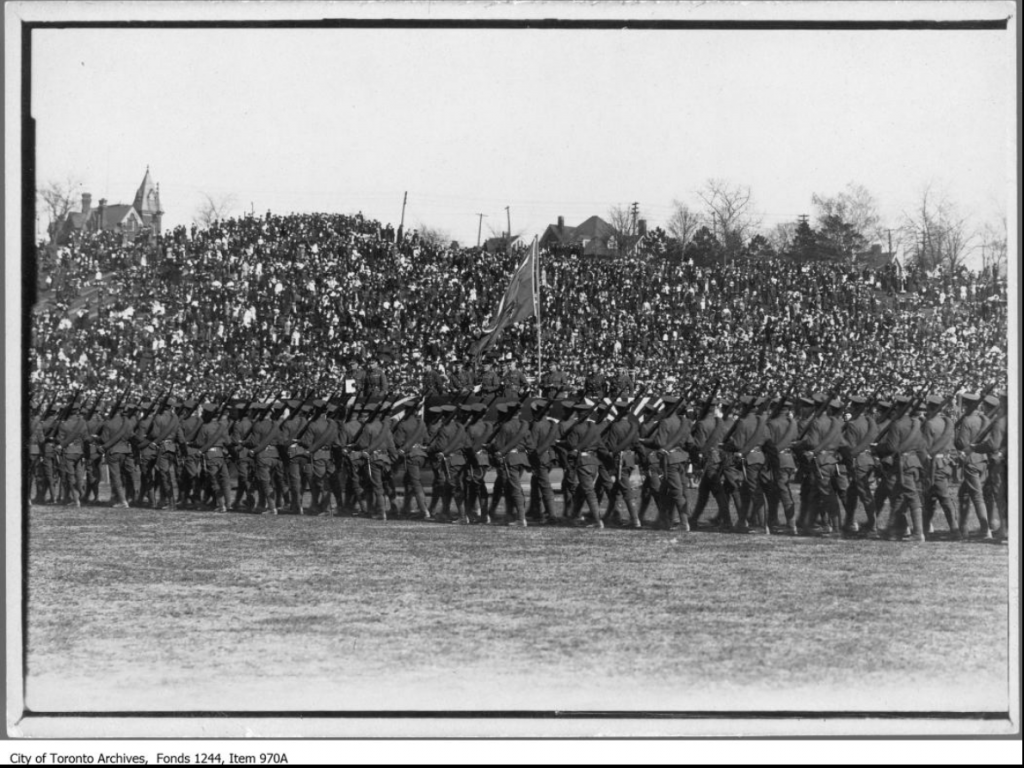 While we still say goodbye to loved ones at Union Station, the goodbyes during the war were plagued with uncertainty. Images show soldiers on trains with crowds in attendance to say farewell and wish them luck. These men travelled to Halifax before boarding a boat to Europe. 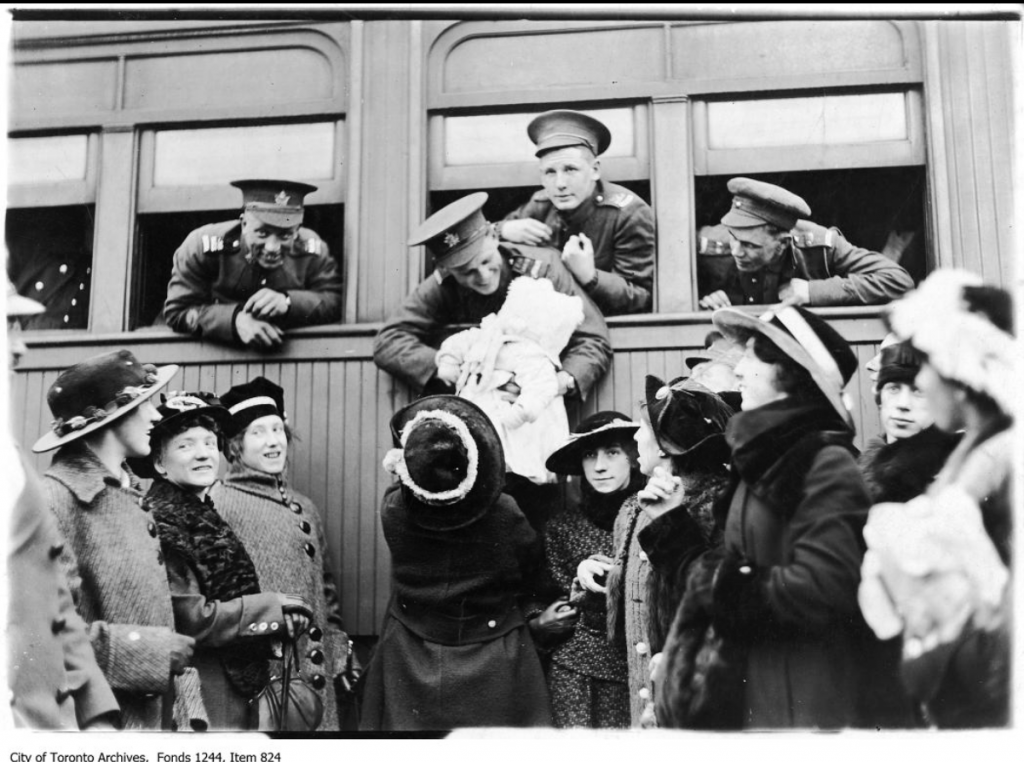 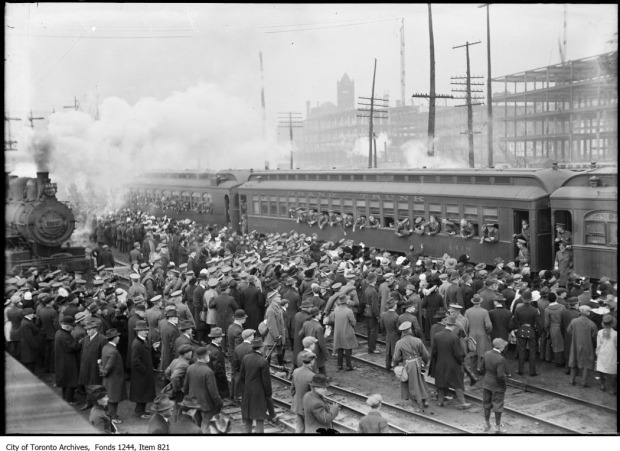 While University of Toronto’s St. George Campus was being used since the war began, it wasn’t until 1917 when a large portion of the campus was given to the British government to establish the No. 4 School of Aeronautics. This school trained military pilots and aircrew on aerial photography, map reading, engine maintenance and more. 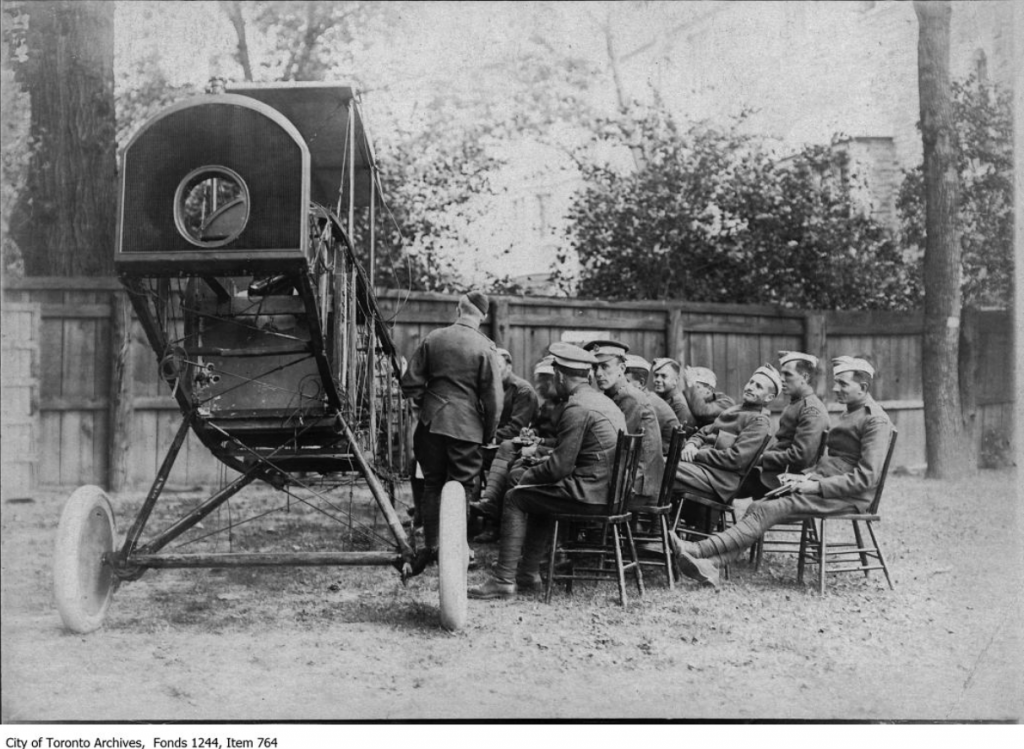 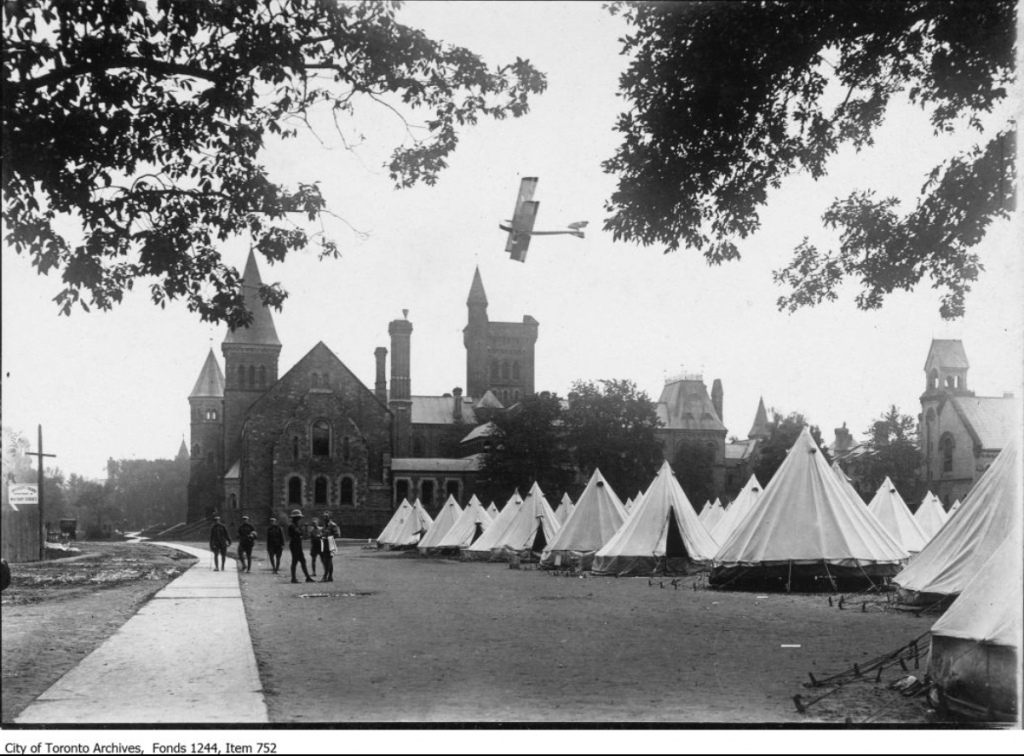 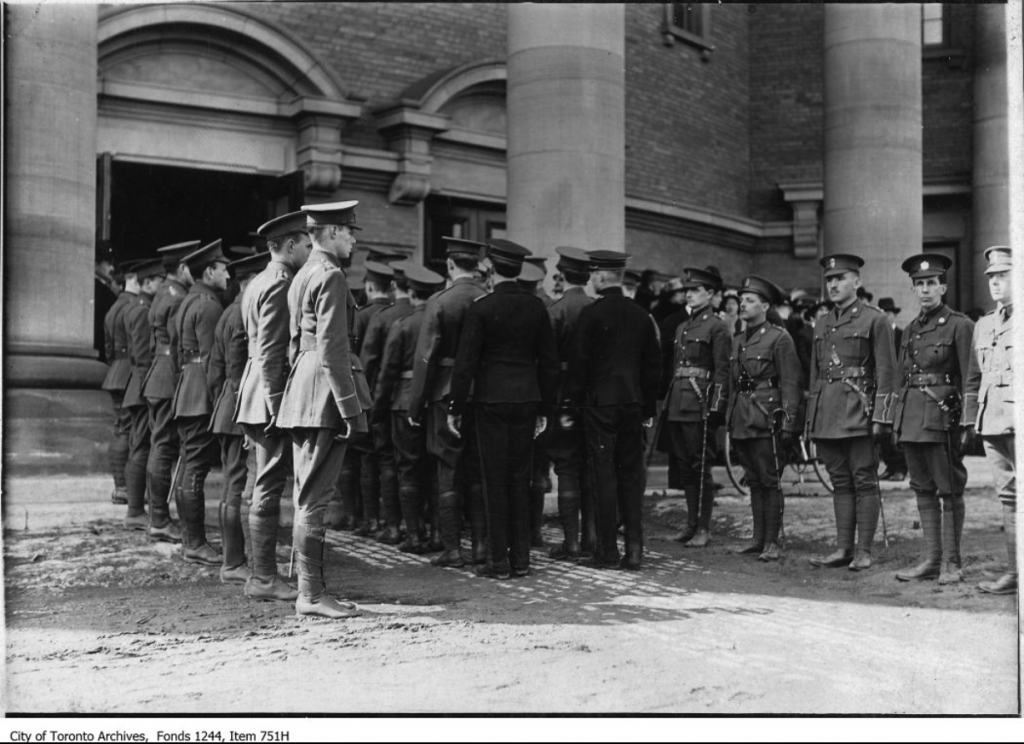 Courtesy Toronto Archives/Soldiers lined up outside of Convocation Hall 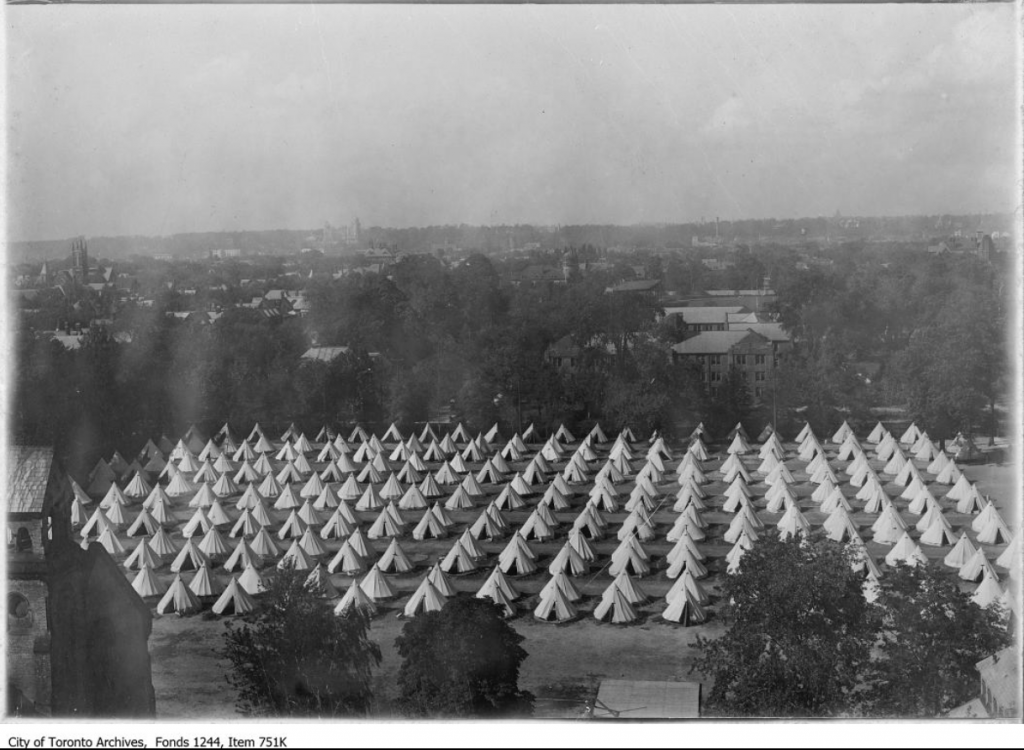 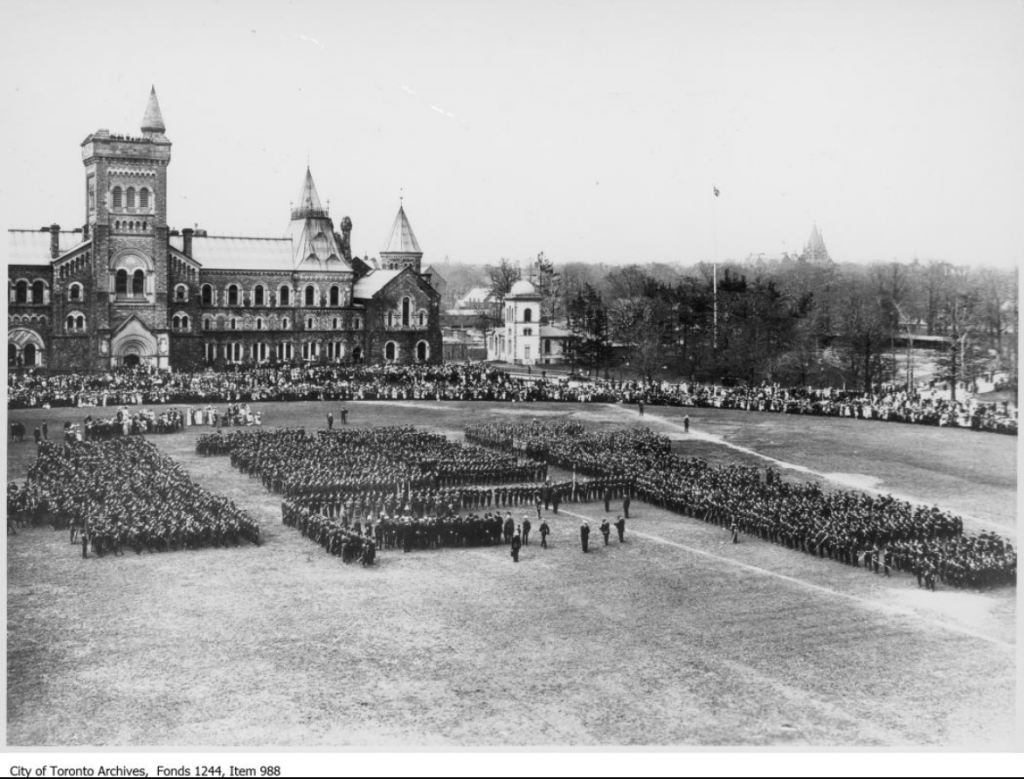 Courtesy Toronto Archives/Troops lined up outside of University College