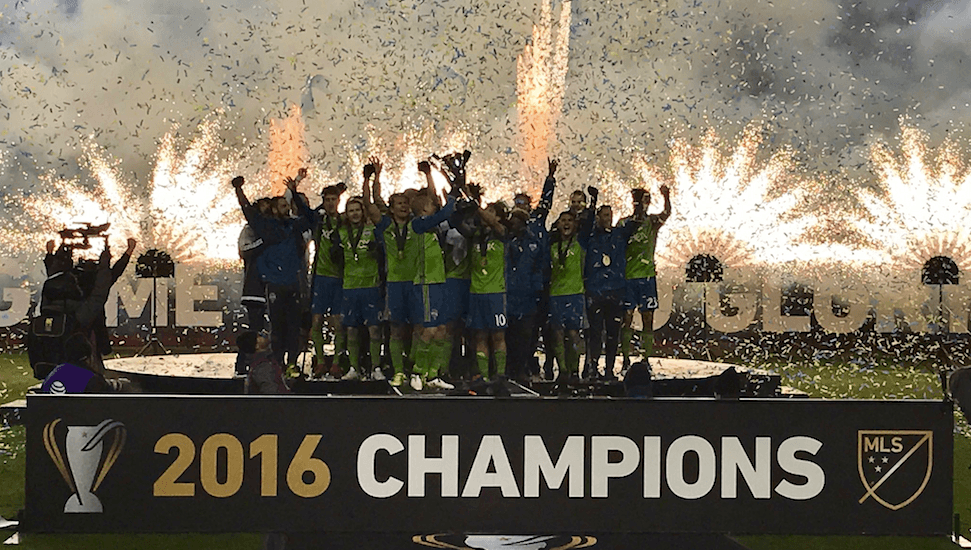 It was a heartbreaking ending to an outstanding 2016 campaign for TFC. After 120 minutes of goalless football in the frozen tundra, the Seattle Sounders were crowned as the 2016 MLS Champions.

MLS Cup was decided after a dramatic penalty 5-4 shootout, and it was Roman Torres, the Panamanian hulking defender who in sudden death put on the hero costume and delivered the championship to a Seattle Sounders side who were dominated by the Reds throughout the 120 minutes of regular play.

Toronto FC will have nightmares of this save Stefan Frei made in extra time.

On a frigid night in Toronto, TFC’s faithful made sure that the Reds had home advantage.

TFC started the match with their foot fully on the gas pedal while Seattle absorbed pressure trying to get their bearings.

It was Toronto who warned early when Jozy Altidore combined with Sebastian Giovinco just inside Seattle’s box. Altidore rifled a shot but the American’s attempt was deflected for a close corner kick in the second minute.

In the 16th minute, the Reds had another good opportunity when Canadian midfielder Jonathan Osorio entered Seattle’s box and finished a beautiful play between Giovinco and Altidore with a half-turn shot that was stopped by a diving Stefan Frei.

At the 26th minute Panama international Roman Torres received a faceful of ball while blocking a Sebastian Giovinco volley that sent the hulking defender tumbling to the ground for a few minutes. With the deep freeze fully on, it must have been extra painful.

Just before the half-hour mark, Altidore once again put Frei to the test with a low header off of a cross into Seattle’s box by Justin Morrow. The keeper was once again up to the task and kept the deadlock with a diving save.

Although the 0-0 scoreline remained through half time, it was clear that one team exercised clear domination throughout the first forty-five minutes. Toronto FC kept control of the ball, transitioned with precision, and created the bulk of the scoring chances.

With the Sounders appearing to struggle settling on the pitch and imposing their game, it seemed like only a matter of time before the Reds opened the score and reflected their superiority on the scoreboard. That TFC goal never came.

The second half started in the same fashion and Toronto continued to press high. At the 48th minute TFC recovered a ball near Seattle’s box and Seba Giovinco almost buried a right-footed shot that hit the side-netting instead.

Tempers started to flair at the 71st minute when TFC refused to play the ball out so that Seattle’s forward Nelson Valdez could get medical attention. Sounders right back Joevin Jones responded by flailing his arms near Steven Beitanshour’s face. The Seattle defender earned a spot in the ref’s book for his troubles.

That was, however, the last action that Valdez saw in the the match. His injury and subsequent replacement by Andreas Ivanschitz was a big blow for Seattle as the Paraguayan Designated Player had been one of the most important players for the Sounders during throughout the playoffs and his timely goals were a big reason for why they reached the final.

TFC had perhaps their best goal scoring opportunity in aggregate time after a series of bounces inside the box almost allowed Altidore to head the ball in. Once again Stefan Frei saved his net and kept Seattle’s championship dreams alive.

Without having a single shot on goal through 90 minutes, Seattle was able to force overtime and augment the drama of this game.

In the second half, TFC substitute Benoit Cheyrou started to make an impact on the game by driving forward and trying his luck with shots from outside the box.

Intensity dropped in overtime as both sides were hesitant to risk a mistake that would cost them a goal, the game, and the championship.

At the 102nd minute, TFC coach Greg Vanney decided to sub off Sebastian Giovinco. This move will be heavily scrutinized as Giovinco is an excellent penalty taker and removing him from the game effectively hindered TFC’s chances in the penalty shootout.

Giovinco’s replacement, Canadian international Tossaint Ricketts, had a glorious chance after he volleyed a ball inside Seattle’s box that shaved the post.

Only two minutes later Stefan Frei once again dressed himself as Seattle’s hero and, which an outstanding save, robbed Jozy Altidore of a goal.

The American striker lifted in the heart of the Sounders’ box and headed the ball up to the top left corner. As BMO field held its breath, Frei stretched and saved his net with a one-handed save.

TFC had its own bit of luck at the 112th minute when Beitashour botched a clearance inside Toronto’s box. The ball landed at the feet of Roman Torres. The Panamanian central back’s first touch was poor and that allowed Clint Irwin to clean up and smother the dangerous ball.

My father says that in football, goals missed are goals against. Although the the scoreline remained 0-0 throughout regulation time, it was all those missed chances (and Stefan Frei’s miraculous interventions) that sealed Toronto’s fate.

Once Seattle was able to send the game to penalties, anything could happen. TFC’s captain and best player of the night, Michael Bradley missed Toronto’s second shot but goalkeeper Clint Irwin leveled things off by saving Alvaro’s Fernandez shot.

In the first shots of sudden death, TFC’s Justin Morrow’s kick rattled the bar leaving the door open for Roman Torres to score and give Seattle their first MLS Cup. Torres stepped up and buried his shot. The team that had been dominated throughout the game ended up coming up on top.

This loss will sting for a long time in the minds of TFC’s fans, however what Greg Vanney and this group of players have achieved is unprecedented for Canadian soccer. More importantly, all the blocks are in place for Toronto to be a dominant force in years to come.