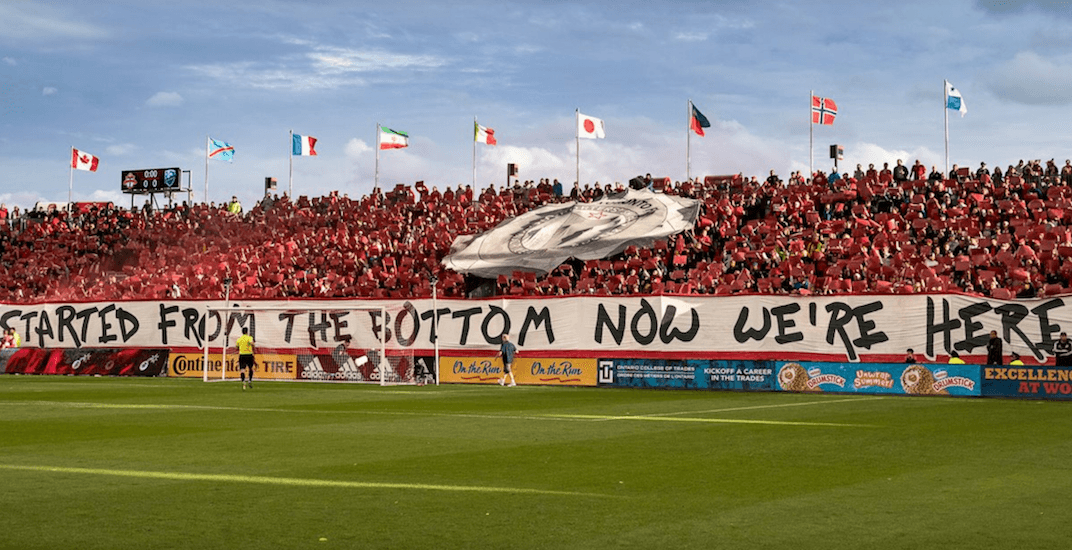 Of course they did.

TFC has done a whole lot of winning, and a 1-0 victory over Montreal in their last regular season home match was the icing on the cake.

The win gave Toronto 68 points, which is not only by far and away the highest point total in MLS, it tied the league record set by the LA Galaxy in 1998. If they get a result in Atlanta next week, TFC will stand alone in the record books.

Another reason to celebrate on Sunday was the presentation of the Supporters’ Shield, given annually to the team with the best regular season record.

So yes, supporters had a lot to celebrate at BMO Field.

And celebrate, they did.

A team that was once the doormat of the league is now at the top. So you bet fans were busting out Drake lyrics. Five years ago, they were dead-last in MLS so yes – they certainly did start out from the bottom.

Now they’re here. Fans will hope ‘here’ is a stop on the journey to winning the MLS Cup.

Here’s a look at some of the best visuals from Sunday:

Started from the bottom now we huuuuurrrrrr 😍

Supporters shield and a huge W in the 401 derby. #tfc #bmofield #mls

"For all the fans that have been here since the beginning, tonight is for them." – captain @michaelbr4dley

The Future Is Bright! @sebagiovincoofficial

TFC fans were in the clouds! Clouds of smoke anyways as @torontofc fans in the south end pass along the Supporters' Shield that was awarded to the team before their game against the @montreal.impact. The #supportersshield is awarded to the @mls team with the highest point total for the regular season. #tfc would beat the #montrealimpact to tie the #mlssoccer record for most points in a season. #torontofc #allforone #tfcfans #torontostar #toronto #sportsphotography @redpatchboys @inebriatti @itslauraarmy #soccerphotography