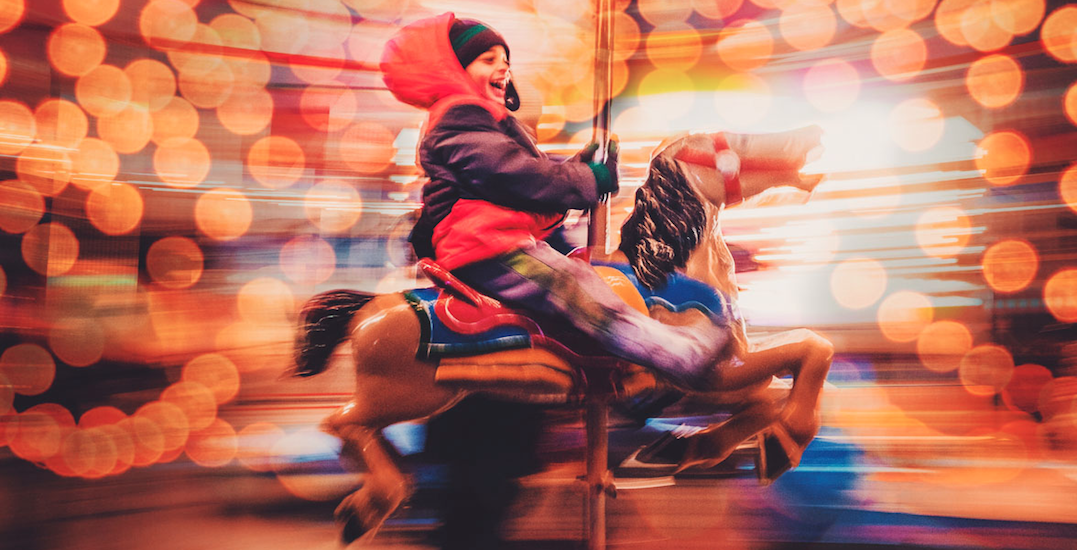 Christmas is all about family.

And the good news is, Santa is in town.

So besides having Home Alone on repeat with the kids, check out these family-friendly Christmas events in Toronto this month!

What: Toronto’s Christmas Market brings the spirit of the season to life! Easily one of Toronto’s favourite holiday events, come and enjoy the magic of Christmas, traditional music and dance performances, and activities for the whole family to enjoy. If you haven’t checked it out yet, make sure to head down soon.

When: Now until December 23
Where: Distillery Historic District, 55 Mill Street

What: If you’ve grown a little tired of the hustle and bustle of the holidays, you might want to pay Toronto’s Black Creek Pioneer Village a visit to experience Village’s annual Old-Fashioned Christmas. There’s plenty to see and do, including some holiday classics like singing Christmas carols, trimming a Christmas tree, horse-drawn wagon rides and visits with Santa.

What:  This massive holiday market and winter carnival located outside Toronto City Hall kicks off on December 1 and runs until the day before Christmas Eve. Look forward to holiday shopping, an ice bar, and plenty of festive foods including a two-handed festive feast dubbed Deep Fried Christmas, plus Beavertails, poutine, fudge, and more.

Santa Claus in the Mall

What: Didn’t get to see Santa in the Santa Claus parade this year? Don’t worry, there’s still plenty of time to pay the big man in red a visit before December 25. He’ll be meeting with good little boys and girls at various malls across the city over the next few weeks.

When: Now until December 24
Where: Various locations across the city

When: Now until December 31
Where: Wellington Park, 50 Bonnie Drive, Simco

When: Now until mid-February
Where: At the foot of Leuty Avenue, The Beaches

When: Now until spring
Where: Harbourfront Centre, 235 Queens Quay West

What: Ho Ho Ho! Santa is coming to the Cambridge Butterfly Conservatory. Kids can have fun decorating cookies and get a chance to meet Santa an Mrs. Claus.

When: December 9, 11 am to 3 pm
Where: Cambridge Butterfly Conservatory, 2500 Kossuth Road

What: This holiday season, join Santa for breakfast under the sea. Ripley’s Aquarium of Canada will be hosting a mouth-watering breakfast with Jolly Old Saint Nicholas. Tickets include: breakfast, complimentary coat check, a family photo with Santa, general admission to the aquarium, and a gift for your child to take home.

Brunch with Santa at the Royal Botanical Gardens

What: Join Santa for a delicious buffet brunch at the Royal Botanical Gardens. Once you’ve satisfied your appetite, you can explore the grounds and take in the festive decorations.

What: Kids are invited to join Santa and Mrs. Claus for an afternoon filled with snow-dusted dusBelgiangian waffles and warm cocoa. Children will then work with Mrs. Claus to create and decorate their very own Gingerbread house and end the evening with story time and dance party.

What: Ever since its premiere in St. Petersburg in 1892, The Nutcracker has been an integral and irreplaceable part of Christmas celebrations worldwide and a work of theatrical exuberance synonymous with the unfettered joys of childhood wonderment.

When: December 9 to 30
Where: Four Seasons Centre for the Performing Arts, 145 Queen Street West

What: Come and enjoy paper crafts and festive treats, as you catch up on your holiday correspondence and mail your letters to Santa.

Visits with Santa at the Royal Botanical Gardens

Santa Claus is coming to town! While the elves are hard at work up at the North Pole, Santa Claus is visiting RBG and is ready to hear what’s on your wish list this holiday season. Just be sure you’re on the nice list.

What: Sharpen your skates and skills as Toronto’s number one outdoor winter party. This year you can expect another stellar lineup of DJs that will bring the heat to your Saturday nights.

What: Come and enjoy a fun evening of games, crafts, and activities, followed by a story, music, and even a delicious turkey dinner!

What: Nathan Phillips Square is hosting a massive New Year’s Eve celebration to ring in 2018. The final send-off to the year-long celebration of Canada’s 150th birthday will kick off at 8 pm at Toronto’s City Hall and will include an exhilarating evening of entertainment with dynamic DJ’s, live electronic music, site animations, a DJ skating party sponsored by Tim Horton’s and a stunning fireworks display at midnight.