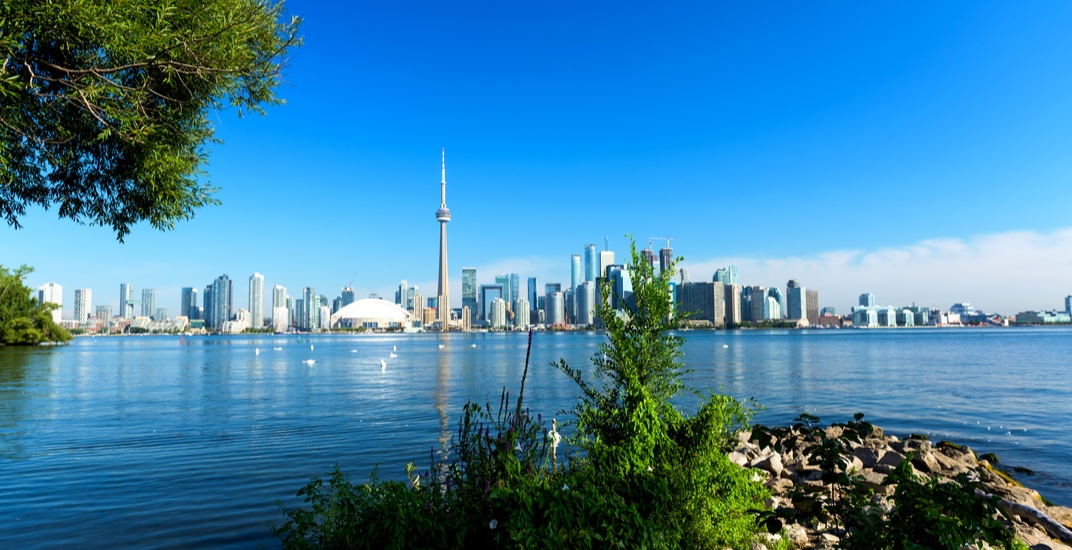 Just because the weekend has come to an end it doesn’t mean the fun has to stop.

In case you’re looking for something to do, we’ve rounded up 24 awesome events happening in and around the city this fine Sunday. 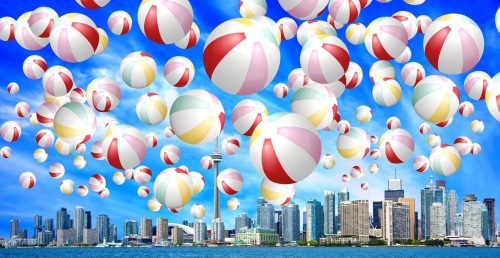 When: Now until June 24
Time: All day
Where: Toronto Waterfront
Price: Free

What: This festival is an annual celebration of traditional and contemporary Indigenous music, dance, theatre, storytelling, film, crafts, and food.

When: Now until June 24
Time: 10 am to 7:30 pm
Where: Fort York, 250 Fort York Boulevard
Price: Daytime sessions are free. Evening sessions are ticketed

What: Le Grande Continental is a public participation show that will take over Nathan Phillips Square for four shows. The performance will feature almost 400 local dancers in a large scale dance piece choreographed and directed by Montreal’s Sylvain Émard. The show concludes with the audience being invited to join the party for a freestyle continental dance party.

When: Now until June 24
Time: 11 am
Where: Nathan Phillips Square
Price: Free to attend

When: Now until June 24
Time: 11 am to 5 pm
Where: Kennedy Road just North of Steeles Avenue East, Toronto
Price: Admission is free 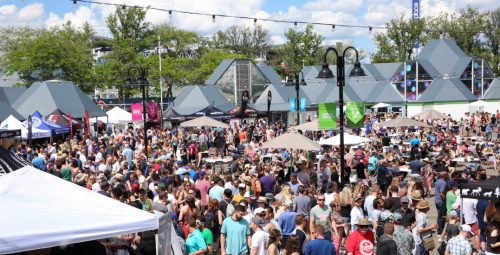 What: Craft beers and ciders, food, fun activities, and live music are all on the bill for this three-day beer festival. Look forward to raising a glass with nearly 30 craft brewers from across Ontario.

What: Burning Doors is a moving performance about human rights from Maria Alyokhina, political activist, member of punk group Pussy Riot, and the Belarus Free Theatre. Burning Doors recently made the New York Time’s “Top 10 Plays of the Year” list.

What: If you’re in the mood to see something local, Out the Window is a documentary theatre performance from Toronto artist Liza Balkan about an incident she witnessed in 2010 of police brutality towards a mentally ill man, that resulted in his death.

What: Acclaimed Scottish illusionist Scott Silven hosts At the Illusionist’s Table throughout the festival, which is an intimate evening of fine dining and whiskey-tasting, interwoven with illusion, mentalism, and storytelling in a private dining room at Toronto’s historic Casa Loma. 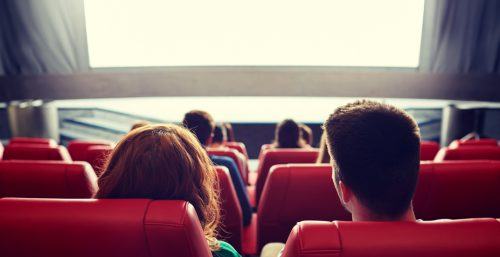 60 Years of Made in Italy

What: June marks Italian Heritage Month in Canada, which is the perfect time to celebrate the Italian community in our exceptionally diverse country. And Yorkville Village is hosting a world-renowned fashion exhibit, 60 Years of Made in Italy, into the heart of Toronto, just in time for the occasion.

What: The TD Toronto Jazz Festival has come to be recognized as one of North America’s premier jazz festival and has attracted some of the biggest names in jazz and blues.

When: Now until July 1
Time: Varies by day
Where: Various locations
Price: Entry is free

What: A new massive exhibit curated by Steve Lazarides, Banksy’s former manager, is now open in Toronto displaying the largest collection of the artist’s works. According to organizers, with over $35 million in art, this is the largest Banksy exhibit ever assembled.

A Forest of Canoes at The Bentway 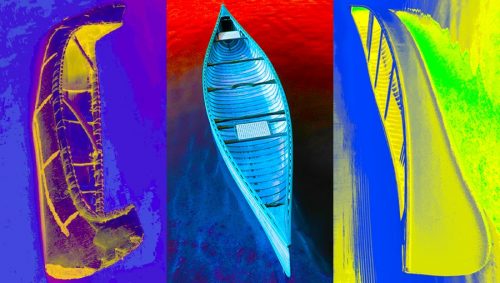 The Bentway presents A FOREST OF CANOES

What: A Forest of Canoes by Dana Claxton, is a site-specific installation set up throughout The Bentway and is co-commissioned with Scotiabank CONTACT Photography Festival and curated by Bonnie Rubenstein. The installation highlights the iconic role and symbolism of the canoe in Canadian, Metis, and Indigenous histories.

When: Now until August 31
Time: All day
Where: The Bentway, 250 Fort York Blvd.
Price: Admission is free

What: This June, the Royal Ontario Museum will be welcoming a new exhibit, Spiders: Fear & Fascination and trust us, it’s definitely not for the faint of heart. The new exhibit will explore the hunting, burrowing, and weaving world of these eight-legged creatures and will feature more than 400 live and preserved spiders, cutting-edge interactive experiences, and new scientific discoveries.

What: This month, Manolo Blahnik and the Bata Shoe Museum will be joining forces, bringing the highly anticipated travelling exhibit Manolo Blahnik: The Art of Shoes to Toronto.

What: Come and enjoy free yoga classes all day, outdoors by some of the best yogis in Toronto in the heart of Toronto’s historic Distillery District. 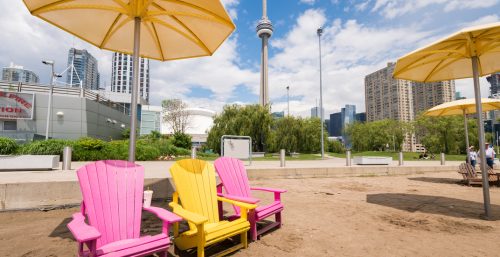 What: Back for its third year in 2018, the Waterfront Artisan Market runs every weekend until the first week in October. The outdoor festival, presented by The Waterfront BIA and operated by the Scadding Court Community Centre, will feature 50 bakers, chefs, and artisans hawking summery street foods and locally-made products.

What: Step back in time to the roaring twenties, dust off your best Daisy Buchanan-inspired frocks, and head to Toronto’s very own Spadina Museum for its annual Gatsby Garden Party where champagne and boozy cocktails will be flowing in full force. You can expect to enjoy live jazz music, dancing, croquet, and of course plenty of costumes. Guests are invited to dress up in full Gatsby attire from flapper dresses to feathered hats — with prizes available for the best costume.

What: The 15th season of Pedestrian Sundays brings back one awesome way to spend your Sundays this summer. Performers, musicians, artists, and shopping, basically an awesome Sunday Funday. 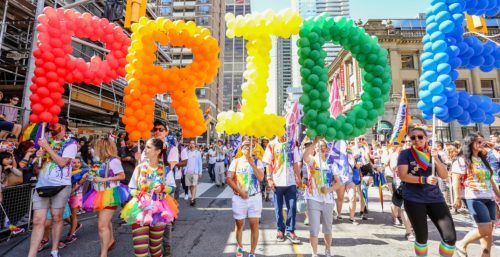 What: Now in its 18th year, Family Pride is a fun-filled oasis on the grounds of Church Street Public School that gets bigger and better every year. With programming geared to those 12 and under and their families, everyone will feel like a kid while taking in the creative and engaging activities, including sports, crafts, face painting, storytime, and extra-special performances.

What: Costumes, choreography, and colour! Stand loud and proud with more than 120 groups marching in Pride Toronto’s Pride Parade, one of the largest in North America. There will be unforgettable performances, floats, marchers, and all the glitter you can handle.

When: June 24
Time: 2 pm
Where: The parade begins at Bloor and Church, South on Yonge Street to Yonge and Dundas Square
Price: Free

What: Christie Pits Film Festival will kick off its new season on Sunday, June 24, with a 30th-anniversary screening of the cult comedy classic Hairspray, a film that tackles racial integration in 1960s Baltimore. The film festival will conclude on August 19, with a two-night Closing Weekend, including a surprise “Closing Night” screening of an iconic urban film, which will be announced at the end of the Christie Pits Film Festival season.