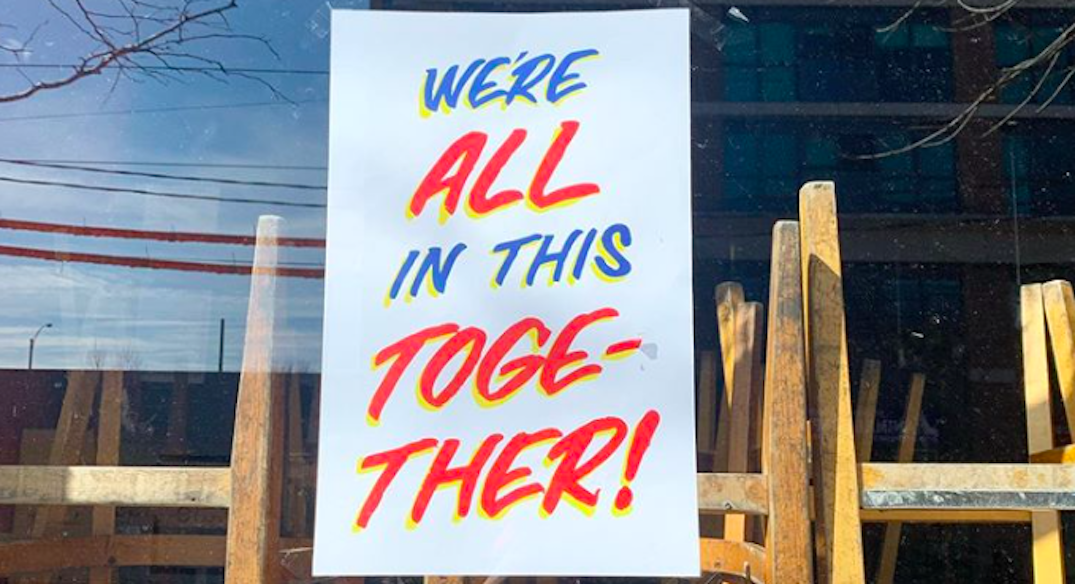 Sign seen on a storefront in Queen Street West (@heyjulesxo/Instagram)

As COVID-19 cases have been on the rise in Toronto, police have noticed a decrease in most major crime.

While it is too early to determine any trends in crime, Toronto Police Service spokesperson Meaghan Gray said that since March 16, the weekly statistics show a decline in all major crime categories — except homicides, which have remained stable.

The numbers could be attributed to social distancing and self-isolation since most of these crimes are against people like assaults and robbery.

But Gray noted that even crimes against property, such as auto theft or break-and-enters, have also dropped.

“Since social distancing and self-isolation have been imposed, the service has noticed a decrease in the number of calls to the non-emergency number,” she said.

“There could be several reasons for this decline, including fewer people in a single place calling about one incident and a reduction in parking complaints.”

However, even with the decrease in call volume, there has been no significant change to the calls for service.  This means police officers are responding to the same amount of calls as they were this time last year.

Gray emphasized that it is important to remember is that crime statistics fluctuate over time and for a variety of different reasons.

“Toronto Police officers continue to respond to calls and protect our city.”

While Toronto stores and restaurants are closed, many have put up a poster stating “We’re all in this together!” in the Honest Ed’s font.

Created by a local Toronto artist, the posters are now spotted in several neighbourhoods, including the usually-bustling Kensington Market.

And while Toronto is experiencing less crime at the moment, across the country, Vancouver is facing a very different reality.

Property crime rates in the city have actually risen amidst the coronavirus pandemic.

In a release last week, the Vancouver Police Department (VPD) said it reported 86 commercial break-ins around Vancouver from March 1 to 15.

The number of break-ins spiked the following week, with 81 taking place from March 16 to 24.

A total of 35 of those incidents took place in downtown Vancouver, where the biggest increase in break-ins has been reported.

Many businesses across the region have voluntarily shuttered on their own accord as a preventative measure for their staff and customers, while others were forced to close due to new government restrictions.

While boarding is not ideal, she said the RSBA understands why businesses believe it is necessary to do so as a preventative measure, especially given the uncertainty of the required closure duration. 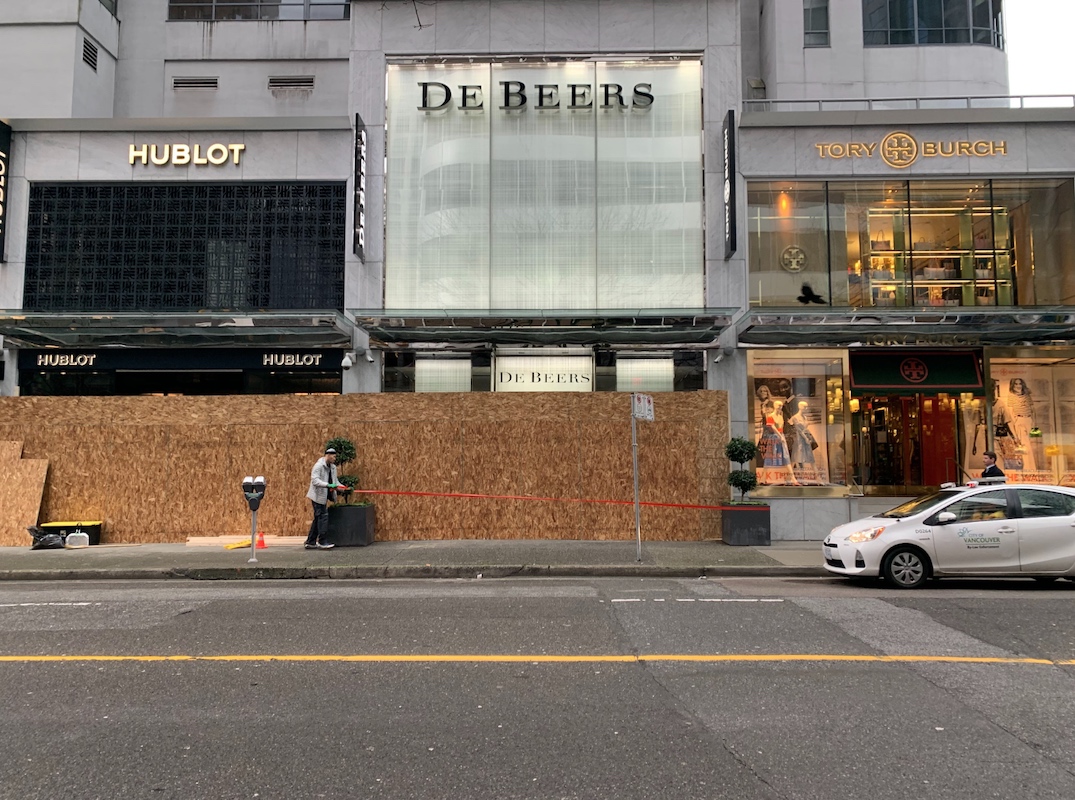 “However, it appears thieves are attempting to take advantage of commercial spaces that are closed due to social distancing measures. We are targeting these offenders aggressively on several levels.”

Boarded up storefronts are also a quickly growing preventative practice in other retail areas outside of downtown. 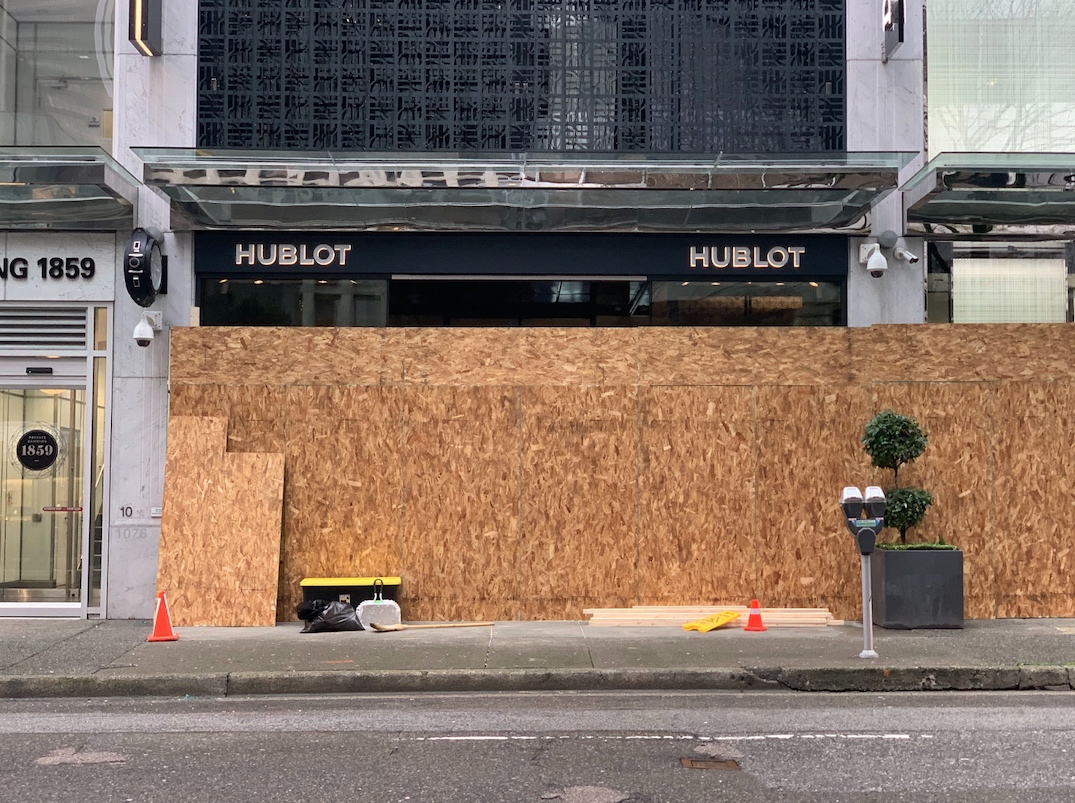 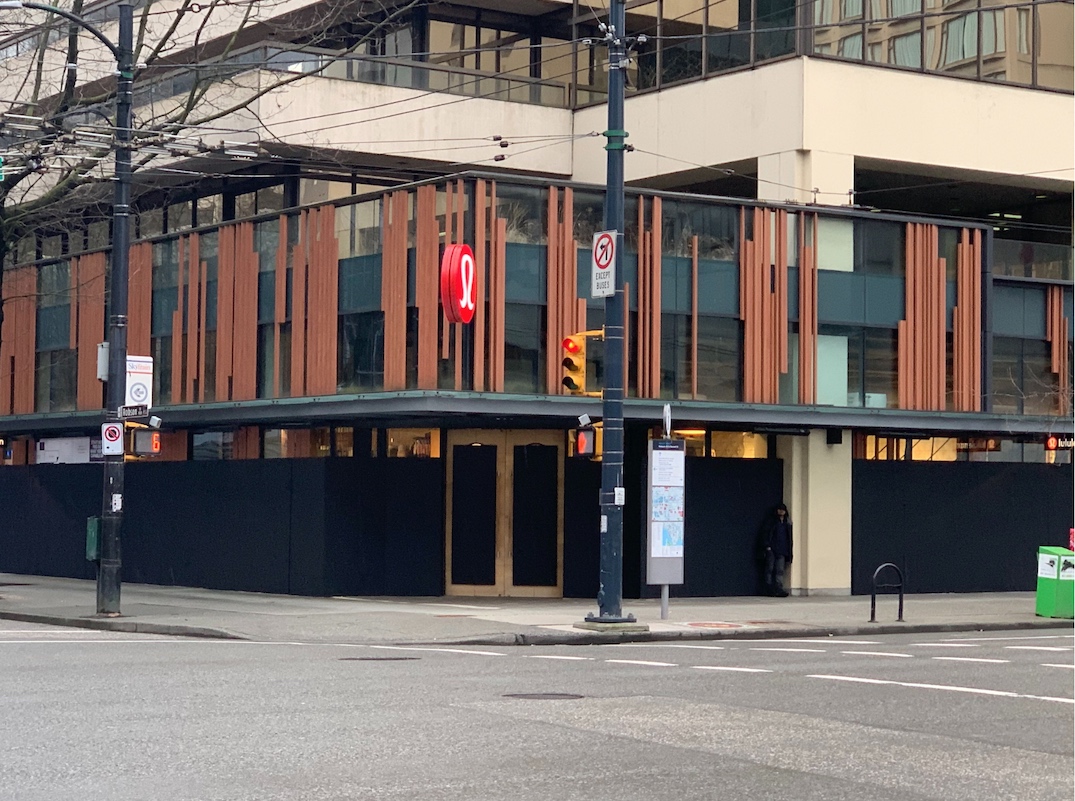 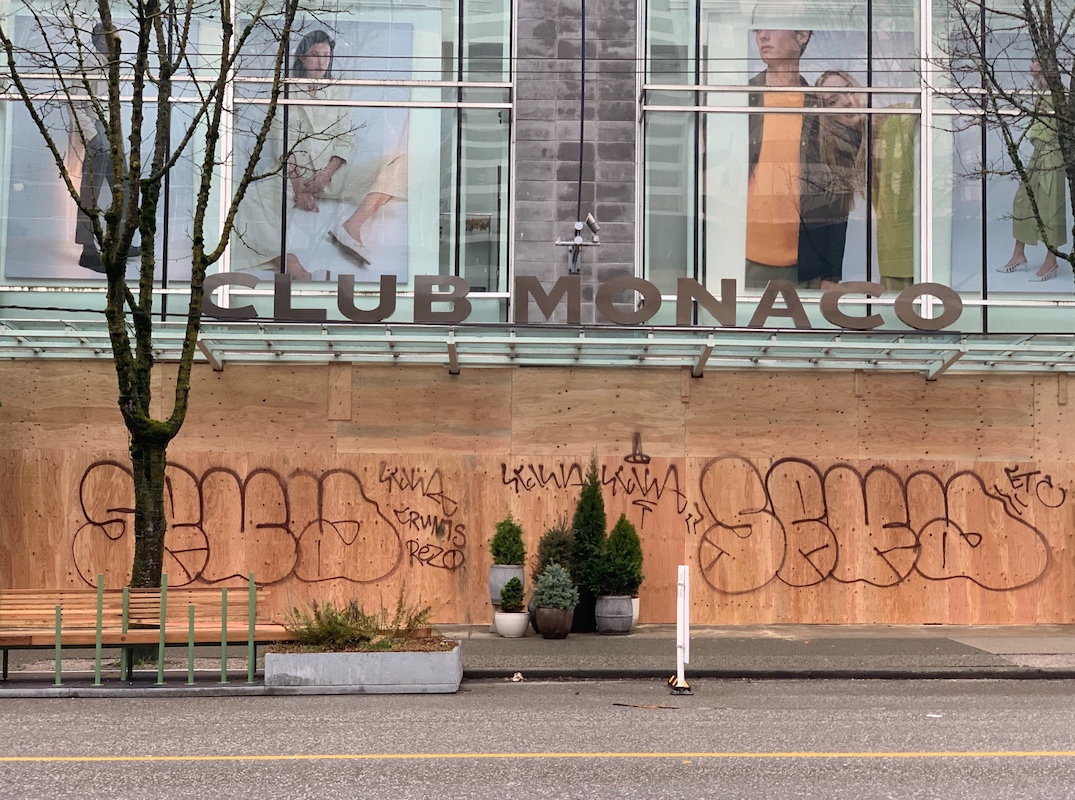 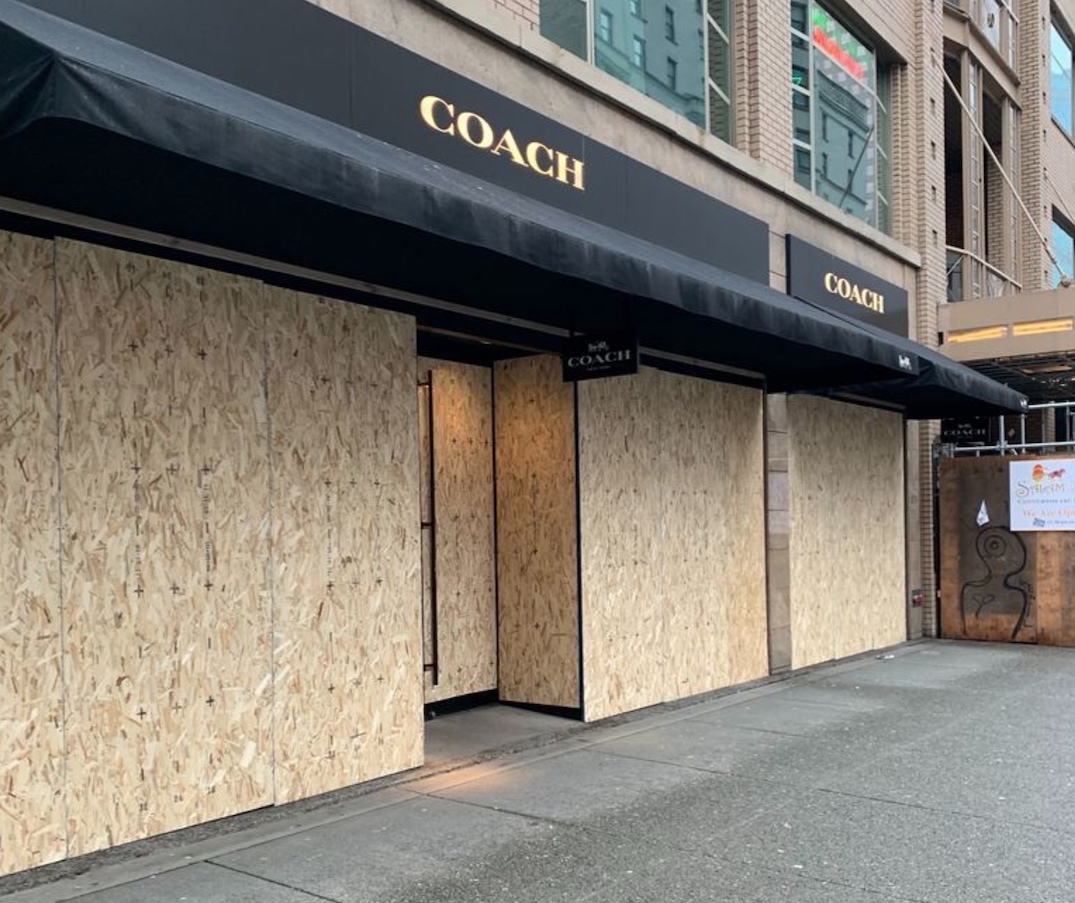 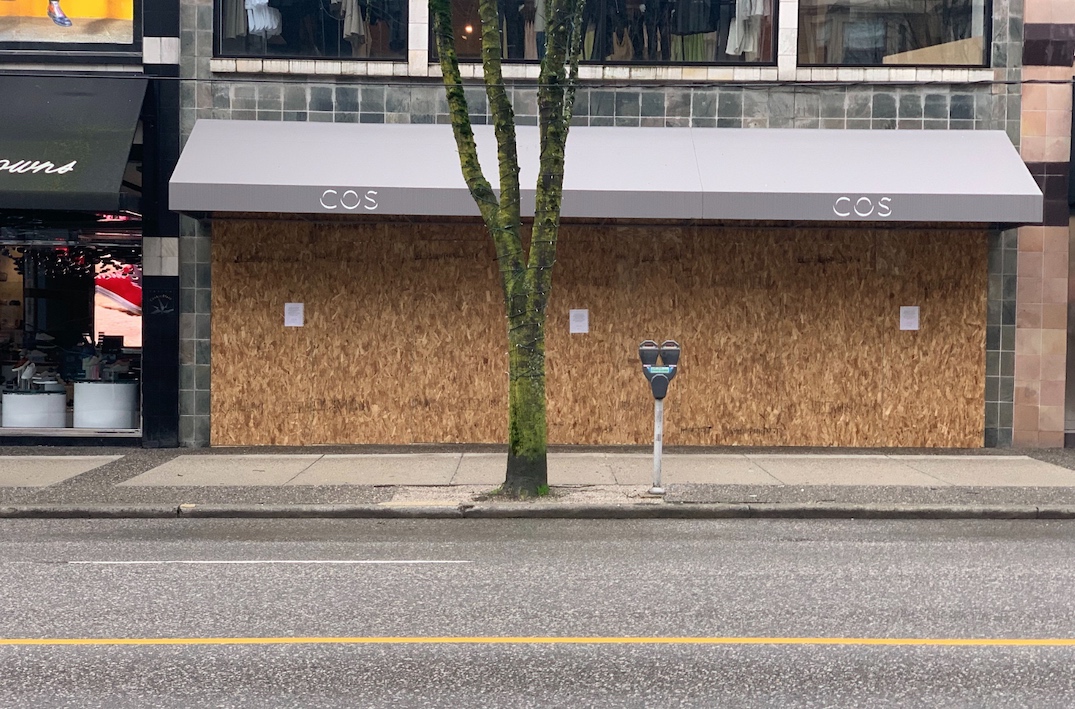 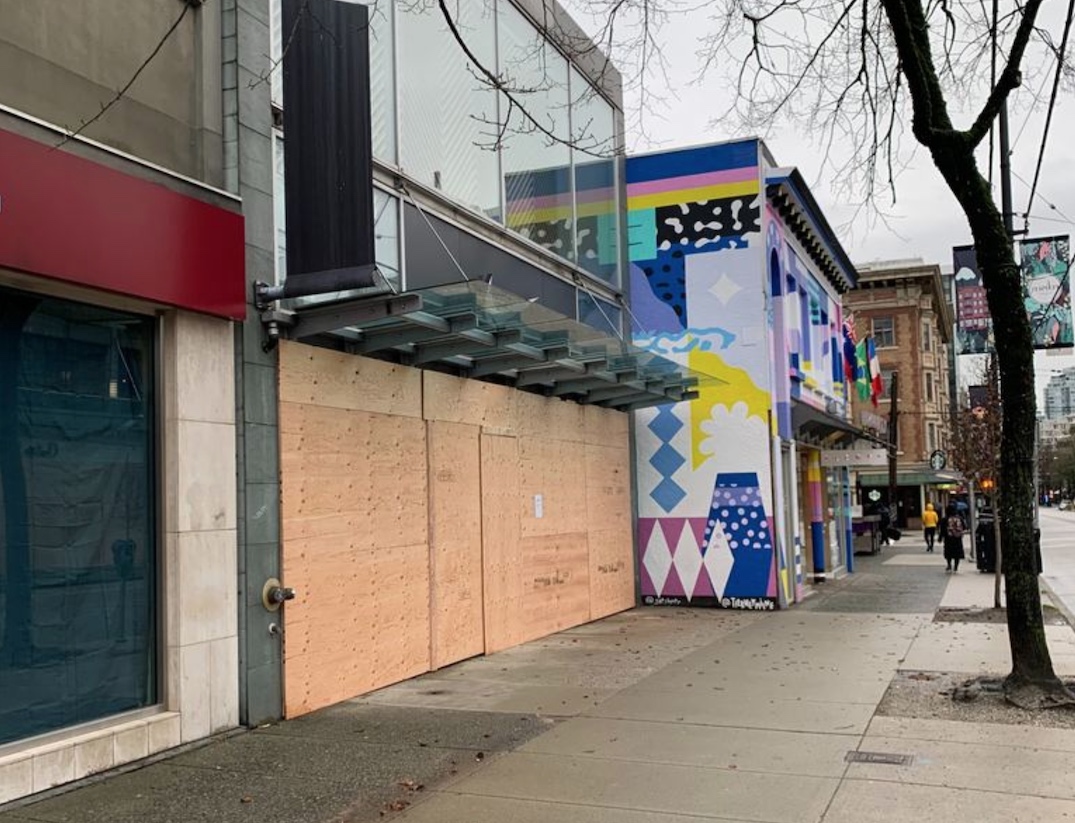 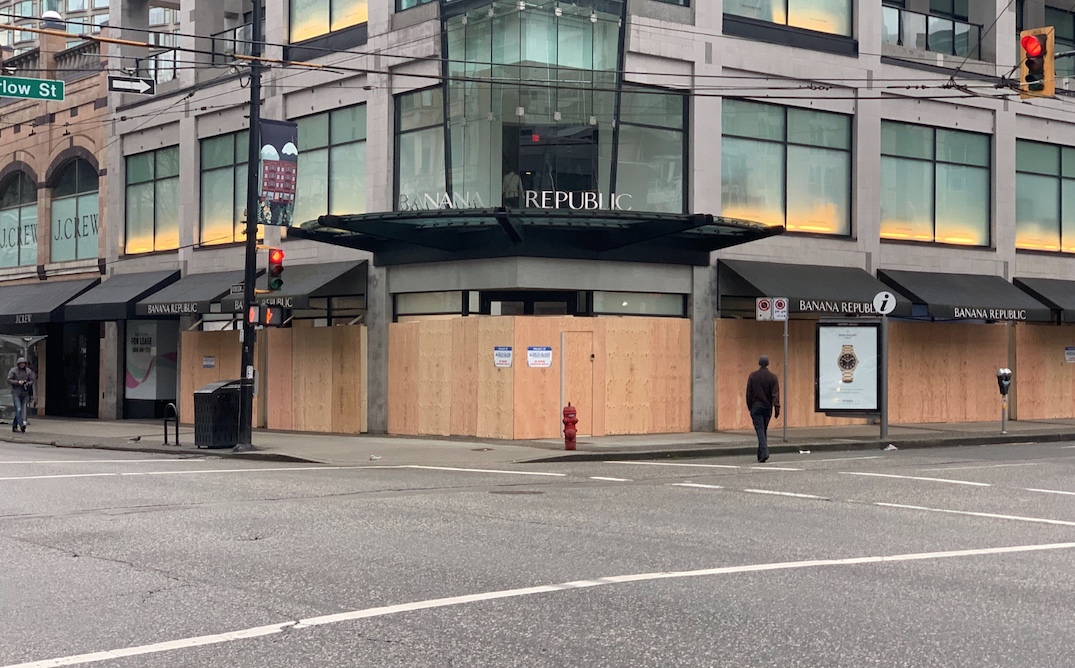 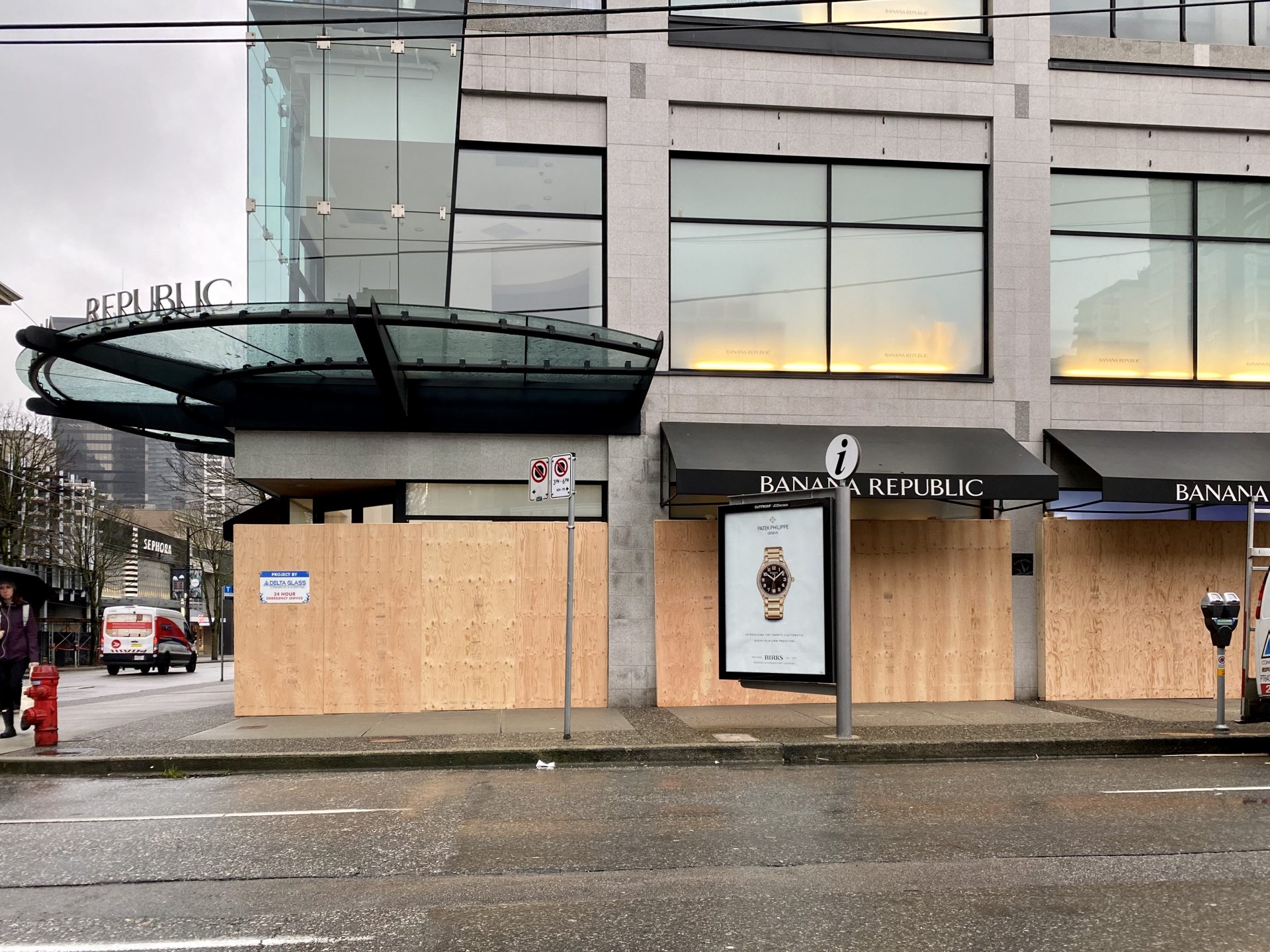 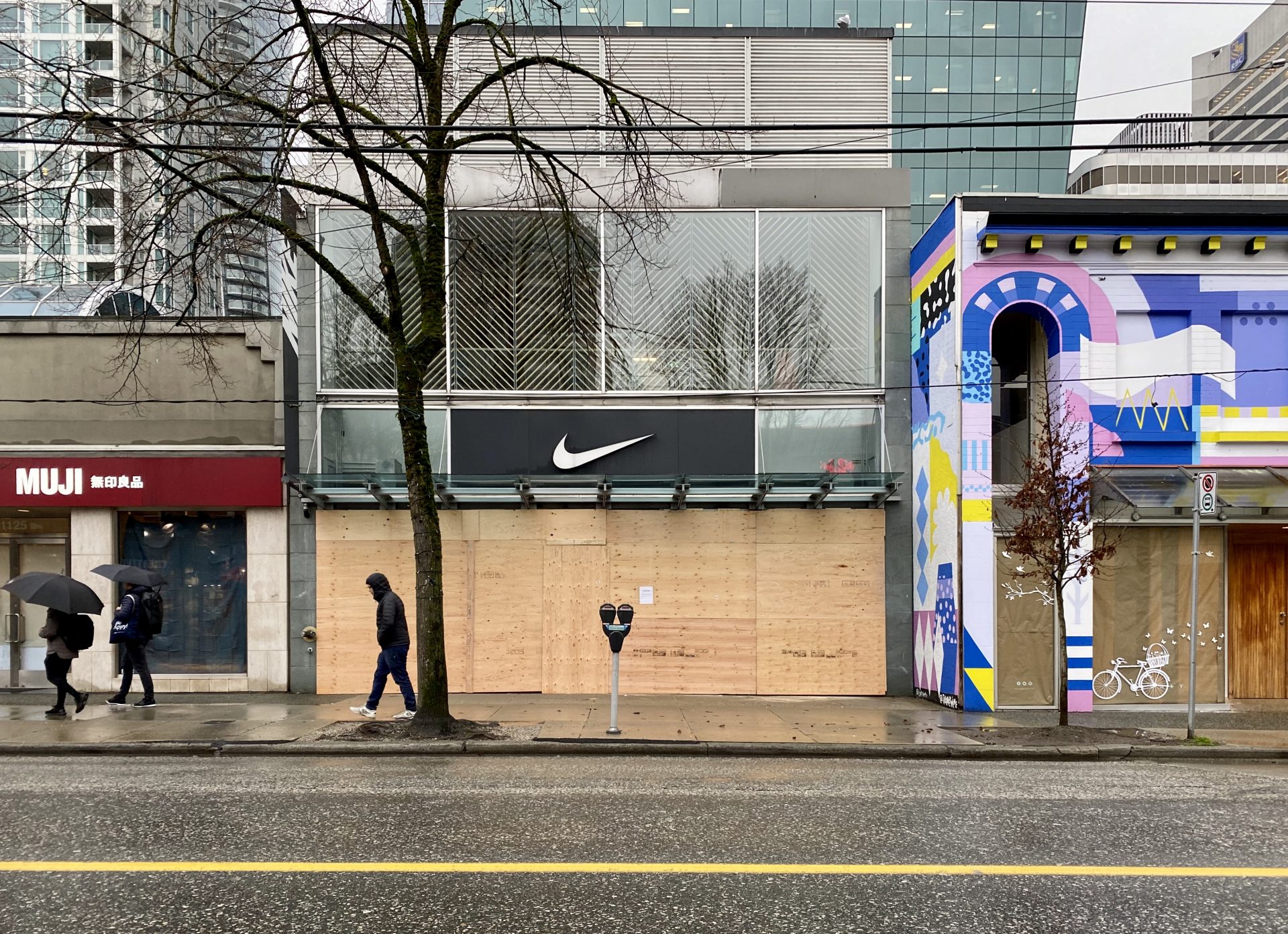 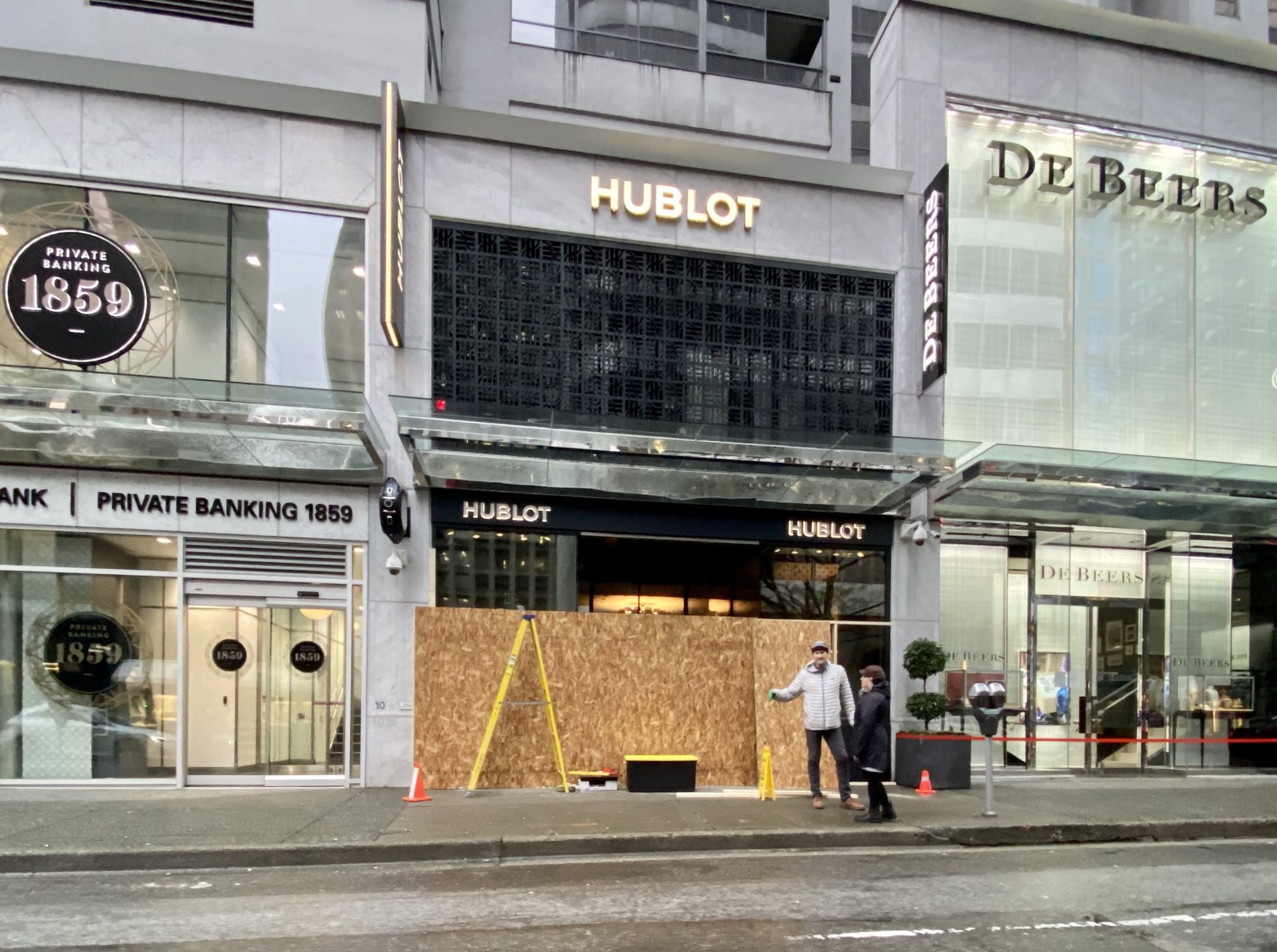 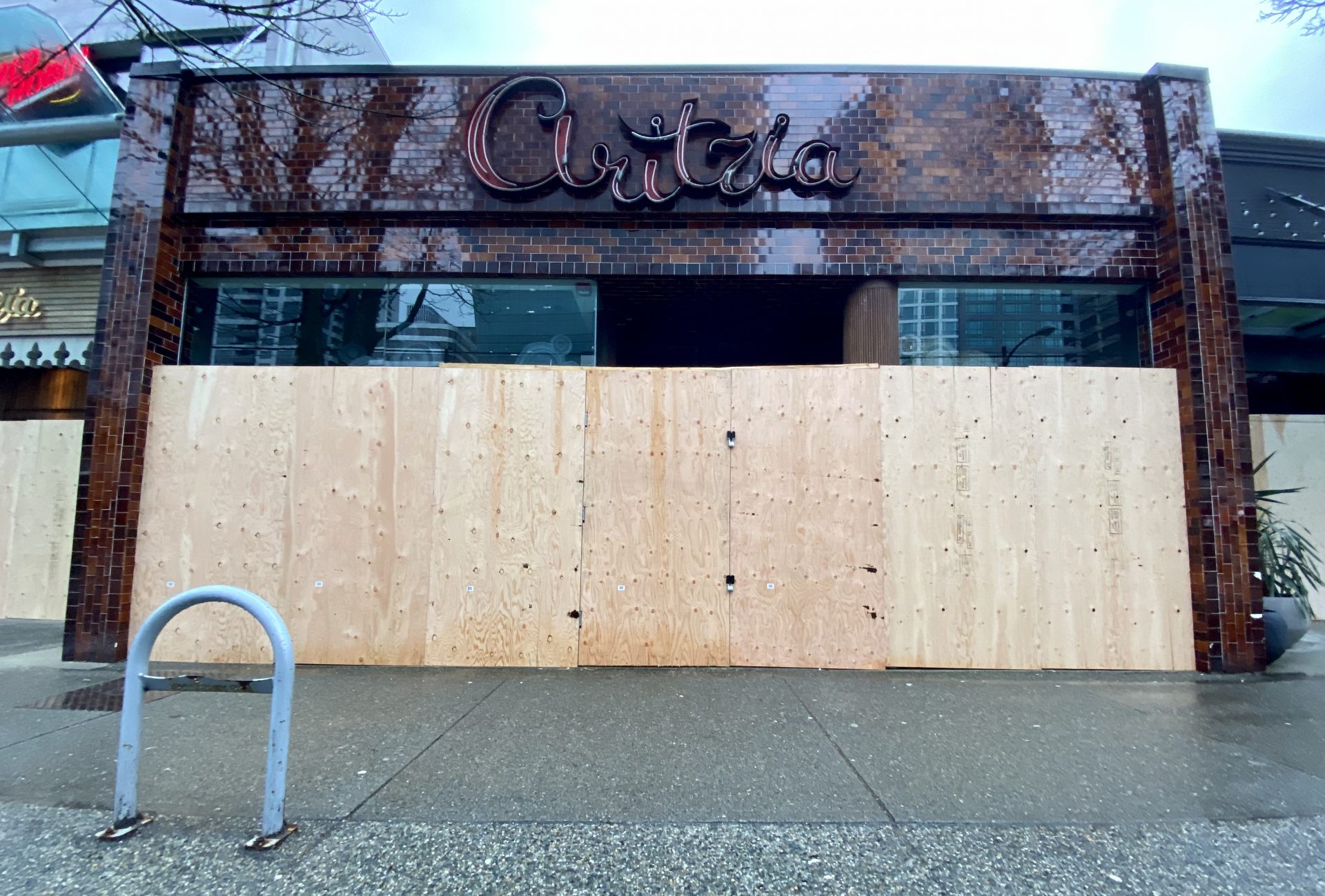 With files from Kenneth Chan and Simran Singh.