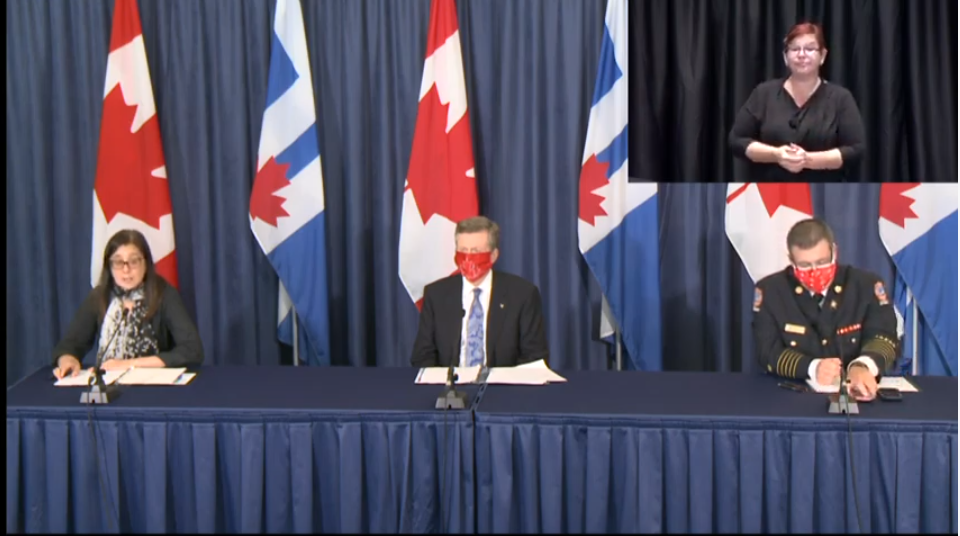 There is an “immediate and rising risk” in Toronto of COVID-19 resurgence as the city confirmed 381 new cases on Monday.

“This is not the time to panic, it is the time to act,” said Toronto’s Medical officer of Health Dr. Eileen de Villa. “By taking action, we can limit the damage.”

During the city’s press conference, Mayor John Tory also said that the “alarm bell is ringing” and that Torontonians would need to take actions in their own lives to reduce coronavirus infections, and flatten the curve.

De Villa said she will be recommending to City Council several restrictions for Toronto including reducing the total number of patrons inside bars and restaurants from 100 to 75, as well as getting contact information from each customer, and limiting the number of people per table from 10 to 6.

Music will also be recommended to be not louder than conversations to reduce the risk of leaning in, and people speaking loudly, which Dr. de Villa said heightens the risk of infection.

De Villa said that there is nothing inherently wrong with the hospitality industry, but there is a “potential level of risk distinct to it.”

The recommendations by de Villa will also include extending face mask bylaws, as well as measures to urge the province of Ontario to make masks mandatory in non-public workplaces.

Mayor Tory said that the city is trying to take actions that would limit the size of the resurgence without having to go back to a total lockdown that Toronto “can’t afford.”

In a statement, Board of Health Chair Joe Cressy said he supports the new public health measures to combat coronaviru in Toronto.

“Among the new measures to fight transmission, our Medical Officer of Health is advising Torontonians to limit all interactions with anyone outside their immediate household and essential supports. This does not apply to schools and workplaces, but to social interactions that are driving increases in many cases,” said Cressy.

“For Toronto, this means the 10-person social bubble is over. The time has come to take stronger action, together.”

City Council meets on Wednesday, and is expected to vote on de Villa’s recommendations.

“We are at a tipping point – the trajectory of the curve in our city depends directly on actions that we take today. If we want to keep schools open, ensure access to public services, and protect the capacity of our health care system we can’t afford to continue with the status quo,” said Cressy.

In his daily address, the premier said that “we know that this will be worse than the first wave, but what we don’t know yet is how bad the second wave will be.”

Ford said that our actions will decide if this is “a wave or a tsunami.”

The Government of Ontario reported 700 new COVID-19 cases on Monday, with Toronto reporting the most across the region.

Monday has the highest new daily case numbers to date.