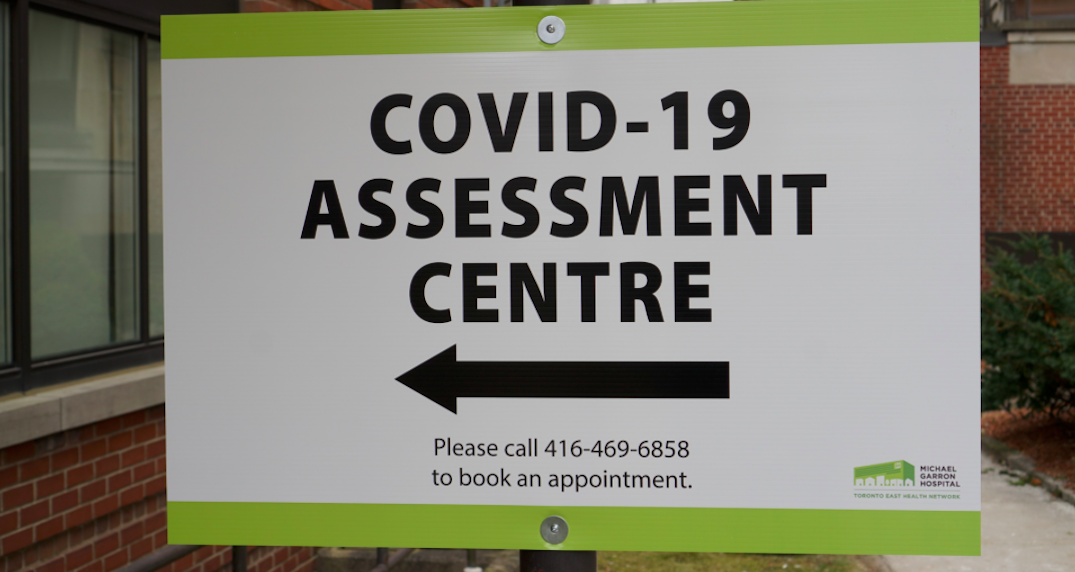 A few of the COVID-19 assessment centres in Toronto have seen an increase of walk-in traffic, as Ontario begins to increase asymptomatic testing.

The Michael Garron Hospital assessment centre saw a “significant increase” in visits on Monday, which was “more than double than that of our previous daily volumes,” a spokesperson told Daily Hive.

The centre is open for residents in East Toronto on a daily basis, providing testing for those who have one or more symptoms, or for those with no symptoms but are concerned they have been exposed to someone with coronavirus.

THREAD 1/2: #COVID19 testing at MGH
Our COVID-19 Assessment Centre offers assessments/testing for people in East Toronto who have one or more symptoms related to COVID-19 OR who have no symptoms but are concerned about possible exposure to someone who is sick/under investigation. pic.twitter.com/ozvspnNKmy

So far, on Tuesday, there have been 123 visitors and with another few hours left in the day, Gorman believes more than 201 people will come to the centre.

“We do see a larger volume of people coming many stating that they saw the premier speech and they want to get tested,” Gorman said.

“Since Premier Doug Ford announced expanded COVID-19 testing on Sunday, May 24, there has been an increase in the number of people visiting the Assessment Centre at Toronto Western Hospital,” the spokesperson for the hospital told Daily Hive.

According to the spokesperson for the hospital, on Saturday, May 23, there were 50 tests taken, then on Sunday, May 24, there were 93 tests conducted and on Monday, May 25, there were 116 tests done.

Over the weekend, the province issued expanded guidance on asymptomatic testing for individuals living in the community.

“In addition to testing all people with at least one symptom of COVID-19, assessment centres will also conduct asymptomatic, risk-based testing,” Hayley Chazan, the senior manager of media relations told Daily Hive.

On May 24, a memo was released providing additional testing direction based on guidance provided by the Chief Medical Officer of Health, Dr. David Williams.

“Our approach to testing will continue to evolve, based on evidence from Ontario and other jurisdictions and the public health indicators that we are monitoring closely,” the memo says.

“Effective immediately,” testing is available for symptomatic testing if an individual has at least one symptom of coronavirus, even for mild symptoms.

Also, for people who are at risk of exposure through their employment, including essential workers.

The memo states that “no Ontarian who is symptomatic or who is concerned they have been exposed to COVID-19 will be declined a test at an Assessment Centre” either through appointment or walk-in.

“As we continue to take an iterative approach to testing, expanded testing will provide valuable information about the spread of the virus in different communities across the province and help us to protect vulnerable populations and all Ontarians,” the memo outlines.

Chazan added that the province also recently completed proactive surveillance — testing of symptomatic and asymptomatic — of residents and staff in long-term care homes.

And, that a complete surveillance testing of staff working at emergency childcare centres and residents and staff in congregate care settings, including retirement homes, group homes, and correctional institutions, is being undertaken.

The Ontario government will release the next phase of the testing strategy later this week.