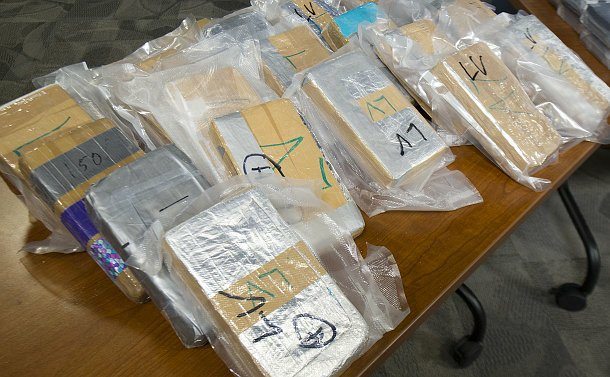 Nearly $9 million worth of drugs were seized in what is possibly Toronto’s largest cocaine bust in history.

A total of 73 kilograms of cocaine was seized, as well as 21 kilograms of crystal meth and eight kilograms of ecstasy, according to the Toronto Police. The investigation titled “Project Polar” took six weeks to carry out, and led to the arrest of 32-year-old Nicholas Shouldice on Tuesday.

“I have been working in drug enforcement since 1991, and this is the largest single seizure,” said Acting Inspector Steve Watts at a press conference on Thursday. “Notwithstanding Canada Border Service Agency seizures at the border or product that is destined for Canada, in terms of a Toronto-based investigation, this is the largest seizure of cocaine. ”

Watts says in the 1980s, seizing one kilogram of cocaine was “monumental,” highlighting the prevalence of the drug in modern-day Toronto.

The TPS says the man who was arrested has no criminal record to speak of, and was hiding the drugs in the trap of a pickup truck, as well as in a home.

“We are however alleging that he was entrusted at a very high level in order to be in possession for the purpose of trafficking of that amount of controlled substances,” adds Watts.

The 73 kilograms of cocaine seized on Tuesday is in addition to a whopping 678 kilograms seized in the Greater Toronto Area over the course of 2016.

Back in July, 20 kilograms of cocaine was seized at Pearson International Airport.