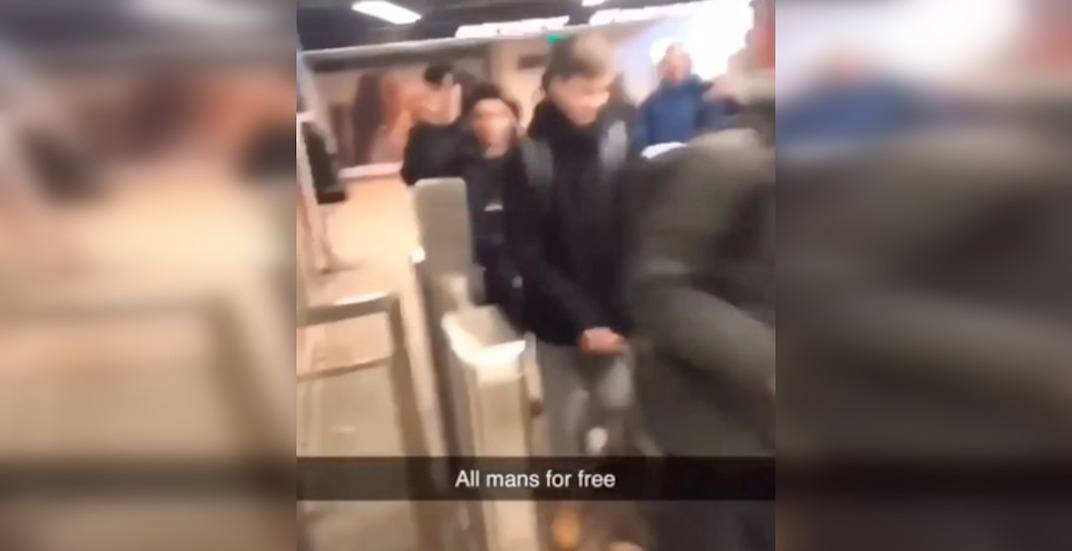 Some people will go to great lengths to avoid paying for the TTC.

In this case, a group of teen boys all snuck through a TTC fare gate after one of their friends swiped his PRESTO card.

This is one example of the many ways people are committing TTC fare evasion, which led to an estimated $61 million worth of lost fares in 2018.

In a video that’s already been viewed well over 18,000 times since Thursday, you can see a teen swipe his PRESTO card as he walks through a subway fare gate.

He is then followed through the open doors by what appear to be 11 other boys, as they all sneak through the gate to reach the subway platform. A caption on the video reads “All mans for free.”

“This is an example of one way people are cheating the system and contributing to the fare evasion that is depriving TTC customers of tens of millions of dollars a year,” said Stuart Green, a spokesperson for the TTC.

“We have no tolerance for deliberate acts of evasion and if caught, fare cheats will be subject to a $235 fine.”

This video surfaces just a week after Toronto’s auditor general released a report that revealed fare evasion rates were much higher than the TTC has previously stated, and cost the transit agency the aforementioned $61 million last year.

According to the report, this amount does not include a further $3.4 million in lost revenue from Metrolinx’s malfunctioning Presto fare gates and card readers.

Altogether, this pushes the TTC’s total 2018 fare revenue losses to an estimated, “probably understated”, $64 million, which is a relatively significant amount considering 95% of the transit system’s revenues are from passenger fares.

Following the initial report, the auditor general has put together a number of recommendations for the TTC to consider in order to deal with fare evasion and in turn, result in an increase in passenger revenue.

Green says the TTC has accepted the auditor general’s recommendations and they are working to strengthen their fare enforcement, including hiring 70 new staff and using technology like outward facing cameras to cut down on this behaviour.