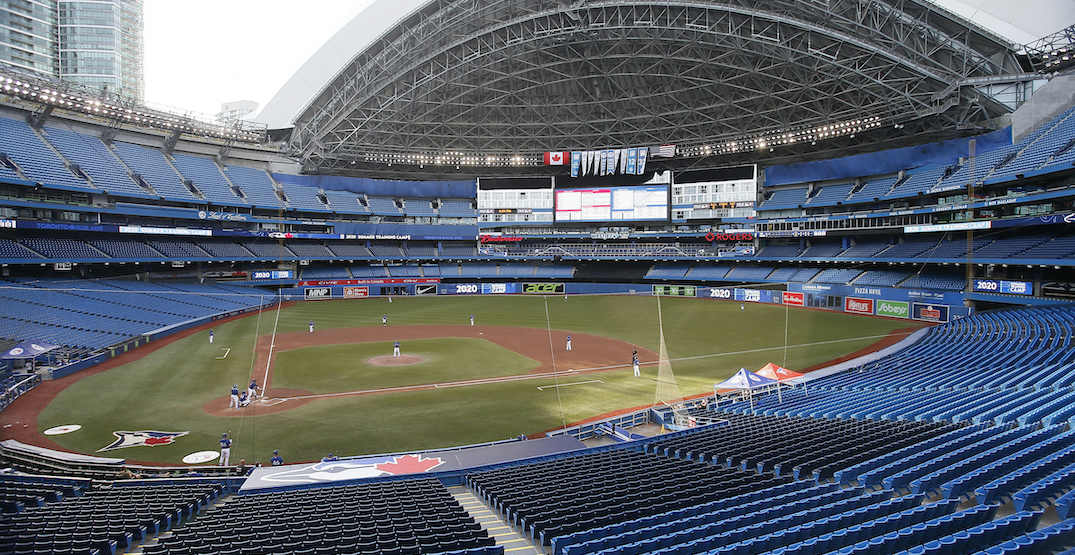 The seventh-oldest stadium in Major League Baseball will live on for now, but will see some substantial renovations in the future. Rogers Centre doesn’t appear to be going anywhere soon.

According to report from Don Muret of the arenas and stadium site Venues Now, the Blue Jays will spend hundreds of millions towards renovating Rogers Centre rather than levelling the dome and building a brand new ballpark.

This comes a little over one year after Andrew Willis of the Globe and Mail reported Rogers was looking to level the 32-year-old stadium and rebuild a state-of-the-art ballpark, as well as condos and other developments on the property at 1 Blue Jays Way.

Muret’s report details a renovation in the neighbourhood of $200-$250 million for the Rogers Centre. The project will be spearheaded by Toronto-based PCI Construction Group.

As fun as it would be to have a sparkling new ballpark by the waterfront with all the bells and whistles, that would mean finding an alternative location for the Blue Jays to play their home games for at least a few years.

When it comes to location, the Blue Jays can’t get much better than where they are at 1 Blue Jays Way, next to the CN Tower and steps from Lake Ontario. If the club needed to pick an ideal place to build a ballpark today, it would be on the existing Rogers Centre site.

The club made do at Sahlen Field in Buffalo, but even with the upgrades to the Blue Jays’ triple-A affiliate ballpark, that stadium isn’t built to house 81 Major League baseball games for at least a few years.

And the same goes for TD Ballpark in Dunedin, where the Blue Jays made do for the first two months of their 2021 schedule, but again, that ballpark is meant to house Spring Training games, not a full-on regular season schedule.

Blue Jays president Mark Shapiro has hinted about a large-scale facelift for the Rogers Centre for several years, but due to the pandemic, that project was likely put on the back burner.

“The biggest capital project that’s left for the Blue Jays to consider is how do we either address Rogers Centre through a significant renovation or a new stadium at some point,” Shapiro said during his end-of-season press conference back in October.

“That’s not immediate, but it’s one, when you think about the long-term horizon for the Blue Jays, we’re going to need to address at some point.”

In the interim, the Blue Jays are replacing their scoreboard at Rogers Centre, which will be the new big-ticket item to unveil ahead of the 2022 campaign. In addition, the club will look to improve the concourse with some smaller scale upgrades for next season.

The most recent upgrade to Rogers Centre heading into the 2021 season was a brand new sound system, which hadn’t been replaced since the stadium first opened in 1989. Over the last few years, there have been some cosmetic improvements around the stadium, but nothing as large-scale as the proposed upgrades on the horizon.

Over the last few years, the Blue Jays also upgraded to a new artificial turf, and they installed an all-dirt infield back in 2016. The ideal solution is to install a real grass playing surface, but that’s about as good as a playing surface retrofit is going to get at Rogers Centre.

The Blue Jays played their entire 2020 season on the road in Buffalo, then packed their bags and set up shop at TD Ballpark for the first two months of the 2021 regular season, before finally returning home to Rogers Centre at the end of July.

At the time of its unveiling in June 1989, the Rogers Centre (formerly SkyDome) was a modern marvel, featuring the largest Jumbotron in the world, a retractable roof, the SkyDome hotel, and concessions spearheaded by the second largest McDonald’s in the world.

As a multi-purpose stadium, at one point the Rogers Centre was home to the Blue Jays, Toronto Raptors, and the Toronto Argonauts. There are still remnants of the multi-sport aspect of the stadium (you can still find the SkyDome logo in some of the upper level seats).

Certainly a lot has changed in the 32 years since, as SkyDome was one of the last multi-purpose stadiums of its era, as Camden Yards in Baltimore ushered in the retro-inspired era of stadiums with its unveiling in 1992.

The latest monolith of a ballpark opened earlier this year when the Texas Rangers settled into their new home at Globe Life Field in Arlington. The property includes a shopping mall, a hotel, and several restaurants.

If given the option, one can see why the Blue Jays would prefer to go the route of the Rangers and redevelop the existing land and start from scratch, but if anything can be gleaned over the last few years, it’s that there’s nothing quite like playing at home, even if the stadium itself is the age of a millennial.