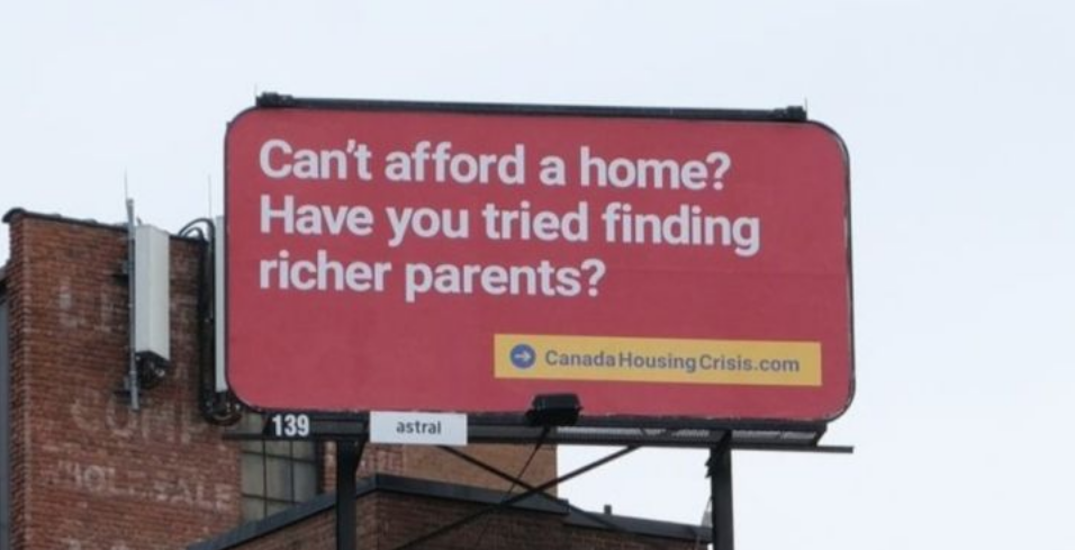 A group of Canadians fed up with the unaffordability of homes across the country are using a tongue-in-cheek Toronto billboard to draw attention to the issue.

The group, called Canada Housing Crisis, sprung from a Reddit forum that started in March of this year.

“We started talking about getting off the internet and bringing the message into the real world,” a representative from Canada Housing Crisis, who wished to remain anonymous, told Daily Hive. “People had a bunch of different ideas and a few mentioned billboards. It seemed like the right mix of publicity stunt and actual messaging.”

The Toronto billboard, located near Queen and Spadina, cheekily reads “Can’t find a home? Have you tried finding richer parents?”

The group also put up a similar billboard in Ottawa that reads “Houses aren’t for you. They’re for the rich. You can go rent.” Both will stay up for one month.

The group hopes that the billboards will let anyone who is frustrated with the housing market know that there is a group out there trying to work on the issue.

“You can feel so isolated and alone when you’re a renter or saver or you’re in the market and decent housing is just unreachable for you,” the Canada Housing Crisis rep said.

“People like us are powerless because we’re totally isolated and have no real representation, while everyone else has good representation. Like realtors have realtor associations, banks and politicians have huge platforms, homeowners have NIMBY groups and homeowner associations.”

They also hope that it will catch the attention of those in charge who, up until this point, they feel have done nothing to help.

“Basically no politicians at any level of government care about this,” the rep said. “They’re not talking about it. The Bank of Canada couldn’t shrug harder if they tried.”

And it appears their work is paying off. Since putting up the billboard, Canada Housing Crisis received around 5,000 new followers in one day and made it to the front of a popular Reddit page. They now have over 11,000 members on Reddit and nearly 3,000 Twitter followers.

Crowdsourcing has been an essential part of Canada Housing Crisis, with funding for the billboard, and even the messaging itself, having been crowdsourced. The group raised $10,000 through a GoFundMe page which covered the cost of the billboards and then some.

What will be done with the leftover money has not yet been determined.

“I think we’d have the most impact by sharing more of our real stories of what we’re going through,” the rep said. “So I think we will try to share more of our stories, perhaps contrasting them against what investors are saying right now.”