Toronto won’t be getting much of a break when it comes to the weather this week, as old man winter is expected to deliver an abrupt dose of 10 cm of snow in the coming days.

Following Monday’s bone-chilling winds, The Weather Network is forecasting up to 10 cm of snow for Toronto on Wednesday, February 27.

Accompanying the snow will be rather chilly temperatures, with -6°C on the forecast for the afternoon, which will feel more like -14°C with the windchill. 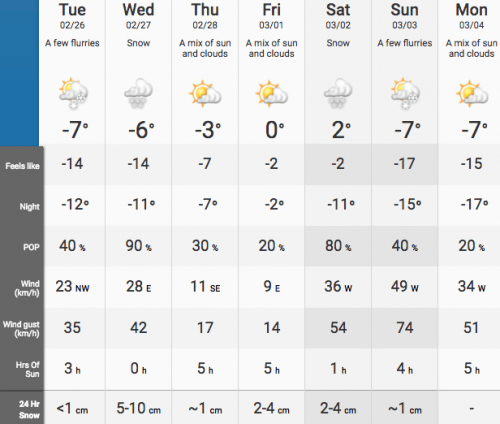 However, the snow will be rather short-lived as it will be followed by periods of sunshine on Thursday leading up to the weekend.

But don’t worry, with only 23 days left of winter, warmer spring weather is thankfully on the horizon.

According to The Weather Network’s long-term spring weather forecast, early March will feel more like January (aka COLD) in Toronto, but a pattern reversal is expected mid-March with an extended period of warmer spring weather.