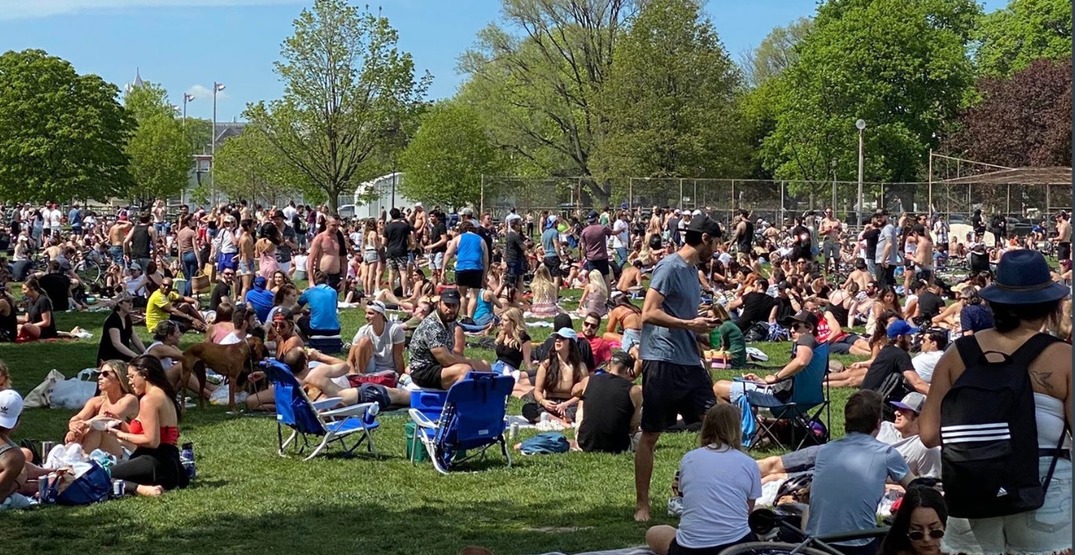 Toronto police issued a total of 23 tickets over the weekend when “thousands” of residents gathered at Trinity Bellwoods Park to enjoy the warm weather.

On May 23, police officers and City by-law officers were at Trinity Bellwoods, engaging with the public, Toronto police spokesperson Meaghan Gray told Daily Hive on Monday.

“A number of cautions were issued and eight tickets for Encumbering or Fouling a Street were written.”

This is a by-law offence for public urination and/or defecation, Gray confirmed.

According to the City of Toronto, officers issued 14 tickets in city parks on Saturday, for a total of 90 parks tickets issued so far in May.

Officers have also spoken to or cautioned more than 5,000 people – including more than 370 people Saturday, the City said.

But due to the large crowds seen on Saturday, additional resources were assigned to Trinity Bellwoods on Sunday.

Officers were at the park at 7 am, with additional cautions issued.

“Six tickets for Trespass to Property, and nine tickets under the Liquor Licence Act were written,” Gray said.

Going forward, the public can expect officers patrolling Trinity Bellwoods with City by-law officers. They will be ensuring compliance through education and awareness as a preferred method of engagement, but enforcement will take place “if necessary.”

“The public is reminded that, even though some restrictions may have been lifted, social distancing orders and by-laws still apply.”

Specifically, this means all organized public events and social gatherings of more than five people who are not members of the same household are prohibited.

Also, remaining closer than two metres to any other person who is not a member of the same household while in a park or city square is still prohibited, with fines up to $1,000 still in effect.

“The public is also reminded that tickets can be issued for those who consume or have open alcohol in a public space,” Gray added.

These fines are $100 and will be a part of enforcement in “problematic parks,” the city added.

On Saturday, thousands of Toronto residents gathered in Trinity Bellwoods Park, where Mayor John Tory was also seen not physically distancing and speaking to others with his face mask not properly on.

During a press conference on Monday, Premier Doug Ford asked for those who went to the park to all get tested for the virus.

“Do us all a favour and get tested now,” the premier said.