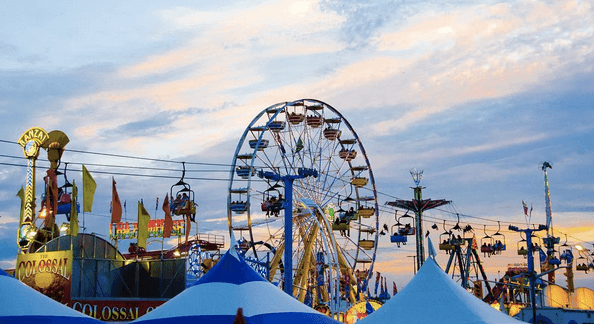 It’s Labour Day weekend (already!), which means our summer sixteen is winding down. Luckily the forecast calls for sunny skies with drinks on patios. And what’s a long weekend in Toronto without a list of awesome things to check out?

Enjoy your Labour Day weekend and check out these events and festivals all around Toronto this weekend!

The Toronto International BuskerFest for Epilepsy Awareness is hitting the beach this year. Besides a new location and dates, there will be no advance schedules, and the events will be spontaneous throughout each day.

Where: Woodbine Park, Cowell Ave at Lakeshore Boulevard
When: September 2 to 5

Fan Expo Canada is in its 22nd year, and is the largest comics, sci-fi, horror, anime and gaming event in Canada. The 4-day event started on September 1 and continues this weekend. Of course, Cosplay is optional.

Where: Metro Toronto Convention Centre
When: On now until September 4

The St Royals Live on the Patio

In case you missed them yesterday, you can still enjoy the live sounds of motown and soul tonight for free at Roy Thomson Hall Patio with the sounds of the St Royals.

Get ready for some barbecue, more barbecue and lots of events at this year’s Downsview Park Ribfest. The park will be filled with food, live entertainment, and kids activities.

Where: Downsview Park, 35 Carl Hall Road
When: September 2 to 5

Artfest At The Distillery

Celebrate the Filipino-Canadian community’s contributions to our city at the annual Mabuhay Philippines Festival. This weekend celebrates food, music, and other staples of the Filipino culture.

If you haven’t checked it out yet, there’s still time to go to the Waterfront Artisan Market. Bringing together a mix of crafters, artisans, chefs, and bakers, this will also take place over thanksgiving weekend.

The Toronto Salsa Practice is a relaxed, friendly gathering of salsa enthusiasts. Lean new moves, and meet other dancers. No partners required.

Get your laughs on this weekend with Moroccan stand-up comedian Gad Elmaleh and his show “Oh My Gad.”

Where: The Danforth Music Hall, 147 Danforth Avenue
When: September 3 at 7 pm

Canadian rockers The Trews are making it sweeter to check out the CNE this weekend – the last weekend of the CNE! The band are playing in the concert series with the Lazys on Saturday. Free with admission.

Where: Harbourfront Centre
When: September 3 to 5

Legendary producer and Black Hole Recordings founder, Tiesto makes his way back to Toronto. And what better way to say bye to summer than dancing to Tiesto under the sunshine?

Where:  Cabana Pool Bar, 11 Polson Street
When: September 4 at 1 pm

Celebrate the end of summer with the Toronto Rhythm Tribe. The Trinity Bellwoods Drum Circle comes to a close this weekend, so end it with a bang and some dancing.

Where: Yonge-Dundas Square
When: September 4

Another reason to get to Wonderland this weekend? Fireworks. That’s right. The annual Labour Day Fireworks display goes off with a bang again this year, taking place over Wonder Mountain. Free with admission.

Keeping with tradition, the annual Labour Day Parade is set to take place on Monday!  The parade travels along Queen Street from University Avenue, and parade participants enter the CNE at approximately 11 am.

Enjoy live music and delicious eats from 18 local food vendors as you say goodbye to summer 2016 with a free outdoor concert at Toronto’s #UnionSummer Festival for a free closing day concert.

Where: Union Station’s TD Summer Stage
When: September 5 at 12 pm

Cruise the Waterfront during the Canadian International Air Show

Boasting the most picturesque patio in the city, Mariposa Cruises’ labour day cruise offers the best views of Toronto’s air show for one last getaway this summer!

If not from the boat, catch it from land. Presented by the CNE, the Canadian International Air Show is the largest and longest running aviation display in North America.

Where: Off the Canadian National Exhibition grounds over Lake Ontario
When: September 3 to 5