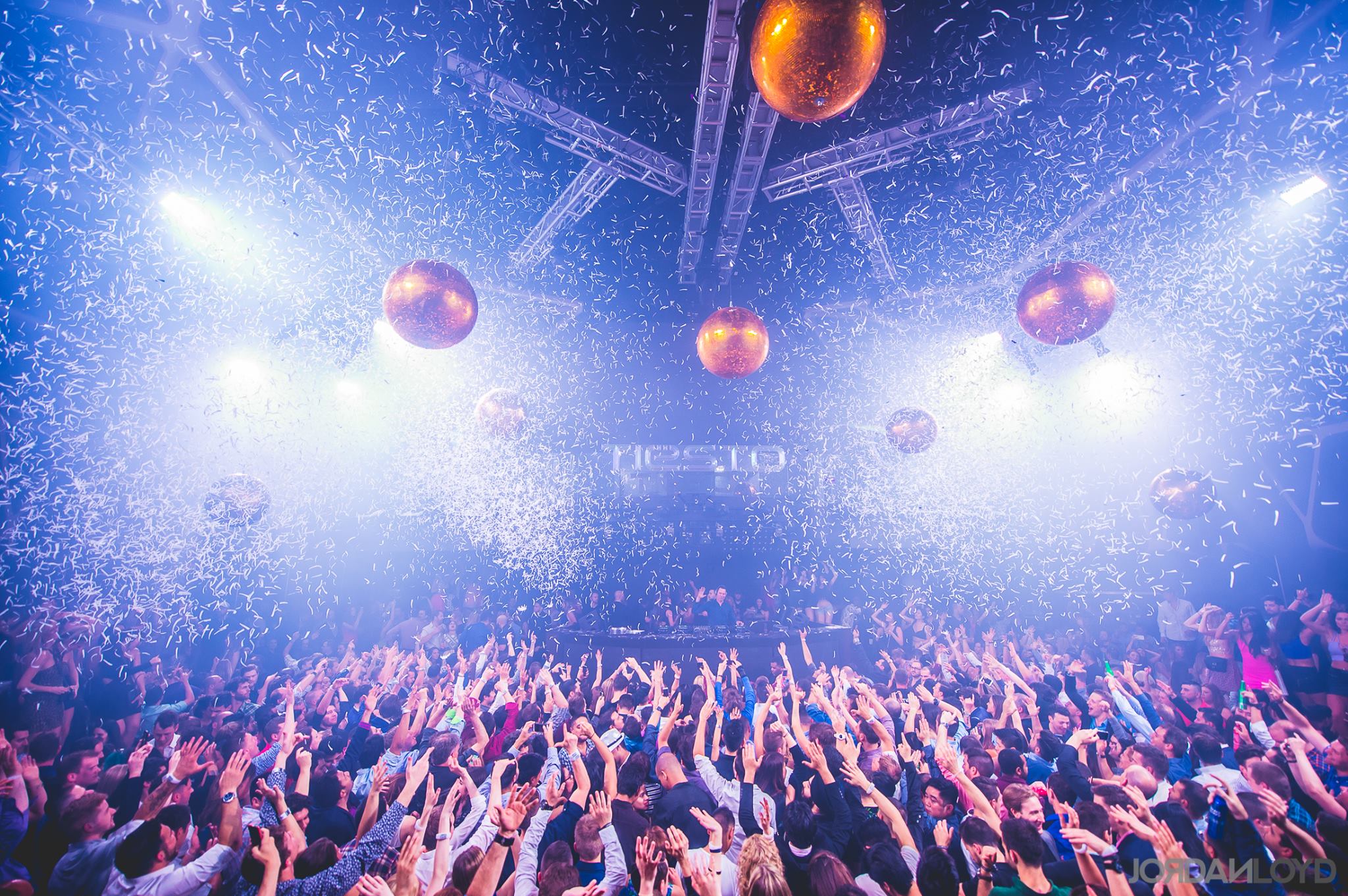 September may feel like the end of summer, but concert season remains hot in Toronto.

From new rap to old school rock, Toronto’s list of concerts this month includes something for everyone. There are still quite a few outdoor shows, so take advantage of the warmth while you can and enjoy some music under the stars.

You might remember Coleman Hell’s “2 Heads” as one of the songs of the year. His nearly three time Platinum hit has been streamed over 100 million times, and his latest single “Fireproof” is fast becoming a hit too. In anticipation for his new album, he is on tour at the CNE this month with Ria Mae.

When: September 1 at 7:30 pm
Where:  CNE Bandshell, 210 Princes’ Blvd
Tickets: Free with Admission

Legendary producer and Black Hole Recordings founder, Tiesto makes his way back to Toronto. And what better way to say bye to summer than dancing to Tiesto under the sunshine?

When we heard it, we didn’t believe it. But here it is. The Bad Boy Family Reunion tour is here this month and features Puff Daddy, Lil Kim, Mase, Faith Evans, 112, Total, Carl Thomas, and French Montana. This is definitely a historical tour for the Bad Boy family.

American rockers The Used are back on the road. The band, which formed in 2001, have had six studio albums, with the last one being 2014’s Imaginary Enemy. They are on tour celebrating their 15th anniversary.

When: September 9 at 7 pm
Where:  The Danforth Music Hall, 147 Danforth Avenue
Tickets: Available online from $32.50.

One of the most soulful voices is in Toronto this month. Hailing from Washington, D.C, Gallant has emerged as one of the best new artists last year with his huge single “Weight in Gold.” His shows have been selling out across North America, and this one is no exception.

When: September 9 at 8 pm
Where:  Mod Club Theatre, 722 College Street
Tickets: Sold out in advance. But limited tickets may be available at the door so get there early.

Indie-rockers Hollerado are pulling up to Indie88’s 3rd birthday bash, along with our beloved Tokyo Police Club and Repartee. A big celebration of local music all around.

When: September 10 at 7 pm
Where: The Phoenix Concert Theatre, 410 Sherbourne Street
Tickets: Sold-out in advance, but some available through resale.

Former Rilo Kiley member, Jenny Lewis returns to rock the city. The singer-songwriter is on a 10-date tour in celebration of the ten year anniversary of her solo debut Rabbi Fur Coat. Catch her at the beautiful Massey Hall.

Michigan folk singer-songwriter Rodriguez comes to Toronto playing an all-ages show this month. You might remember Rodriguez from the film Searching for Sugar Man. He’s Sugar Man. The self-taught guitarist who did not gain popularity until years after he began playing.

When: September 11 at 8 pm
Where: Massey Hall, 178 Victoria Street
Tickets: Available online from $70.

Get ready to headbang. American metal band Slayer, which formed in 1981, has released 12 albums and last year they released Repentless. They are currently touring the album, and are making 90’s dreams come true.

Singer-songwriter and Rock & Roll Hall of Fame Inductee Yusuf/Cat Stevens has announced a fall tour that starts right here in Toronto on September 12. A Cat’s Attic will feature a limited run of stripped-down, introspective performances coinciding with the 50th anniversary of his 1966 single, “I Love My Dog.”

When: September 12 at 8 pm
Where: Sony Centre for The Performing Arts, 1 Front Street East
Tickets: Available online from $83.39.

Toronto’s own Serena Ryder is a musician influenced by many genres and her sound reflects it. The multiple Award-winning artist will be playing in Toronto this month with Juno-award winning The Strumbrellas as part of Virgin Radio’s Summer Wrap party.

English rockers Echo & The Bunnymen have been around since 1978. The Liverpool natives originally split back in ’88, but got back together later in the 90’s. Their latest release was 2014’s Meteorites.

When: September 13 at 8 pm
Where: The Phoenix Concert Theatre, 410 Sherbourne Street
Tickets: Available online from $42.

A man who needs no introduction, Steven Tyler’s Out on a Limb tour stops through later this month. The Aerosmith front man’s music history would take a few articles to cover, but for now, he recently released his first country solo album and is bringing the new sound to the Sony Centre.

When: September 13 at 8 pm
Where: Sony Centre for the Performing Arts, 1 Front Street East
Tickets: Available online from $63.34

Saskatoon rockers The Sheepdogs are kicking it at Lee’s Palace this month touring their 2015 release Future Nostalgia. The lead single from the new album, “Downtown”, was the #1 most added track and also a Top 5 hit at Canadian rock radio for 10 weeks – and now you can see it live.

The legendary queen of R&B, Ms. Lauryn Hill returns to Toronto in September for two shows. Best known for being a member of iconic group the Fugees, Ms. Hill recently produced and recorder six tracks for the 2015 release Nina Revisited: A Tribute to Nina Simone.

Swedish rockers Millencolin are back! The band formed back in 1992, and in 2015 they released their latest album True Brew. Expect a mix of the old and new when they stop into the Pheonix later this month.

An incredible line up of talent at the Toronto Urban Roots Fest (TURF) with Jimmy Eat World, Death Cab for Cutie, James Bay, Barenaked Ladies and so much more. The 3-day festival includes fest passes or individual day tickets.

When: September 16 – 18
Where: Fort York Garrison Common, 100 Garrison Road
Tickets: Available online from $90 for a one day pass.

Back in the city after his recent show in July, the extremely talented Anderson .Paak is in Toronto this month with Kaytranada for The Manifesto Festival. The California rapper/producer has been on a string of sold-out shows, so definitely do not miss this one!

Florida-born rapper Denzel Curry may be young (he’s 21) but his hustle is real. His second album Imperial has been wildly praised, and has guest appearances by Joey Badass and Rick Ross. See him live at Adelaide Hall on the 20th.

Young the Giant captured everyone’s attention in 2010 with their singles “My Body” and “Cough Syrup.” Fast Forward five years and three albums, the boys are back in town touring Home of the Strange.

East London singer-songwriter Blood Orange creates music with multiple layers and melodies. His latest record Freetown Sound is a 17-track masterpiece, and this show is sold out for that reason – definitely try to catch him soon.

When: September 21 at 7 pm
Where: The Danforth Music Hall, 147 Danforth Avenue
Tickets: Sold out.

Chance is back! Following the release of Coloring Book mixtape back in May (which features guest appearances from Kanye West, Justin Bieber, and Future), the Chicago-based Rapper is on the road for the Magnificent Coloring World Tour. His first show is sold-out but tickets are still available for day 2.

One of the biggest reggae musicians in the world is coming to Toronto. Ziggy Marley, son of famed reggae artist and international icon Bob Marley, is bringing his signature sound as part of a mega-tour across the US and Canada.

When: September 28 at 7 pm
Where: The Danforth Music Hall, 147 Danforth Avenue
Tickets: Available online from $35.50.

How to Dress Well

Tom Krell is the talented songwriter behind his solo project, How to Dress Well. In 2014, How to Dress Well’s single “Repeat Pleasure” was on repeat on many music blogs. Since then, he’s been on the road and has released his latest single “Lost Youth / Lost You” in anticipation for his new album.

Everyone had that one friend who played the Temper Trap’s single “Sweet Disposition” on repeat throughout 2009/10. The Aussie band released their latest album Thick as Thieves earlier this summer, and are now on a North American tour.

When: September 30 at 8 pm
Where: The Phoenix Concert Theatre, 410 Sherbourne Street
Tickets: Available online at $32.50.

Electronic dance music sister duo Krewella are in town for their Sweatbox Tour. Although the main show at Horseshoe Tavern is sold out, they will be playing an after party and those tickets are available!