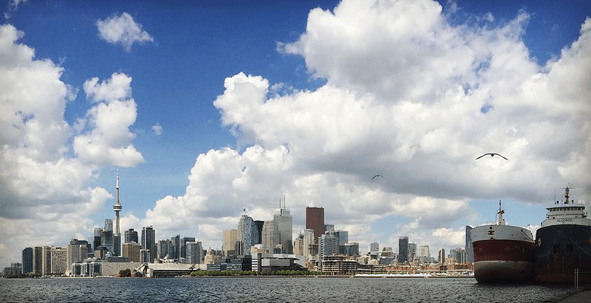 The sun is shining, and we’re ready to take it all in. As always, the city is full of awesome events. From TIFF to Manifesto Festival, check out what’s going on in the city this fine September weekend!

Discover international cuisines, continuous live entertainment and fresh food at Taste of the Kingsway! This annual festival is a renowned culinary and entertainment experience.

Where: Bloor Street West, from Prince Edward Drive to Montgomery Road
When: September 9 – 11

Where: Harbourfront Centre, 235 Queens Quay West
When: September 9 to 11

American rockers The Used are back on the road. The band, which formed in 2001, have had six studio albums, with the last one being 2014’s Imaginary Enemy. They are on tour celebrating their 15th anniversary.

Where:  The Danforth Music Hall, 147 Danforth Avenue
When: September 9 at 7 pm

Where: At the intersection of King and John
When: September 10

Pack a picnic, slather on some sunscreen and head downtown to witness 10,000 Canadians race across Lake Ontario at this free event that supports the Canadian Breast Cancer Foundation.

Grab your bike and put on your dancing shoes and make your way to the Toronto Bicycle Music Festival, which is a yearly series of free outdoor pedal-powered concerts taking place in, and between, our city’s great community parks and streets.

Where: Along the Lower Don Trail from Evergreen Brickworks to Prairie Drive Park
When: September 10, 11 am to 6 pm

Come celebrate Cabbagetown’s 40th birthday and enjoy plenty of local food and entertainment, which includes everything from jazz to Latin to big band to rock.

Where: Cabbagetown (Parliament Street from Wellesley south to Gerrard, and Carlton Street from Berkeley to Parliament)
When: September 10 & 11

One of the biggest festivals of the year takes place this month, and there is nothing like it. Make sure to check out at least some of the Toronto International Film Festival – if not for the movies, at least for those stars.

Where: Various venues
When: On now until Sep 18

Boats and booze are always a great mix for summer days. Keep summer going in September at the Toronto Craft Brew Cruise. Two sailings available, at 2 pm and 7 pm.

Where: 333 Lakeshore Boulevard
When: September 10

Indie-rockers Hollerado are pulling up to Indie88’s 3rd birthday bash, along with our beloved Tokyo Police Club and Repartee. A big celebration of local music all around.

Where: The Phoenix Concert Theatre, 410 Sherbourne Street
When: September 10 at 7 pm

Former Rilo Kiley member, Jenny Lewis returns to rock the city. The singer-songwriter is on a 10-date tour in celebration of the ten year anniversary of her solo debut Rabbi Fur Coat. Catch her at the beautiful Massey Hall.

Can’t afford to go to TIFF? Well, just head to the subway instead. TUFF, as it’s affectionately known, is North America’s largest subway film festival. The event reaches over 1 million commuters daily with the short films it shows on subway platform screens. All you have to do is purchase a token!

Where: Your local subway
When: September 10 to 18

Manifesto Festival puts local artists on the map and unites, inspires and empowers young people through arts & culture. From concerts to artist showcases, the event runs until the 18th and features Anderson .Paak and Kaytranada for one night!

Where: Various venues
When: September 10 to 18

Check out, or be part of, the 7th Annual B&O Yorkville Run! The 5 k race unites local runners and businesses to raise funds for local charities.