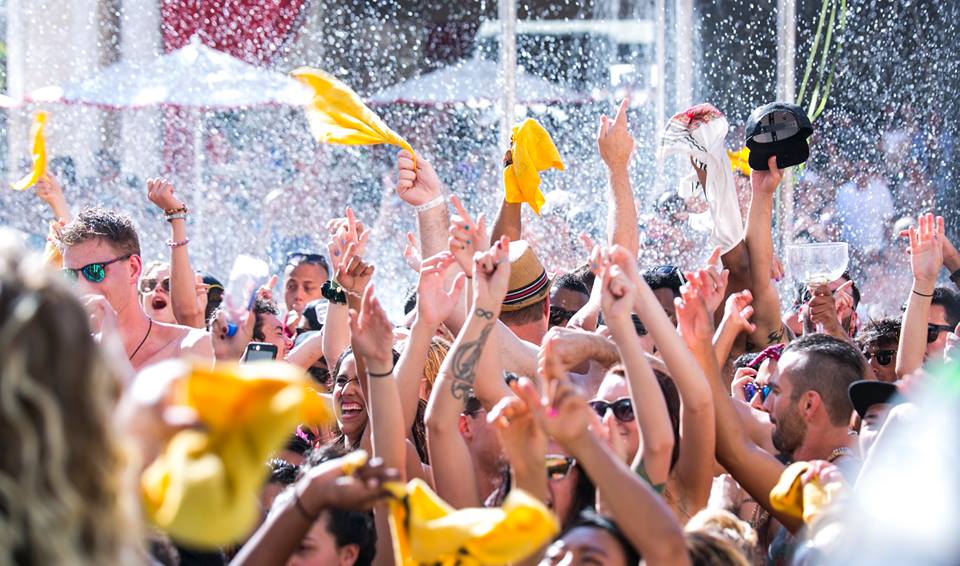 As the summer weather continues, there are awesome outdoor events to head to all weekend long. From concerts to festivals, check out some of the events going on in and around Toronto this weekend.

Taking place this weekend, the two-sided floating movie experience is a must see for Torontonians, on land or at sea! This is the only outdoor theatre that caters to boaters and leg commuters alike. And yes, it’s totally free.

No summer is complete without at least two flower crowns at the Mad Decent Block Party. Diplo’s annual summerjam heats up the city with Vancouver’s beloved Sleepy Tom, Marshmello, Louis the Child, and Grandtheft. Of course Diplo, too. This is an 18+ event, and we were just kidding about the two flower crowns. One will do tonight.

Curated by Wavelength Music, the festival showcases collaboration between the independent music and arts scenes. The very grassroots collective usually organizes about 20 events per year, including Camp Wavelength. Taking place on Toronto Island, this is a good ol’fashion camping weekend among great music and art installations.

Things are heating up at Harbourfront Centre for the annual Hot & Spicy Food Festival. Dance to the hot sounds and savour the spicy cuisine from the mighty Lower Mississippi River to the Gulf of Mexico, with exciting musical performances and a mouth-watering barbecue – southern-style.

The Ex is back! Get to the first weekend of this summer tradition and check out the music, the rides, and of course, the crazy food!

The Chippendales touring show lands in Toronto this weekend with its all-male dancers and their exotic, flirtatious ways! This is the only Canadian date, so catch ’em with their pants down tonight!

Where: The Danforth Music Hall, 147 Danforth Avenue
When: August 19 at 7 pm

The Massey Hall Band is a 15-piece alternative big-band, and tonight as part of the 50th anniversary of the Beatles’ last show in Toronto, the band will be playing the Fab Four’s biggest hits. And it’s free!

Where: Yonge-Dundas Square
When: August 19 at 8 pm

The 5th annual Scarborough Afro-Carib Fest returns to the Scarborough Civic Center with live music, art displays, and tasty eats. Taking place all weekend, and this outdoor event is free and family-friendly.

Rastafest is a multi-disciplined festival showcasing different aspects of the Rastafarian lifestyle and culture. From music and dance to drumming and poetry, this weekend’s events are both entertaining as well as educational.

The long-running Art of the Danforth is back and is taking over the Danforth and Woodbine area. This is one community arts festival that should not be missed.

Where: Along the Danforth between Woodbine and Greenwood
When: August 20 – 28

Watch the migration of Monarch Butterflies before they head on their 3,500 km journey to Mexico. This is a free event that includes guided hikes, kids activities, and bird banding demos.

Terror Squad’s Fat Joe returns to Toronto for a day time par-tay at Cabana. Catch the American rapper and get ready to ‘lean back.’

As the final Tragically Hip tour comes to an end, there are several venues playing the final show on big screens – including the Horseshoe Tavern. For another – and much larger – experience, check out the show at the CNE.

Where: The Horseshoe Tavern, 370 Queen Street West
When: August 20 at 7 pm

For once day in downtown Toronto, experience the streets like never before – with no cars in sight. Open Streets TO promotes physical activity and exploring our city in a healthy, fun way. The event centres around Bloor Street (from Dufferin to Parliament) and Yonge Street (From Bloor to Queen).

After a rocky start to 2015, with long-time Blink 182 member Tom DeLonge leaving the band, Travis Barker and Matt Hoppus began performing with Matt Skiba. Skiba fit right in with the Blink’ers and the trio released their album California this year. Catch the new line up this weekend!

Where: Molson Canadian Amphitheatre, 909 Lakeshore Blvd.
When: August 21 at 7 pm

Vine-star and Canadian singer/songwriter Shawn Mendes has been a global success since he first began his music career in 2013. His album Handwritten got on top charts globally thanks to his hit single, “Stitches.” Teen pop fans’ dream, Mendes will definitely have some girls screaming at the ACC.

End your weekend with a little movie in Christie Pits. This weekend’s showing is Cast Away- because Tom Hanks and Wilson make park movies that much sweeter. Don’t forget your blankets and keep and eye out on the weather.