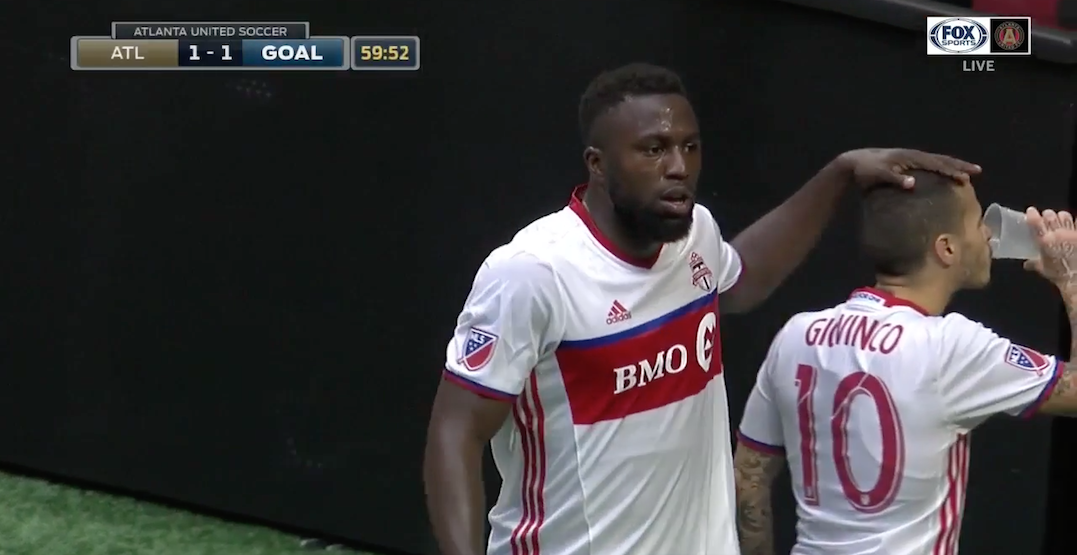 While it comes as no surprise that TFC fans have been celebrating the team’s victorious season, it turns out the players are also joining in on the celebrations.

During Sunday’s regular-season finale against Atlanta United FC, forward Jozy Altidore scored the TFC’s first goal of the match to bring the game to a 1-1 tie.

In response, an Atlanta fan tossed a cup of beer at him — which the player tried to head and missed. Sebastian Giovinco, however, obviously didn’t want to let the beer (or the rude gesture) to go unnoticed, so he bent down to pick up the beer and polished it off himself before tossing it back into the crowd.

That's that down south hospitality we've heard so much about. Cheers, ATL! 🍻#TFCLive | #ATLvTOR pic.twitter.com/i6YT5Lv0d1

TFC took to Twitter to share the hilarious moment and tweeted,  “That’s that down south hospitality we’ve heard so much about. Cheers, ATL!”

Jozy Altidore scores, tries to head a beer thrown at him, Giovinco picks up the beer and drinks out of it. Amazing https://t.co/lM8l0sYPJU

Perhaps the chug gave Sebastian Giovinco the liquid courage he needed, as he later tied up the game again with a spectacular free kick, which allowed the game to end in 2-2 draw.

This final point helped Toronto make MLS history by becoming the team with the best ever single-season points total with 69 points.