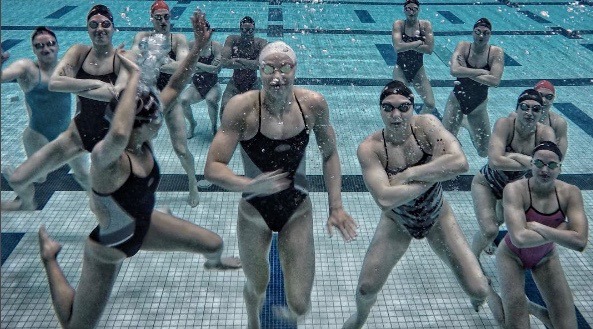 Canadian athletes are currently making their way to Brazil with the dreams of returning home with a gold medal.

This summer, Ontario is the most represented province with 132 athletes competing, followed by British Columbia with 68 and Quebec with 54.

We’ve rounded up the 25 most social media savvy athletes hailing from the Greater Toronto Area that you need to follow and cheer on during the 2016 Summer Games.

Super pumped to be flying to Rio in a few hours but sad to be leaving behind the guy that got me here! Thanks for leading me on my #roadtorio Jo! YOU ARE THE BEST❤️🙏 #grateful

The 26-year-old Toronto native will be competing in the women’s 200m breaststroke competition. This will mark her second Olympic appearance.

Officially a 2x Olympian! Made some mistakes at the trials, but I made it through healthy and I’m ready to train for 3 events at the biggest meet of my life in Rio! Can’t wait to put on my Olympic uniform once again and represent my country 🍁🇨🇦 Thank you to everyone for the support #nikerunning #roadtorio 🇧🇷 #justdoit @wrgmag

Aaron made his Olympic debut at London 2012 where he came within one spot of qualifying for the 200m final. This year, he will be competing in the 100m and 200m sprints as well as the 4x100m relay.

Rebecca is a 20-year-old soccer player hailing from Toronto. After being left out of last summer’s Women’s World Cup squad, she is more than ready to represent her country in Rio this summer.

On the track with JT. Had fun today at TDSB finals with the kids

Andre is a 21-year-old sprinter from Scarborough. He is currently the reigning Pan Am champion in the 100m and 200m sprint.

Rio will be Penny’s first attempt at an Olympic gold medal. The 16-year-old will be competing in the women’s 100m free and 100m butterfly competitions.

Arthur began boxing as 12-years-old and eight years later the Torontonian will be competing at his first Olympic Games in men’s boxing.

Brittany broke into shot put when she was 15-years-old. This spring, Crew, a CIS First Team All-Canadian, became York University’s first back-to-back female athlete of the year award winner in 31 years. This will be the 22-year-old’s first Olympic appearance.

Some guy jumped in the back of my C1! At least he’s in stroke 👍 #wepaddle #icfsprint #Nelo #asics #RoadToRio

Mark is a veteran Team Canada athlete and made his debut at the 2008 Beijing Olympics. Rio will mark his third Olympic appearance and he will be competing in the men’s C-1 1000m.

Had our last “workout of substance” at the track today! The hay, as they say, is in the barn. Excited for trials next week!! #matchymatchy #bringiton #livingthedream

This 20-year-old Toronto native will be representing Canada in the women’s 1500 in Rio this summer.

Happy to get our first win on the dirt #montecarlomasters

Daniel will be replacing Milos Raonic in Rio this year, but this won’t be his first Olympic Games. Rio will mark Nestor’s sixth Olympic appearance, with his first taking place some 20 years ago in the 1996 Atlanta Games.

Thrilled to be a part of the CANFund team! I am so thankful for your generous support on my Road to Rio!!! 🇨🇦 🙏🏻 @canfund

After placing 5th at the 2015 Pan Am Games, Rio will be the 25-year-old Torontonian’s shot at winning a gold medal. Kelsie will be competing in women’s pole vaulting.

The World counts down, 30 days to the Olympics. Don’t get me wrong, I am stoked for the moment where Team Canada comes together, for the chance to share my love for Canada and trampoline with the world but what truly excites me is the next 30 days. For the next 30 days, I get the opportunity to wake up everyday with the sole intention to make myself better. To give everything I have in training and to go to bed each night exhausted from the effort. I’m excited by the day in, day out grind and chance to do what I love, for all the moments you don’t see leading up to that moment I get up, present to the judges and leave it all out there on the field of play. Here’s to the next 30 days. #whatittakes

Rosie is no stranger to the Olympic podium, as she took home a gold medal at the 2012 London Olympics. This year she will not only be competing in women’s trampoline, but she’ll also be leading Team Canada into the Opening Ceremony.

After winning Pan Am gold in pole vaulting on home soil last summer, the 22-year-old is looking to bring home an Olympic gold.

Can officially say I’m an Olympian now! Blessed to have made the 🇨🇦 Team ! Thank you to everyone who has supported me , I am truly grateful. 🙏🏽 #Rio2016 #Olympics #JustTheBeginning

Chanice will be competing in the 400m hurdles and the 4x400m relay this summer and this will mark her first-ever Olympic Games.

It’s been a great week back home catching up with friends and hitting gym but it’s time to get back to a lot more of this. Going to be doing on water training in Toronto for the first time in two years. Let’s get it on!! #Rio2016 #RoadtoRio @teamcanada

Toronto’s Tom Ramshaw will represent Canada in the men’s Finn. The 24-year-old will be making his Olympic debut after transitioning from the Laser class.

Jennifer began rowing in 2007 during her first year at Western University. This will be the 26-year-old’s first Olympic Games and she will be competing in the women’s rowing pair.

Day 7 in #riodejaneiro for #olympics2016 thought I would post for before day’s end and give a shout out to @thebrenthayden, honoured to receive an official invitation to the #olympics from him. . . . . #teamcanada #fhcmnt #redcaribou #athleteslife #fieldhockeyplayer #fieldhockey #Canada #RoadtoRio #olympics #sweetlife #tour #tourlife #rio2016 #sport #kenya #uganda #goa #goan

Devohn first played field hockey when he was 12-years-old. Now at 27, this will be his first Olympic Summer Games.

Being an Olympian is in Kennedy’s blood. As the daughter of two-time Olympic silver medallist Sandy Goss, Rio will mark Kennedy’s Olympic debut and she’ll be competing in the women’s 4x200m freestyle relay.

My 5 week training camp in Hungary is almost up… and I have some folks to thank. @nelokayaks thanks for the boats! @asicscanada thanks for keeping me well clothed & shoed, @mazdacanada thank you for the zoom zoom and for 20 years of support to @canoekayakcan, @oakley cheers for protecting my eyeballs from the sun and for being my longest standing sponsor (17 years!), @nortonrosefulbright thanks for sharing this journey and helping me along the way. Last but certainly not least, @bell_canada thanks for keeping me connected to my friends and family. I’ve spent most of my National Team career on the road, and you’ve made staying in touch with my loved ones back home possible… Beyond that your commitment to mental health thru @bell_letstalk is exemplary and amazing and I’m so proud to stick a BELL on my boat. I love you guys, could never have achieved my goals this year without your support. 🇨🇦❤️🇨🇦 • • Off to Rio soon! All the best to all my friends, teammates and competitors! 🇧🇷🇧🇷🇨🇦🇨🇦

Adam is a Summer Olympics veteran and Rio will be his fourth Olympic appearance. He won his first Olympic gold medal in the 2004 Athens Olympics and has since gone on to win two silver Olympic medals (Beijing 2008 and London 2012) and a bronze (Athens 2004).

thanks for the entertainment and for pushing me in practice over all these years! I’ll miss swimming with you TPIC ❤️ #LastOlympiumPractice #Tokyo

Rio will be this 22-year-old Torontonian’s second Olympic appearance. Brittany competed at the 2012 London Olympics and will be competing in the women’s 200m free, 400m free, 800m free, and 4×200-m free relay.

I’ve been dreaming about this day for as long as I can remember, thank you to everyone who has helped me along the way, my family, friends and teammates I wouldn’t have been able to do this without you #roadtorio #riotrials

Rio will be Javier’s Olympic debut and he will be representing Canada in the men’s 100m back competition.

After helping Team Canada win gold in the 4x100m freestyle relay at the 2015 Pan Am Games, this will be Michelle’s shot at winning an Olympic gold medal. Michelle will be competing in the women’s 50m free competition.

This will mark the 29-year-old Toronto native’s first Olympic appearance. Kristina will be competing for a women’s beach volleyball gold medal.

So your girl will be wearing this outfit again…BUT IN RIO 🎉🎉! I AM GOING TO THE OLYMPICS GUYS! No words can express the gratitude I have for those who have helped me get to this point. It’s been a rough road and I was really hard on myself for it not happening so picture perfect. It’s not always about how you get there, just as long as you do get there! And I could not have gotten here without God, period. The words “olympian” never sounded, felt and looked so good! #rio2016

Training camp in Toronto is over. It was short, but super sweet and memorable! Thanks to @nikebasketball and #CrownLeague for celebrating our team. Much love🍁 #TeesJourney

After finishing 8th at the 2012 London Olympics, this will be Tamara’s big shot of bringing a gold medal back onto Canadian soil.