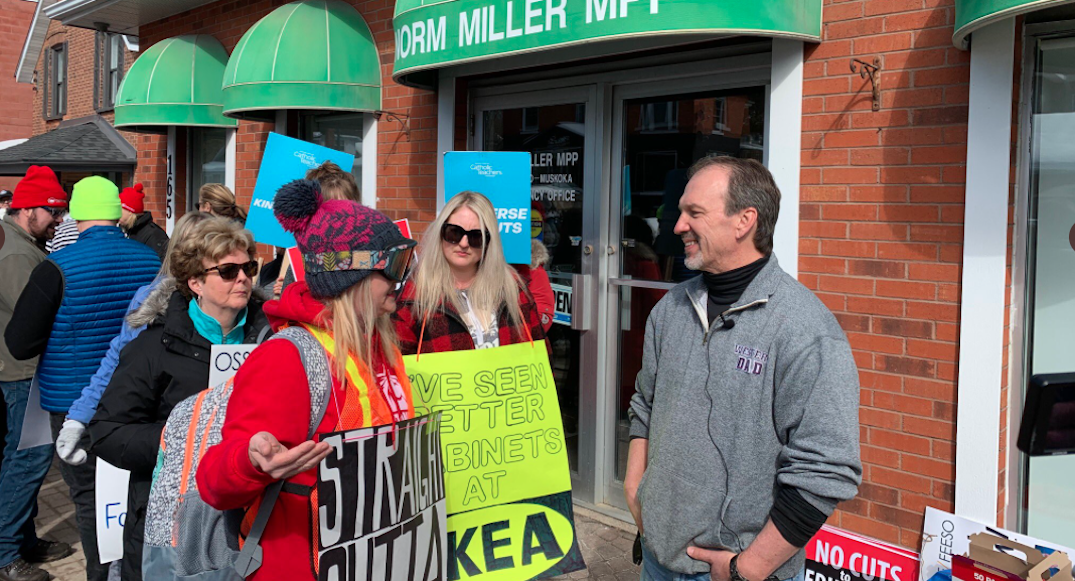 The union representing Ontario high school teachers’ will pause rotating strikes starting the beginning of next week until March 27.

“Our intent has always been to minimize the impact our labour actions have on students,” Harvey Bischof, President of OSSTF said in a statement. “With so many student events planned around and during March Break, we feel that a pause in our strike actions is appropriate at this time.”

The limited withdrawal of services has been in place since November 26.

According to the teacher union, the expanded sanctions will have a minimal impact on the learning environment, while continuing to draw attention to the government’s cuts to education and the lack of progress in bargaining.

The news comes one day after OSSTF and two other teacher unions in Ontario took part in a province-wide strike on Thursday.

Bischof was actively participating in the protests, visiting picket lines in North Bay, Bracebridge and Orillia.

The province-wide strike still took place after the Minister of Education, Stephen Lecce, said the Government of Ontario agreed to certain bargaining points that were important to teachers.

Lecce said the government agreed to keep classroom sizes low with an average of 23 students per class.

However, Bischof believes that the minister’s “vague proposal” to fund classroom sizes averaging 23 students will result in “significant changes for students.”

“We already see overcrowded classrooms and disappearing courses — often courses students need in order to graduate. This proposal does nothing to address those serious problems, all of which have come about thanks to the Ford government’s short-sighted policies,” the OSSTF President said.

Lecce also proposed to partially restore funding for the Local Priorities Fund which provides services for special education, another central issue at the bargaining table for teachers.

The minister said they will create a new fund called, Supports for Student Fund, which would continue at the same funding amount as the existing program.

But Bischof says the partial restoration of the fund will not bring back the hundreds of education worker job cuts already made by the government.

“These workers provided vital support services to high-needs students, supports that many students are missing this year,” he said.

“We urge the Minister of Education to abandon his habitual tactic of bargaining via press conference and direct his negotiating team to return to the table. Parents, students, and educators want the minister to engage in real, good-faith negotiations,” Bischof said. “Bargaining proposals need to be brought to the bargaining table, where they can be meaningfully discussed, not proclaimed from a podium.”