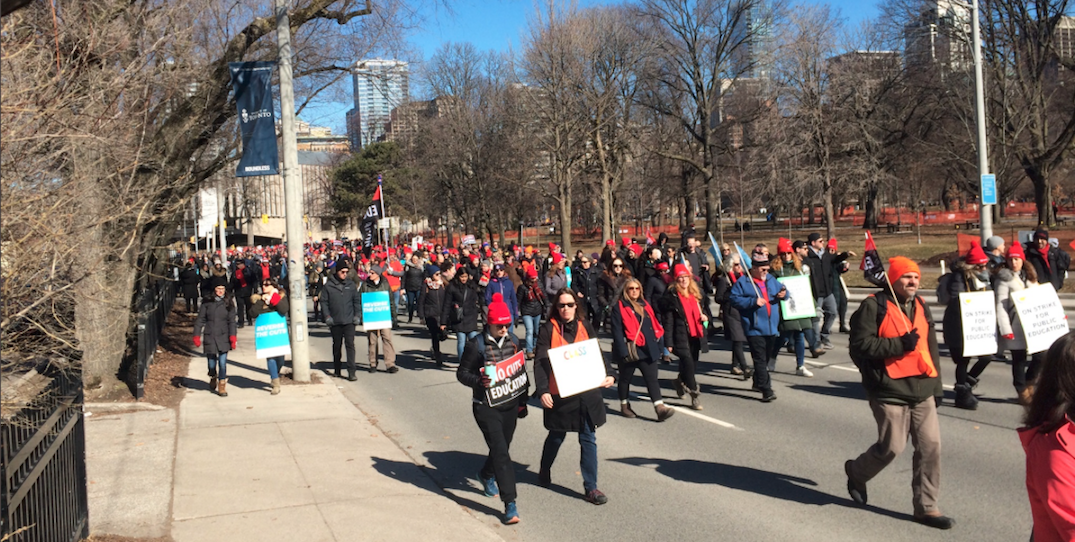 Teachers all over Ontario protested on Thursday in the second province-wide strike to happen in less than a month.

The president of OSSTF, Harvey Bischof, was actively engaged with the protests in North Bay, Bracebridge, and Orillia.

Thousands of teachers also gathered in Queen’s Park, demanding the Government of Ontario and Minister of Education Stephen Lecce properly address their main concerns at the bargaining table.

The Toronto and York Region Labour Council posted a video on social media of a trustee for the Toronto Catholic District School Board, Norm Di Pasquale, chanting along with other protestors saying, “education, no cuts.”

Big turnout today at the #OSSTF #catholicteachers picket at Queen’s Park! Publicly funded education is worth fighting for! On until 1pm, come out and enjoy a beautiful day#topoli #onpoli #onted pic.twitter.com/ASzIatvIrf

Adam Vaughan, an MP for the Spadina – Fort York area also showed his support in Queen’s Park, saying if teachers and students are fighting for quality education they, “have my support.”

“The Ford Govt needs to go get back to the table and show the public a serious and funded commitment to public education,” the MP said in a post to social media.

Teachers and students should be in classrooms … but if the need to fight for quality education and our children’s future they have my support… the Ford Govt needs to go get back to the table and show the public a serious and funded commitment to public education #ontedstrike pic.twitter.com/dLWRHrK9zN

Lecce, meanwhile, is urging them to stop.

“I have offered all teachers’ union federations a fair and reasonable plan, which should pave the way to reaching a good deal that keeps students in class,” he said.

“The time for a deal is now, I urge the unions to stop this disruptive escalation and return to the table to get a deal that is fair for parents, students, and educators.”

The strike comes just two days after Lecce said the provincial government agreed to certain bargaining points that were important for teachers, like keeping classroom size low, continued investment in special education funding, and a 1% enhancement in compensation for teachers.

“The government has consistently made reasonable moves — effectively freezing class room sizes, a parental opt out for online learning, a commitment to full-day kindergarten, and one 100% investment in special education,” Lecce said.

For Sam Hammond, Elementary Teachers’ Federation of Ontario (ETFO) president — the one union not striking — Lecce’s “pronouncements to the media” were outside the collective bargaining process.

“ETFO does not bargain in the media and we have not seen details of the Minister’s proposals at the central bargaining table,” Hammond said in a statement. “We have learned from past experience that Minister Lecce’s public announcements do not necessarily translate into negotiating proposals at the table.”