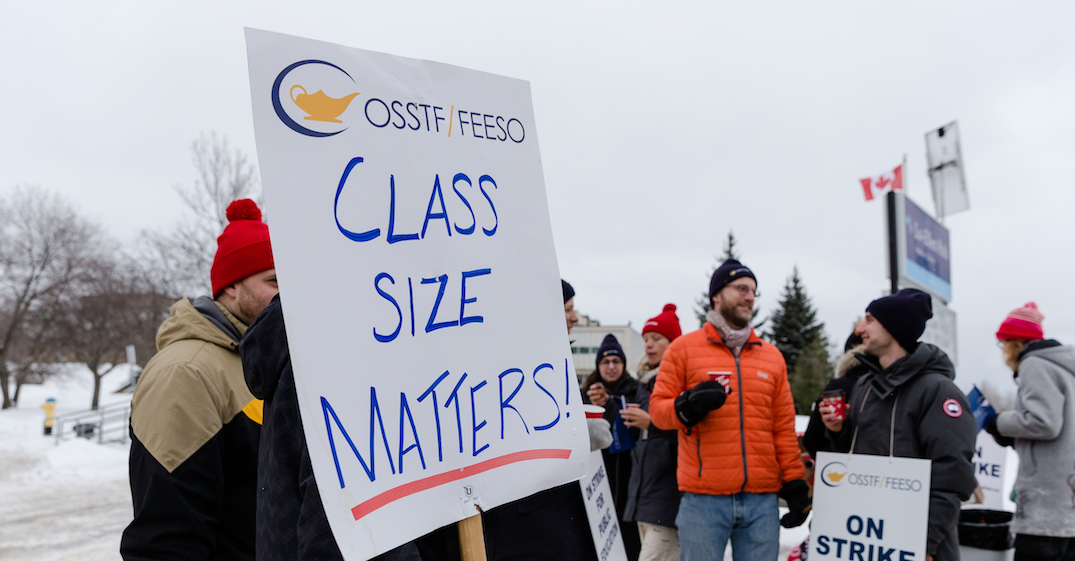 A major Ontario teachers’ union is immediately suspending all strike sanctions indefinitely during the COVID-19 pandemic.

On Wednesday morning, the Ontario Secondary School Teachers’ Federation (OSSTF) said the strike sanctions include part of the limited withdrawal of administrative services that were in place since November 29, 2019.

Media Release – OSSTF/FEESO is immediately suspending all strike sanctions indefinitely. This includes sanctions that were part of a limited withdrawal of administrative services that has been in place since November 26, 2019.#OSSTF #onted #onpoli https://t.co/Ov97pXaqWM pic.twitter.com/J4ctwjwERo

The union already announced that rotating full withdrawals of services would be suspended until March 27, but now that suspension is indefinite.

“Last week, we wrote to the Ministry of Education, and to the associations representing Ontario’s school boards, to offer our full cooperation and support in any efforts that will help to combat the spread of the COVID-19 virus,” Harvey Bischof, president of OSSTF, said in a statement.

“We also advised local OSSTF leaders that we wished to be flexible in the application of administrative sanctions in any circumstances where those sanctions may hinder measures to counter the pandemic.”

Bischof stressed that even with this recent suspension, members of the union will continue to assist school boards and the government in “fighting the spread of COVID-19.”
The OSSTF president also asked Minister of Education, Stephen Lecce, to consult with teachers’ unions before making plans for education systems during the pandemic — on Tuesday, Lecce announced that all standardized testing for Ontario schools has been cancelled.
“At this time, I urge Minister Lecce to consult with OSSTF, the voice of front-line workers, before making or implementing further plans for the education systems in which our members work.”

“At this time, I urge Minister Lecce to consult with OSSTF/FEESO…before making or implementing further plans for the education systems in which our members work.” @HarveyBischof #OSSTF

Since January, the OSSTF, as well as three other major teachers’ unions, have been on strike, as negotiations with the province on certain education cuts have been ongoing.

However, last week the Ontario Catholic School Board reached a tentative agreement with the Ford government.

There has been no announcement yet on whether OSSTF is close to an agreement.

“We are enormously proud of the sustained campaign OSSTF/FEESO members have undertaken over many months to defend publicly-funded education in Ontario. Those efforts have been, indisputably, in the best interests of both our students and the long-term health of public education in Ontario,” Bischof said.
“For the time being, however, we believe it is necessary to turn our full attention to the immediate crisis at hand.”

On March 12, Ontario schools announced their closure for two weeks after March Break, from March 14 to April 5.