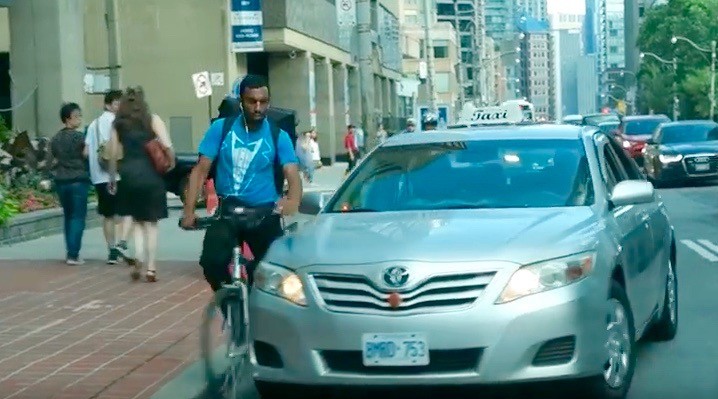 If you’ve ever been on a bike in Toronto this video will terrify you.

It’s stressful enough to keep up with everything that’s happening in a city of 2.5M+ people, to not get doored, to not get hit by a car, other cyclist, or pedestrian, and to arrive safely at your destination.

Which is why it’s no secret that road rage in this city is a very real, and very dangerous, thing in Toronto.

But this taxi driver just took it to a whole other level.

In a video posted to his YouTube account, famous American Vlogger Roman Atwood (8.6M subscribers) was in Toronto last week and happened to catch an insane incident between a cyclist and taxi driver on what appears to be Bay Street in downtown Toronto.

Of course, we can’t see what happens before the cyclist hits the taxi cab’s window, but in the aftermath of the collision eye witnesses seem to suggest that the taxi has been giving the cyclist a hard time for a couple of blocks.

While Roman Atwood is best known for his pranks, we’re sad to say that we don’t believe this is one of them, but rather, just the all too upsetting reality of what our streets have come to.

One thing’s for sure, no matter what transpired between the cyclist and taxi in the moments before this incident occurred, hitting someone with a car is – very obviously – never anything other than the worst thing you can do.

The cyclist involved is delivery runner for food courier Flavour Delivery. When Daily Hive reached out to them they responded with the following statement:

“We are extremely concerned by the incident involving one of our Favour Runners and a motorist in Toronto. The safety of our Runners is a top priority. We are in close contact with the Runner. The police have been informed and are currently investigating the incident.”

Skip to 3:44 in the video below to see the full incident.