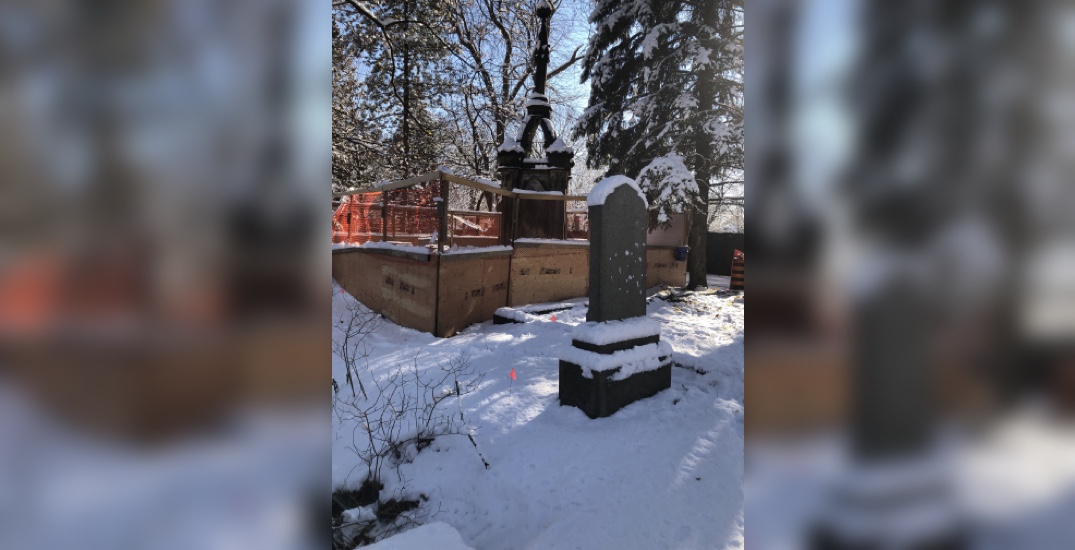 Protection around monument in the work area. (Photo by John O'Brien)

A historic Toronto cemetery has had to disinter hundreds of cremated remains in an effort to stop a portion of the cemetery from eroding.

St. James Cemetery is one of the oldest still-operating cemeteries in Toronto. The historic cemetery is located on Parliament Street, stretching from Wellesley Street up to Bloor Street.

The cemetery opened in 1844, and the owners are working to keep it in good shape. Maintaining the grounds right now means doing extensive work on the area that was seeing erosion.

John O’Brien, who is a consultant on the project and was recently made director of cemetery operations, spoke to Daily Hive about what goes into keeping the historic burial grounds in top shape.

For starters, a lot of money goes into it. The current project to fix the erosion in the cemetery comes with a $2.5 million price tag, according to O’Brien.

“It’s all been funded internally. Through resources of the cathedral and some loans from the Anglican Diocese of Toronto,” he said. “They’ve been very supportive partners for the project.”

It’s more than just the cost of the project. O’Brien said that it’s been a long and complex project since they first noticed that some of the grave stones had shifted due to the erosion.

“Back in the 1960s, they kind of levelled out that area of the slope, and they plotted it for cremation burials,” he said.

Where that ground had been levelled, they saw the initial signs of erosion. Graves closest to the slope had moved ever so slightly.

“That began a consultation process with other consultant experts in the geotechnical field, and that led to a very detailed and technically complex plan to shore up that section of the slope,” O’Brien told Daily Hive.

That portion of the cemetery is about 200 metres in length. It’s also where 500 cremated remains were buried between 1960 and 2010.

“They were identified as needing to be disinterred and stored on a temporary basis until that project is complete,” said O’Brien.

When the reburial process begins, the cremated remains will be placed as close as possible back to their original resting place, he added. To avoid similar issues down the road, they’ve decided to keep the reburials at least three metres from the edge of the slope.

The erosion, said O’Brien, is a natural occurrence, but it’s been helped along by an invasive maple species. Norway Maples, the invasive species, have dense leaves that prevent sunlight from hitting the ground beneath. This can kill off plants beneath the trees.

“A lot of the understory plantings that you would typically find on a slope with their root systems that would also offer stability to the slope were dying out,” he said.

So, how did they get the cremated remains and the urns they rest in out of the ground? Very carefully.

According to O’Brien, cremated remains are typically buried two feet deep, and contractors with expertise in the disinterment area dug each grave by hand. No big machinery was used. Once they came upon the urn in the ground, they worked to remove it.

“They were very, very careful, very meticulous, very methodical uncovering those remains, extracting them, placing them into a small storage container, identified and then moved to a large secure storage facility,” he said.

The process of disinterring the cremated remains took about five weeks and was completed in early September. Now the more complicated work of levelling the ground takes place. It is expected to wrap up in the spring of 2022 when the remains will be reinterred near their original resting place. O’Brien said he expects this will happen in May 2022.

In Ontario, relatives of the deceased must be notified before disinterment. This presented a difficult task for the staff at St. James Cemetery as they knew many of the deceased had purchased their plots long ago.

“The solution was to post signage in the cemetery, we posted two very large signs, obviously put notices on our website and we wrote individually to those families that had an interments in that area in the last 10 years,” O’Brien said.

In the end, he said that many of those letters were returned to sender, but he hopes that by getting the story out there for people to read, any surviving family members will be notified and know that their loved ones’ burial sites are being looked after.

While the work may be complicated, O’Brien is happy to see the St. James Cathedral put the effort in that’s needed to keep it maintained.

“They are making a significant commitment not only to their parishioners who are currently buried in the cemetery, but this property is a significantly historical property in the City of Toronto,” he said.

The work to fix the slope and additional projects in the future aim to bring even more beauty back to the historical Toronto cemetery.

“We’re undertaking that work over the next few years to really restore its appearance and it’s already being used as a place for passive recreation by the local community,” he said.