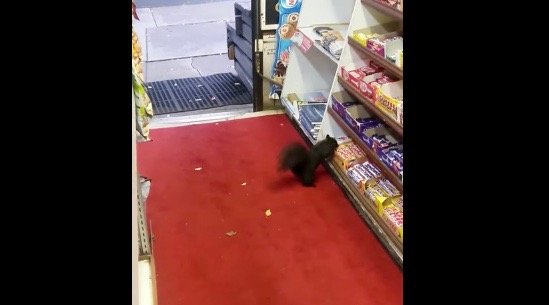 A Toronto convenience store has been struggling with thieves for months now.

And it’s driving them nuts. (Sorry, had to.)

A squirrel, or group of squirrels, has been stealing chocolate bars from the store that’s located near Broadview Station since at least October, when one of the owners took to Reddit for suggestions:

My family owns a convenience store around Broadview Stn-ish.

We tend to leave the door open during the day because it gets stuffy and hot, with all the coolers and fridges going off. We simply can’t afford to close the door and turn on ventilation/cooling to max, with hydro bills being what they are. Having said that, we have been storeowners our whole lives, with 7+ years spent at this particular store, and never had a problem with this routine.

Until the squirrel started showing up.

For around a week or two, a squirrel (either the same one or maybe not) has been coming in when we are not looking, taking a chocolate bar, and dashing off. It’s a different bar each time – O’Henry, Mr. Big, etc. It happens about once every 2-3 days.

It is definitely a squirrel that is doing the stealing. Though we can’t see it the moment it commits the theft (because the bars are displayed below the counter, on the customer’s side), we can hear a distinct rustling. When we come around the counter to try to catch it, we can see the squirrel running off with the bar in its mouth. It’s slower than normal by that point, obviously because it has a huge and heavy chocolate bar in its mouth, but it’s still hard to catch. We tried running after it, but it’s still faster. A couple times, passerbys and customers tried chasing after it with us, but once it goes up a tree, it’s game over.

Do you have any advice/suggestion on how we might deter the squirrel?

We could try closing the door, but then the store will get stuffy, and it just costs too much to cool down the place enough all day every day. We also tried calling animal services (311), but it only seems to be concerned about lost/killed animals/pets. We also can’t use the usual tricks for deterring squirrels. We couldn’t, for instance, sprinkle hot pepper flakes all over the chocolate bars because little kids buy these things and might rub their eyes after (etc.). We also couldn’t set up a barbed wire (like in the case of small openings) because, well, it’s the big front entrance we’re talking about. Please help!

We know, it sounds pretty hilarious and made up. Except there’s video. The first of which was uploaded back in October 2016:

A second video was just uploaded yesterday capturing a possible repeat offender, though it dates itself as November 19, 2016:

The second video is the last update that’s been made to the Reddit thread. Perhaps the squirrels have settled in for the winter and are busy planning their spring attack.

We’ll just have to wait to find out. In the meantime, trust no squirrels.