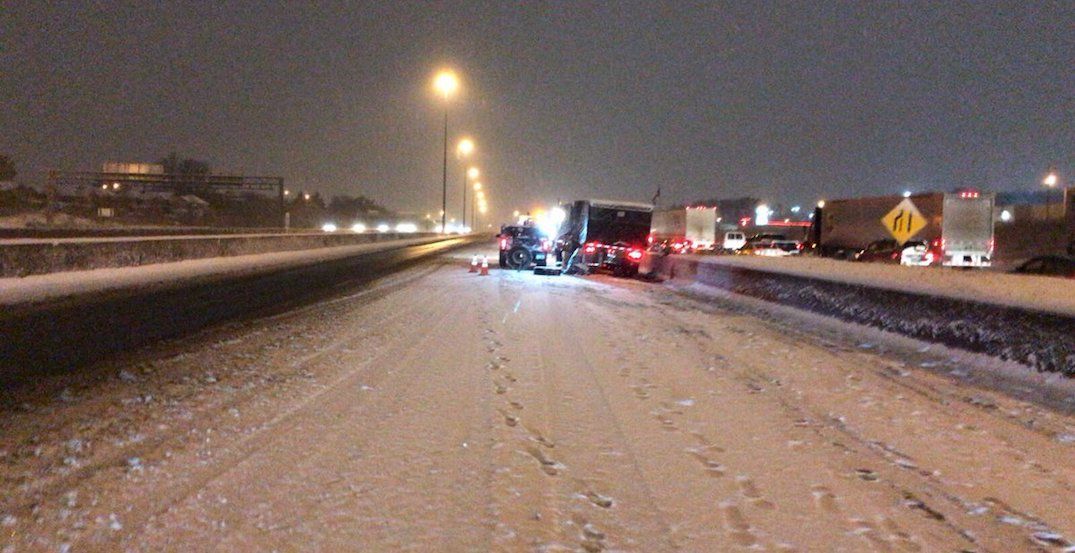 It may be a winter wonderland out there, but it’s certainly not on Toronto’s roads this morning.

Commuters had to deal with the city’s first significant snowfall through rush hour traffic, which was slower than usual on Tuesday morning.

According to OPP Sgt. Kerry Schmidt, parts of Highway 401 were closed to due jack-knifed tractor trailers. Schmidt added that there had been more than 10 jack-knifed trailers overnight.

One of the accidents was at the 401 westbound at Morningside, where express lanes were closed for recovery for a good part of the morning. It was recently cleared, said the OPP.

We are investigating about 3 jack knifed trucks right now. There have been over 10 jack knifes overnight.
Expect a slow #MorningCommute pic.twitter.com/HaTnNVMEMb

Sgt. Schmidt said that traffic is moving slower, and to be sure your vehicle is cleared of ice and snow.

“Always be careful, watch out for vehicles around,” he said. “Please take it easy out there. It’s going to be a messy one.”

Several delays were reported on the TTC throughout the morning, mostly due to the snow.

Delays during weather conditions are related to bunching and moving delays, so unfortunately more buses is not the answer, they’ll just end up following each other around the route. Our fleet is currently at maximum capacity, too. ^RA🚀

A special weather statement issued by Environment Canada states that an Alberta Clipper continues to give snow to Toronto this morning.

Snowfall amounts of 8 to 10 cm have been reported as of 4 am, with an additional 5 cm of snow is expected before the snow tapers off to flurries later this morning.

“Poor winter driving conditions are likely. Untreated roads may become snow covered and slippery,” reads the alert. “A significant impact to the morning commute is expected.”

So get those winter tires on, and drive safe, Toronto.