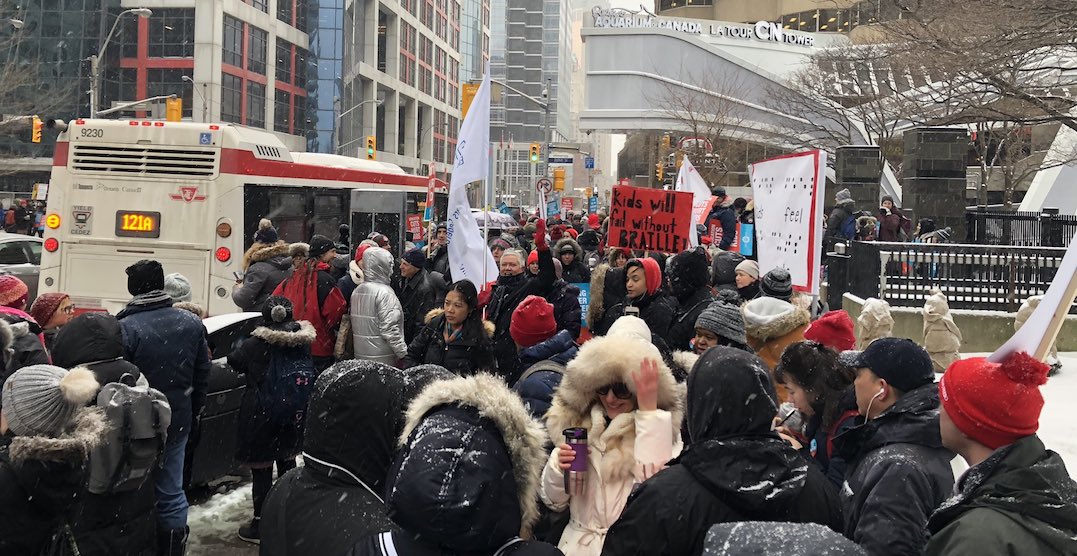 The teacher’s job action continues into its fourth week as the second province-wide strike hits the picket line on Tuesday.

The Elementary Teachers’ Federation of Ontario (ETFO) will use the other four days this week to stage rotating strikes, so each school board can be on the picket line twice this week.

All 83,000 members of the ETFO will participate in the one-day strike.

It’s a collective action because we know, see and feel that #cutshurtkids! #onpoli #ETFOstrike pic.twitter.com/bPybpr9Wya

After the unresolved negotiations between the teacher’s union and the Ontario government last week, ETFO President Sam Hammond said that “ETFO’s 83,000 public elementary school educators will be on the picket lines again next week in the hope that the Ford government and Education Minister Lecce will return to talks prepared to support public education.”

“It is clear that they are not going to accept the government’s deep cuts to public education. The Minister and his team must come to the table with a mandate to reach a deal that benefits students, student learning, and educators,” he said in a release,

Are you a parent concerned about the rotating #ETFOstrike?

Stand with educators and tell the Ford government to stop the cuts to our public education system https://t.co/IwnvmOamUo #onpoli pic.twitter.com/YA9fEi4xt6

Hammond said the government’s stance on special education funding was unsatisfactory. Other areas of contention are classroom size and hiring practices with teacher seniority.

“Our government has put forward reasonable proposals at the negotiating table,” Minister of Education Stephen Lecce said in response to the strikes. “This includes a commitment to maintain full-day kindergarten, and it is deeply disappointing parents are still seeing repeated escalation at the expense of our students to advance higher compensation, including more generous benefit plans.

We firmly believe students should be in class, and we continue to stand ready to negotiate and reach a deal Ontario students deserve.”

Teachers in the French education system are holding a province-wide strike on Thursday, and high school teachers are staging a one-day strike at select boards that same day.

Strikes scheduled for the week: