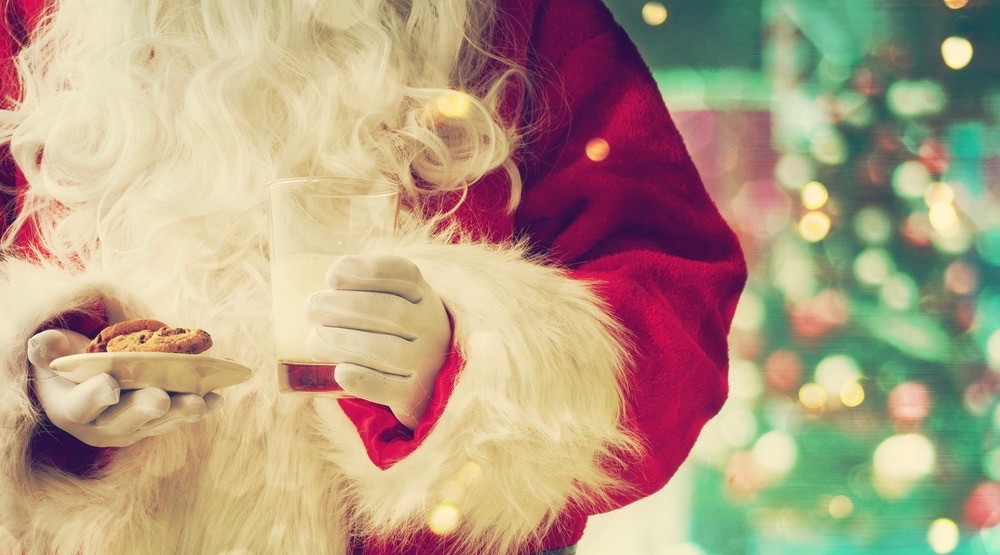 Didn’t get to see Santa in the Santa Claus parade this year?

Don’t worry, there’s still plenty of time to pay the big man in red a visit before December 25.

Here is a roundup of all of the festive events, malls, and parades where you can catch Santa in Toronto over the next few weeks.

Put on your holiday best, and head to Fairview mall and have your picture taken with Santa while he visits form the North Pole.

When: Now until December 24
Where: 1800 Sheppard Ave East

Scarborough Town Centre will be hosting a holiday market, where kids can get their photos taken with Santa and even take a ride on Santa’s virtual reality sleigh ride.

When: Now until December 24
Where: 300 Borough Drive

When: Now until December 22
Where: 55 Mill Street

Although visits with Santa are currently sold out at Sherway Gardens, those shopping for Christmas gifts at the mall should keep their eyes peeled for the big man in red.

When: Now until December 23
Where: 25 The West Mall

Come and see the big man while he visits from the North Pole in an authentic Santa’s Log Cabin. A holiday-themed story will be read and each child will be able to spend time interacting with Santa. Be sure to book ahead so you can avoid the rush. Oh, and make sure to check out the epic tree while you’re there.

When: Now until December 24
Where: Eaton Centre, 220 Yonge St

Santa’s Winter Wonderland at Square One

It’s time to find out if you’ve been naughty or nice this year, as Jolly Old Saint Nicholas will be at Square One to meet the boys and girls of Mississauga. Pay Santa’s Winter Wonderland a visit and get your photo taken with the big man.

When: Now until December 24
Where: Square One, 100 City Centre Drive

Get into the holiday spirit as you get your holiday shopping and pay Santa Claus a visit. The best part of visiting Santa at Yorkdale? Your favourite four-legged pals can also get their photos taken.

When: Now until December 24
Where: Yorkdale Mall, 3401 Dufferin St

Vaughan Mills is partnering with The Hospital for Sick Children (SickKids) again, where 100% of the proceeds generated from Santa Photo Packages purchased at Santa’s Tiny Big Town will be donated to Sick Kids. Pets are invited to get their photos taken too.

Come see Santa while he’s visiting from the North Pole and feeding his reindeer at Bramalea City Centre. Pets are also welcome to join as well.

When: Now until December 24
Where: 25 Peel Centre Drive

For all of the good little boys and girls in Etobicoke, Santa Claus will have his sleigh parked at Cloverdale Mall until Christmas Eve. Create holiday memories this year with a photo featuring your family and Santa.

This holiday season, Erin Mills Town Centre will be hosting story time with Santa, where Jolly old Saint Nick’ will be ready a holiday story. Kids are also invited to bring their Christmas wish lists and share them with Santa.

Put on your most festive attire and head to Hillcrest Mall as Santa will be around until December 26th to take photos. Everyone (pets included) are invited to pay Santa a visit.

For those who want to pay the edgier and trendier Santa a visit, Yorkdale’s Fashion Santa will be back to take photos this holiday season. Yorkdale will be donating $1 to SickKids Foundation for every selfie shared using #FashionSanta2016.

When: Various dates throughout December
Where: Yorkdale Mall, 3401 Dufferin St

If you missed the Santa Claus Parade in November, you can still get into the holiday spirit by watching the 26th annual Lake Shore Santa Claus Parade this December instead. Come watch the floats, sip some hot cocoa, take some festive pics and kids can even give their Christmas lists to Jolly Old Saint Nicholas.

When: Saturday, December 3, 10 am
Where: The parade starts at Dwight Ave and ends at the Castrol Oil parking lot (3620 Lakeshore Blvd. West)

Santa in the Junction

Come out and get ready for the holidays with a day of seasonal shopping and Santa-inspired fun. Get into the Christmas spirit as you visit Santa and his elves at the Junction Train Platform, listen to Mrs. Claus read Christmas stories and check out the live holiday music and workshops that include everything from holiday crafts to furniture demonstrations.

Ho Ho Ho! Santa is coming to the Cambridge Butterfly Conservatory. Kids can have fun decorating cookies and get a chance to meet Santa an Mrs. Claus.

When: December 4, 11 am to 1 pm
Where: Cambridge Butterfly Conservatory, 2500 Kossuth Road

Brunch with Santa at the Royal Botanical Gardens

Join Santa for a delicious buffet brunch at the Royal Botanical Gardens. Once you’ve satisfied your appetite, you can explore the grounds and take in the festive decorations.

When: December 8 to 23
Where: Nathan Phillips Square, 100 Queen St West

This holiday season, join Santa for breakfast under the sea. Ripley’s Aquarium of Canada will be hosting a mouth-watering breakfast with Jolly Old Saint Nicholas. Tickets include: breakfast, complimentary coat check, a family photo with Santa, general admission to the aquarium, and a gift for your child to take home.