Toronto is the leading city in population growth among major US and Canadian cities.

According to the Ryerson University’s Centre for Urban Research and Land Development (CUR), population growth in the City of Toronto during the 12 months ending July 1, 2018 “was stunning.”

The CUR report was issued last week, and states that Toronto’s population grew by 77,435 persons, exceeding the combined gains of the three fastest growing central cities in the United States: Phoenix, San Antonio, and Fort Worth. 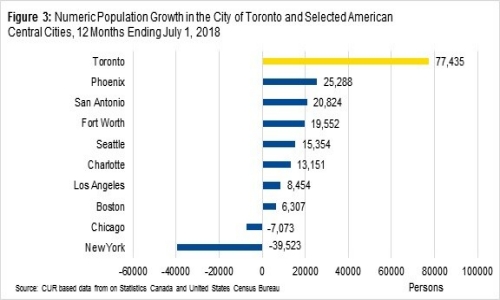 The report also indicated that the estimates showed that population declined in Chicago, New York City, and Los Angeles, both in the metropolitan areas and in the central cities for Chicago and New York City, during the 12 months of that same period.

The fastest growing metropolitan area in the US was Dallas-Fort Worth-Arlington, where the population grew by an estimated 131,767.

The sources of growth for Toronto and Dallas-Fort Worth-Arlington metropolitan areas were different.

For Dallas-Fort Worth-Arlington, births were by far the largest component of growth, followed by net domestic migration and net international migration. 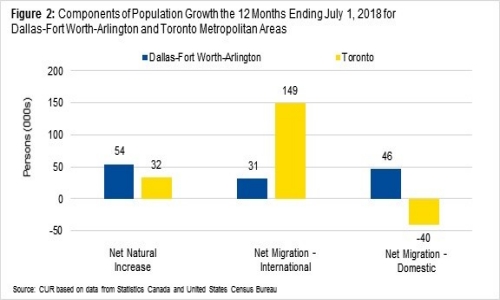 In comparison, Toronto was ahead of Phoenix-Mesa-Scottsdale, which grew by 96,268, and Montreal grew by 66,116. 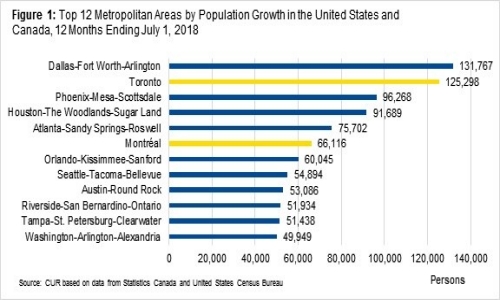