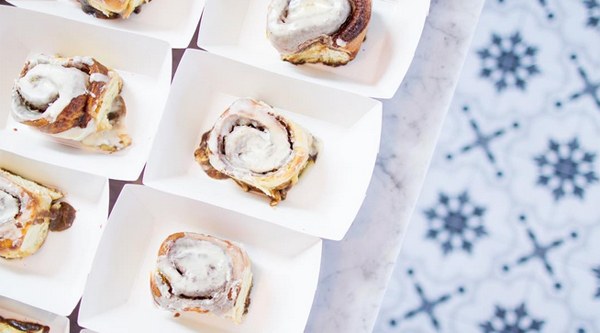 The spirals of light fluffy pastry and sticky, sweet caramelized “goop” have become an ongoing theme in the food writer’s life, popping up on assignments for various publications and even at her family’s brunch table around the holidays.

On the menu, expect to find cinnamon buns sold for $4 a piece or by the half dozen for $20 along with drip coffee from Ezra’s Pound and teas from The Honest Leaf.

The buns have been selling like hot cakes since the store opened yesterday, but if ever there’s  any left-overs look forward to a New Orlean’s-style bread pudding ($10). “It’s actually better than the cinnamons” admits Rosen over the phone, but she doesn’t expect the loaf-style pudding to be available in the first few weeks as she ramps up production to meet the demand.

Come this holiday season, Rosen teases to the potential for egg nog or Hannukah-themed buns too. Occasional specials might make appearances down the line, but those will be available in limited quantities on a first-come-first-served basis.