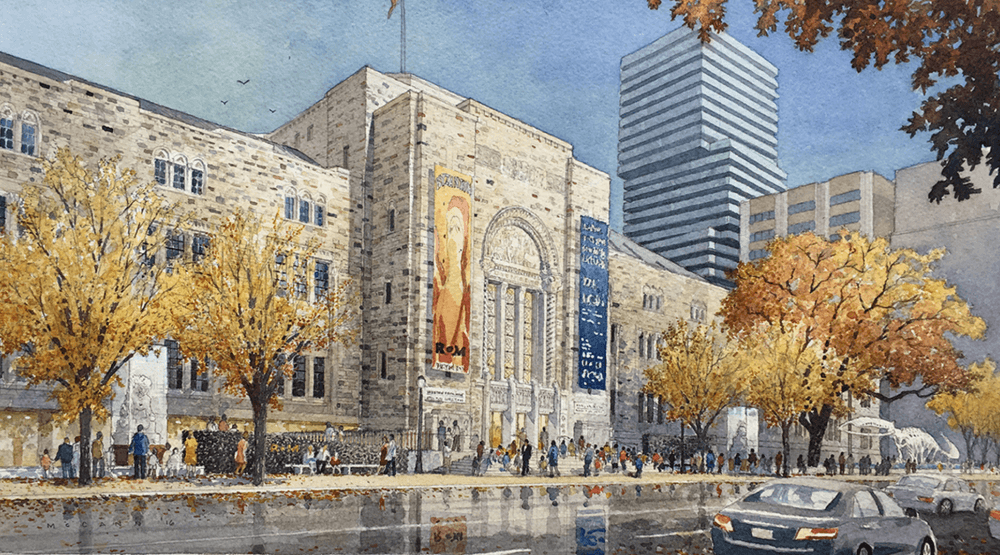 The Royal Ontario Museum (ROM) has announced that it’s reopening the museum doors to Queen’s Park this September.

The revitalization effort will revive the museum’s east-facing façade offering direct access from Museum subway station as well as a convenient second point of entry for visitors.

Made possible by contributions from The W. Garfield Weston Foundation and through a $1.5 million investment by the Government of Ontario, the new entrance will be designed by Toronto architect Siamak Hariri of Hariri Pontarini Architects.

According to a news release,

The reconstruction includes extending, refurbishing and heating the limestone steps to create a welcoming public gathering place that complements the Bloor St. Michael Lee-Chin Crystal Entrance, on the building’s north side. The refurbishments also include new accessibility ramps to provide even greater access for those using wheelchairs or using strollers.

Contemporary glass doors will offer clear views into the Museum’s historic Rotunda and through to the Samuel Hall Currelly Gallery. The Hilary and Galen Weston Wing and The Weston Family Wing will also be illuminated by new architectural lighting at night to enhance the ROM’s historic façade. New landscaping will provide more green space on the grounds facing Queen’s Park and draw visitors to the redesigned entrance.

Refurbishing the Queen’s Park entrance is just one phase of The Welcome Project, an ongoing effort to “enhance the ROM’s presence on the Bloor Street corridor.” The revitalization project encompasses numerous other initiatives including the Helga and Mike Schmidt Performance Terrace, and additional enhancements to the Museum’s public and green spaces. Additional details have yet to be announced.

“I am delighted that our government is investing in the reopening and enhancement of the ROM’s stunning heritage entrance,” said Minister McMahon, Minister of Tourism, Culture and Sport. “As we celebrate Ontario’s 150th anniversary, it is projects like this that help us honour our past, showcase our present and inspire future generations.”