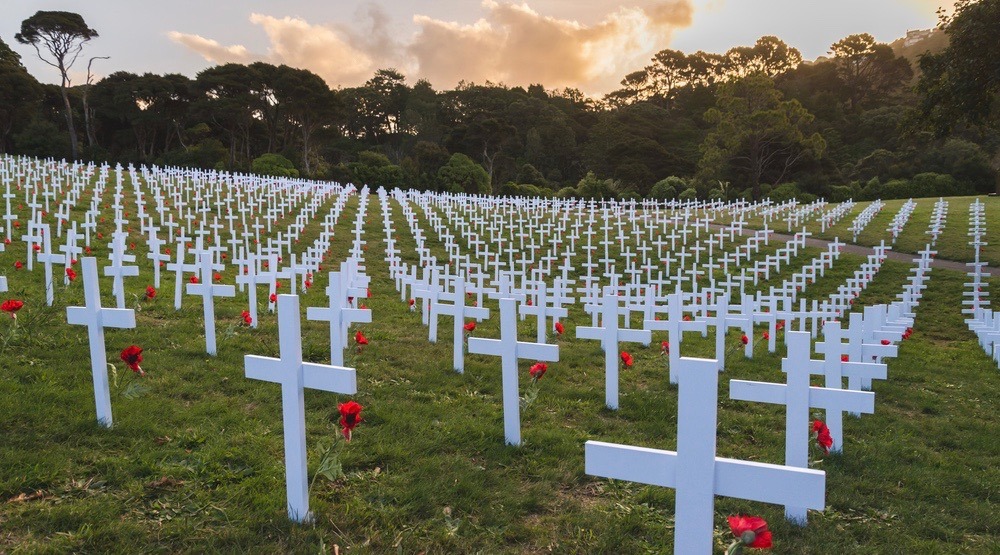 It’s a sacrifice we honour nationwide every 11th day of the 11th month as the clock strikes the 11th hour, a time that marked the formal end of hostilities in 1918. Canada’s commitment to wars since are now part of the commemoration too, of course.

It is the greatest expression of respect during the calendar year, so why isn’t Remembrance Day a statutory holiday in Ontario?

(Quebec, Nova Scotia and Manitoba also don’t recognize it as such).

We honour considerably less significant days with a day off from work here in Ontario. Victoria Day celebrates a monarch who never even visited Canada, Boxing Day literally honours boxes, and Family Day is a weak attempt to convince us winter isn’t all that bad.

Let’s think about what we do on those days, respectively: eat and drink ourselves to oblivion, celebrate capitalism’s grip on Christmas, and probably nothing, because we only remember Family Day is a thing when it’s too late to plan something.

Poppies, a symbol of remembrance.

If Remembrance Day were a paid holiday, most Canadians would treat it as just another recreational escape. Would parents take their children to the cenotaph as teachers do? We wouldn’t dare stop arranging our chia seed pudding on a late, hungover morning to bow for a moment of silence.

Hell, would we even be awake by the time the bagpipes play?

A current private member’s bill drafted by Liberal MP Colin Fraser seeks to make November 11 a legal holiday across the country, an initiative opposed by members of the Royal Canadian Legion.

“November 11 is and should be the most solemn day on our calendar,” writes Canadian veteran J.L. Granatstein in the Legion’s most recent magazine issue. And no place is more likely to get you in the solemn spirit than work or school.

Jokes aside, there’s a compelling argument against making Remembrance Day a holiday.

“If Remembrance Day were to become a statutory holiday, schools might discard even the perfunctory observances many do now,” writes Granatstein, who believes the occasion should be used as an important teaching moment.

“November 11 can never be allowed to become merely another day off work.”

Rob Larman, a director with the War Amps of Canada, shares that opinion. “Our stance is that it should never be a holiday; you take away the uniqueness of being able to educate the younger generation of the horrors of war,” he says.

Remembrance Day is meant to spur respect and gratitude on a national level, which is something a holiday doesn’t achieve. We don’t for a second commemorate the achievements of workers on Labour Day, nor do we express thanks for the season’s harvest on Thanksgiving. They’re merely days off; a chance to go shopping at a more opportune hour.

Life should come to a two-minute standstill at 11am every November 11th – no children laughing in the schoolyard, no sound of keys entering data into a spreadsheet, no high-pitch squeal from the Bambi snapchat filter.

And that act of remembrance is significantly less powerful when the whole day is a standstill.