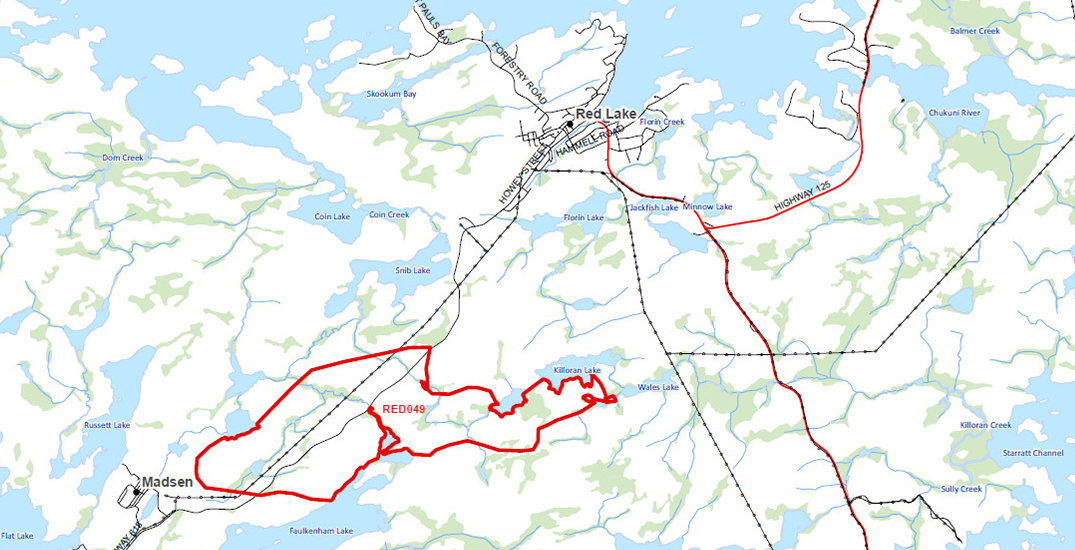 The Municipality of Red Lake has declared an emergency as a result of active wildland fires as they have grown to 676.5 hectares and have begun moving eastward from its origins near Madsen.

The Ontario Municipality has prepared for evacuations and advised all residents depart on August 10. Members of the community who are able to self-evacuate have been told to register at Ear Falls or Dryden Area. Temporary shelter is available at the Dryden Arena Recreation Centre.

@CityofDryden is preparing for the arrival of evacuees from @redlakeontario tonight. Registration is located inside the front doors of Arena 2 on Whyte Avenue.

Winds are expected to change Wednesday, with the possibility of fire spreading to Starratt Olsen, Madsen and those living in the Buffalo area. Heavy smoke is also likely to occur.

Air transportation has been coordinated with Emergency Management Ontario and the Municipal Control Group has continued to work closely with community partners including the Ministry of Natural Resources and Forestry and Ontario Provincial Police.

“It is the safety of our residents that is our first priority,” said Red Lake Mayor Fred Mota.

The Municipality said an Incident Management Team will be in place by midday Wednesday.

“Thunder Bay will do everything we can to support our neighbouring community as they face this dire situation,” said Mayor Bill Mauro.

“I have talked with the Mayor of Red Lake and indicated our willingness to support the Red Lake evacuees. I have also confirmed with our three emergency services that at this time they have the capacity to meet the needs of hosting evacuees.”

Thunder Bay City Manager, Norm Gale said that the city has been in discussions with Medical Officer of Health, Dr. Jane DeMille in relation to the arrival and hosting additional people during the COVID-19 pandemic.

“COVID-19 prevention measures are in place in Thunder Bay and evacuees will abide by the health and safety measures in our community. We have also been informed by Dr. DeMille that at this time there are no active COVID-19 cases in the community of Red Lake,” Gale said.

The Red Lake Margaret Cochenour Memorial Hospital also expressed that there is some concern that residents may be hesitant to evacuate due to the COVID-19 pandemic. They have said that all designated evacuation centres are required to take all necessary precautions.

“You, as an evacuee, can protect yourself by continuing to wear a mask in public areas, practicing diligent hand hygiene, and making efforts to physically distance,” the hospital said.

Pure Gold Mining Inc. has temporarily suspended operations at this time due to the fires but have maintained a security force at their site, while the fire is being contained. All PureGold staff and contractors have been safely accounted for, at this time.

For up-to-date information on current forest fire danger, forest fire activity and fire restrictions in Red Lake and across the province visit the Ministry of Natural Resources and Forestry website or the Municipality of Red Lake’s Facebook page.