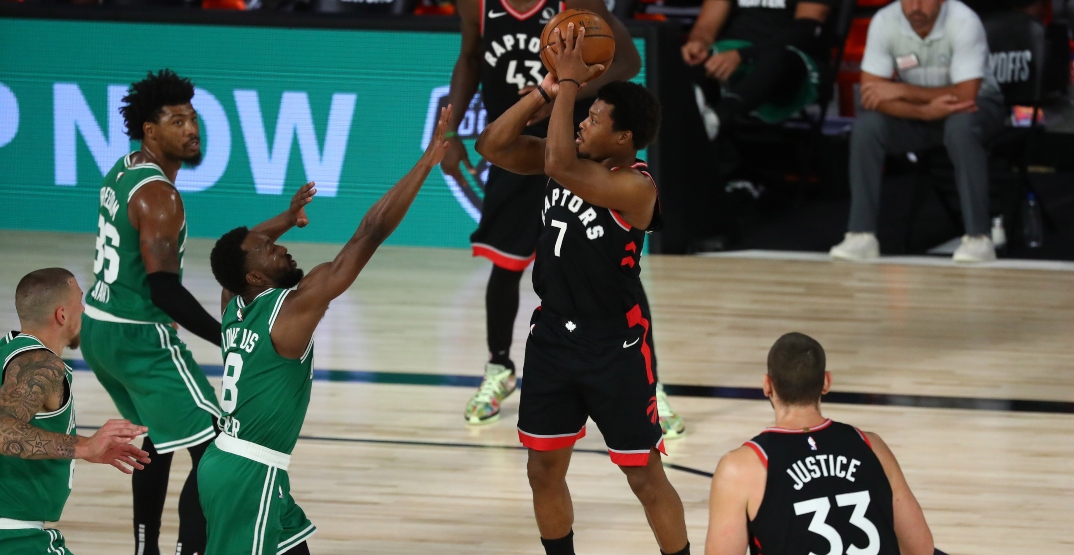 The defending champs aren’t ready to give up their crown just yet.

The Toronto Raptors staved off elimination with a 125–122 double overtime win over the Boston Celtics in Game 6 on Wednesday.

With the Raptors down two and just under a minute to go in double OT, Game 3 hero OG Anunoby hit another clutch three to put the Raptors on top.

The first quarter did not inspire much confidence that the Raptors were going to find a way to keep their season alive.

They were struggling to shoot again, going just 30.4% from the floor and 22.2% from three-point range. They were dominated on the boards, getting out-rebounded 17-12 and giving Boston way too many second and even third-chance opportunities on offence. They were giving the Celtics too many open looks from deep.

Fortunately for the Raptors, the Celtics didn’t shoot very well either, and Toronto was only down 25-21 after the opening frame.

In the second quarter, the Raptors’ offensive struggles were continuing and the Celtics were starting to get some seperation, when Serge Ibaka — who was questionable to play tonight after suffering an ankle injury in Game 5 — got hot from deep, hitting three straight three-point attempts to pull Toronto back within striking distance.

Though they couldn’t have been terribly happy with the way they played, the Raptors were still very much in this game heading into halftime, trailing only 52-48.

In the third quarter, Marc Gasol, who had not hit a three-pointer all series, finally found his stroke from deep.

Then Fred VanVleet started to heat up as well. After getting fouled on a three-point attempt and draining all three free throws, he stepped up and drilled a pair of threes to put the Raptors up for the first time since the first quarter.

The Raptors outscored the Celtics 33-25 in the third quarter to take a 81-77 lead into the fourth.

Early in the fourth, Boston got hot from downtown.

Kyle Lowry had a response for Toronto, though.

Lowry would finish with a game-high 33 points, shooting 12-of-20 from the floor including 6-of-10 from deep.

However, the Raptors were outscored 21-17 in the fourth quarter and didn’t score in the final 4:24 of the frame, sending things to overtime tied up 98-98.

Offence was tough to come by for both teams in overtime as well. Norm Powell missed a buzzer-beater for the win, and the game headed to double overtime tied 106-106.

After Anunoby’s clutch shot, Powell came through with a big steal before finishing off an and-one.

YOU BETTER UNDERSTAND THE GRIND pic.twitter.com/03Qh18wvFJ

It was nail-biter, but the Raptors will indeed see a Game 7.

Recent Game 7 history has been kind to the Raptors. Of course there was their unforgettable victory over the Philadelphia 76ers on Kawhi Leonard’s buzzer-beater in the second round of last year’s playoffs. They also pulled off victories in Game 7 against the Indiana Pacers in the first round of the 2016 playoffs, and against the Miami Heat in the second round. Their last loss in a Game 7 was in their 2014 first-round series against the Brooklyn Nets.

Game 7 of this series will go at 9 pm ET/6 pm PT on Friday, with the winner advancing to face the Heat in the Eastern Conference Final.