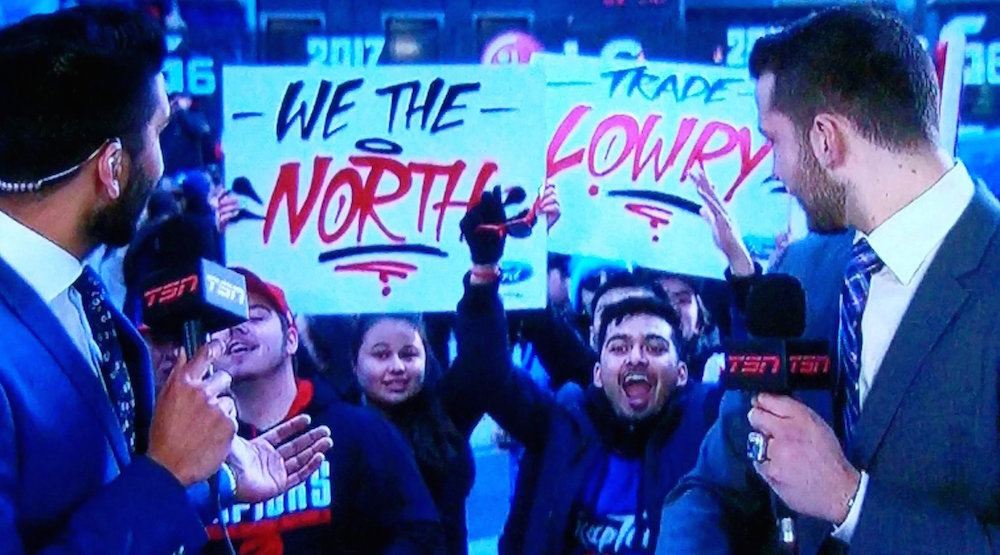 It’s playoff time. Everyone’s on the bandwagon, and the ACC is full and full of energy. So are bars, restaurants, and Jurassic Park for that matter.

That’s what happened on the pre-game broadcast on Tuesday.

Some idiot showed up with a “Trade Lowry” sign that got on TV, as TSN’s Nabil Karim and guest analyst Nik Stauskas of the Philadelphia 76ers looked over their shoulders.

The fan with the sign, whose face is not fully visible in the image above, was piling on Lowry after a disappointing four-point performance in Game 1.

Lowry responded emphatically, dropping 22 points in Game 2, including a clutch jump shot with under 10 seconds left to seal the deal.

Judging by the reaction on social media, “sign guy” did not speak for everyone in Raptors Nation.

Bringing a 'Trade Lowry' sign to Jurassic Park for Round 1, Game 2 is about as pathetic as it gets for an attention-seeking troll

The fan holding a "trade Lowry" sign are the same kind of fans that threw a beer at Hyun Soo Kim. I hate you, and you make us all look bad

Who was the dumbass in Jurassic Park with the Trade Lowry sign? #rtz #WeTheNorth

What's wrong with the fan with the sign saying trade Kyle Lowry?? Someone get him out of Jurassic park! Ban him

To that guy with the "Trade Lowry" sign from earlier … pic.twitter.com/YNNTPyQ6kO

Guy with the trade Lowry sign needs to be fined #RTZ

Where those fake fans with the trade lowry sign at

With the Boston Celtics down 2-0 in their series and the Cleveland Cavaliers looking human, this could be the Raptors’ best shot at a championship. Maybe save the political statement about your All-Star point guard until after the season?