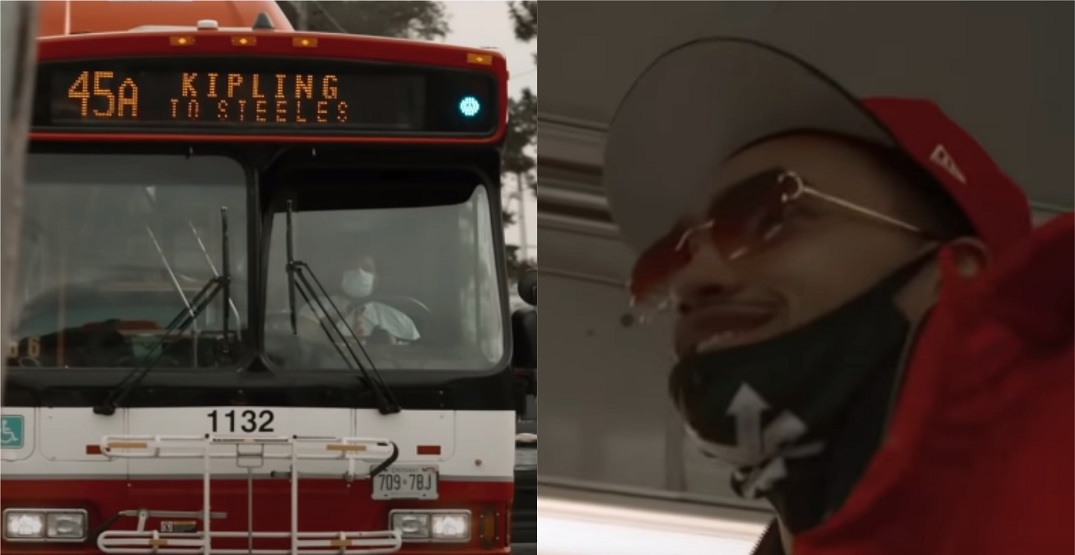 Toronto Raptors rookie Dalano Banton has had his Rexdale roots well-documented ever since he joined the team.

Banton, who gets his jersey number (#45) from the route of the Kipling bus that he used to take, was the first-ever Canadian selected by the Raptors in the NBA draft earlier this year.

Banton, who grew up in the Mount Olive neighbourhood in Rexdale, returned to his old stomping ground in the latest episode of Raptors’ Open Gym series.

Located in the northwest corner of Toronto, Rexdale residents have one of the longest commutes into the city centre. Banton’s typical ride on the #45 bus averaged about 45 minutes, simply to get to Kipling Station, the city’s westernmost subway stop.

And sure enough, Banton found himself on the Kipling bus once again.

“Haven’t been on here in a minute,” Banton said in the video, joking that maybe he’d take it to practice sometime.

It’s been a while since Banton has actually lived in Rexdale full-time, as he went to a pair of prep schools in Massachusetts in high school before playing at both Western Kentucky and Nebraska at the NCAA level.

But it’s clear he has fond memories of where he grew up.

In the video, Banton visits a few childhood basketball courts, including the Albion Boys and Girls Club.

Banton also visited his childhood home, saying that a favourite activity was having sprinting competitions on the complex’s path.

“This is where you found out you could hang,” Banton said. “Only the real can make it through… You guys know me, I play with pace.”

Multiple writers covering the team admitted in the Open Gym episode that they didn’t know much about him when he was drafted. Banton has come off the bench for the Raptors in all 14 games this season. He’s made the most of the 13 minutes he’s averaging a night. At a per-36-minute pace, Banton is averaging 15.1 points, 6.8 rebounds, and 3.8 assists.

Banton also made some time to visit his grandmother, laughing at how often she would rearrange the interior design of her home.

“You can’t come in here and see the same setup twice,” Banton joked.

You can watch the full video below.