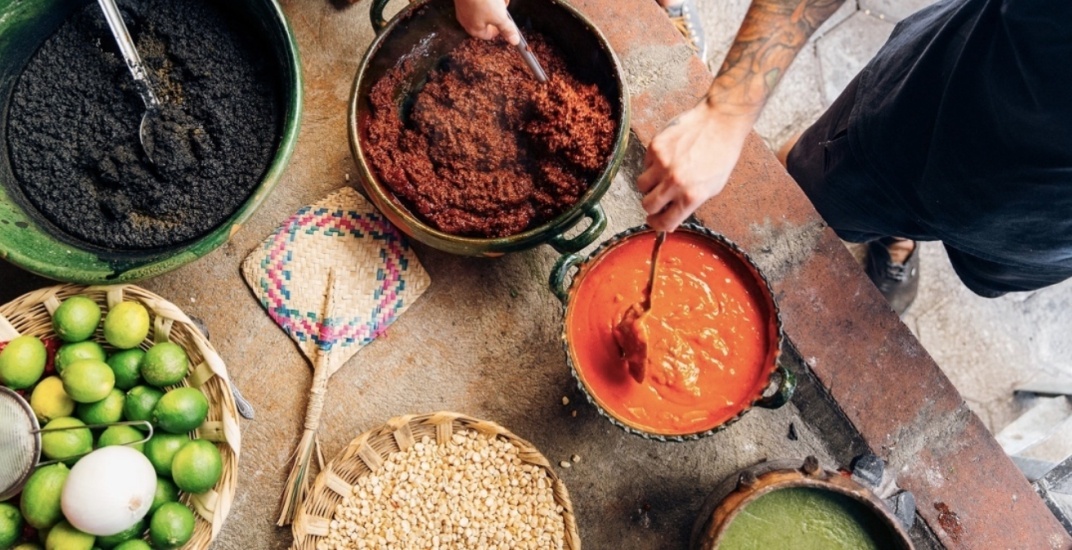 Toronto is getting a new spot for flame-licked Mexican food.

Going in at Bathurst and College (formerly Awtash Cafe) the new restaurant will “celebrate regional Mexican cuisine, inspired by traditional flavours and cooking styles, all cooked over a breathtaking 28 foot-long open fire that runs the span of the space.”

Heading up the kitchen, Chefs Julio Guajardo and Kate Chomyshyn will zero in on regional specialties from Oaxaca, Yucatan, Baja California and beyond will serving up iconic Mexican dishes utilizing traditional techniques and little-known ingredients native to Mexico and imported to Toronto to be paired with local Canadian produce.

This Epazote and Quesillo quesadillas cooked on the comal are an example of how simplicity is best. EPAZOTE (pronounced eh-pah-ZOH-teh)is an aromatic herb commonly used in the cuisines and traditional medicines of central and southern Mexico. Its somewhat pungent flavor profile is described by many as “medicinal” and has notes of oregano, anise, citrus, mint, and even tar or creosote. QUESILLO, also known as Queso Oaxaca, is a semi-soft, white, string-type cheese made from cow’s milk. Belonging to the pasta filata family, similar to a Mozzarella, Oaxaca is a stretched curd cheese, kneaded and sold in long ropes gently wound in balls. Quesillo has savory mellow buttery flavour and is a great melting cheese. The little salty and mild flavour make it is one of the most popular cheeses for preparing quesadillas. #quetzaltoronto #oaxaca #research #comal #woodfire #mexico

In a press release the restaurant is described as “elemental.”

Everything will be cooked over an open flame, roasted in the wood burning oven, grilled, or cooked on the estufa lorena (traditional clay comal and burners). Nixtamal (partially cooked and lime-soaked corn) will be made fresh daily to form the basis for tortillas, tlayuda, tetelas, and other traditional corn-based items, for dishes like the squash tlacoyo: a football-shaped, stuffed masa patty topped with Canadian wild mushrooms.

Grilled and roasted meats, a raw bar, and a bar menu dominated by agave-based cocktails and new world wines will all be on the menu along with a focus on Ontario beers and a “robust selection of mezcals and tequilas.”