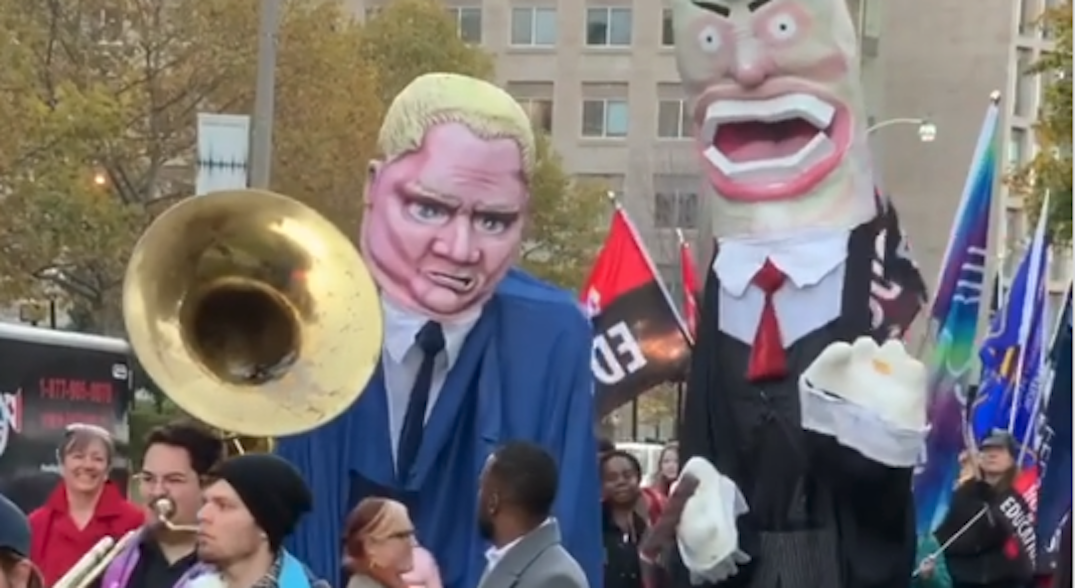 Ontario’s legislature is back in session at Queen’s Park today after a nearly five-month summer break.

The provincial government was initially set to return for the fall session in early September, but instead, the House took a lengthy break rather than sitting during the federal election campaign.

But as MPPs headed back to work on Monday morning, they were greeted bright and early by demonstrators protesting the Ford government’s numerous funding cuts, which includes cuts to public services like health care and education, work laws, equality and justice, environmental programs, and more.

From photos and videos shared on social media, you can see demonstrators from the Ontario Federation of Labour, CUPE, and other groups jeering the provincial government’s cabinet ministers as they arrive at Queen’s Park for the first session back.

Other demonstrators can be seen carrying effigies of Premier Doug Ford, signs, and noisemakers, as speakers blast loud music and a marching band plays.

October 28, MPPs are back at Queen’s Park. The #powerofmany is telling them to end cuts to #publicservices, #education, workers’ #healthandsafety and address the #climatecrisis. It’s time to build an #ontarioforall // https://t.co/NAy2VDCOSL pic.twitter.com/albYt0UIB1

Ontario members: today’s the day for the @OFLabour Day of Action for an #OntarioForAll! If you’re in Toronto, join us at Queen’s Park! If you’re not, check with the OFL or your regional labour council for a protest in your area! #onlab #changetheagenda https://t.co/Gf1Cg9fSdW

As MPP’s return to work at the Ontario Legislature after a nearly 5 month break, they are greeted by demonstrators at Queen’s Park protesting funding cuts. #onpoli pic.twitter.com/cGKJxxq2EV

MPPs returned to the provincial legislature today after a nearly five-month-long recess. During that time the government’s cuts continued to hurt many Ontarians. We are at Queen’s Park to say ONTARIO DESERVES BETTER✊ #onpoli #onted #PowerOfMany @OFLabour pic.twitter.com/AO7Q6jjDrH

To greet Ford’s MPPs returning to the legislature today, ETFO joins the @OFLabour and unions to send a message- we are the #powerofmany and we demand an Ontario for all! #onpoli pic.twitter.com/LFl7luy5wn