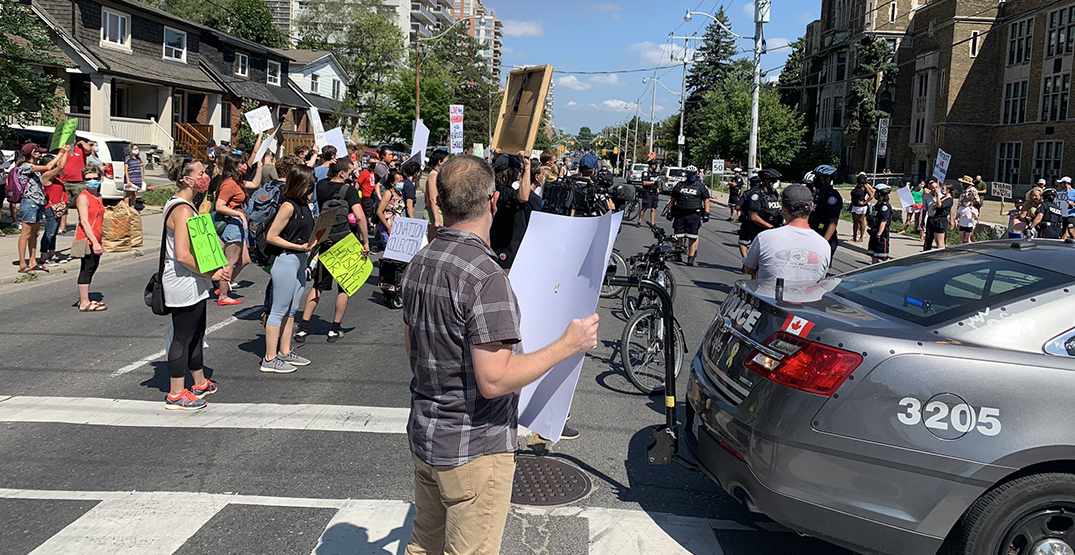 Two protests were held in Toronto’s Midtown on Saturday, as one group wants temporary housing sites for the city’s homeless removed from their neighbourhood, while the other supports the locations.

The city leased the Roehampton Hotel and took possession of two vacant Broadway Avenue apartment buildings to serve as temporary shelter locations in July. According to the city, these facilities are not permanent and only meant as a stopgap during the pandemic.

The opening has led some in the Midtown community to advocate against the shelters and push for the removal of the sites, claiming they have led to them not feeling safe in their communities and an increase in crime.

Flyers allegedly connected to the event containing offensive messages about the homeless were sent to City Councillor Josh Matlow, who shared them on his Twitter account.

Matlow was quick to condemn the language on the image, which includes categorizing the residents of the shelters as “tent people.” Other details included were the time and location of the anti-shelter protest.

Community safety concerns are real and must be (and are being) addressed effectively, immediately & compassionately. But a rally being organized with Giorgio Mammoliti & Sue-Ann Levy, and that calls itself a “crusade”, referring to our city’s homeless as “tent people”, is wrong. pic.twitter.com/TLUGs6zYgB

Counter-protest organizers who support the sites say a pandemic is not the time to be splitting hairs over the location of emergency shelters.

“Many of these members of our community have come from harsh conditions in outdoor encampments, overcrowded shelters (which are now all full, due to COVID-19) or sleeping rough,” the description for the event read. Adding that these conditions are the result of systemic inequities and lack of funding and resources.

“The lack of compassion they are being shown by some is classist, based in stigma and completely unreasonable during a global pandemic.”

In response to both events, the City of Toronto says it has a responsibility to the safety of its neighbourhoods while also treating its homeless with dignity and care.

“The city is working hard to integrate the Roehampton temporary housing program into the community in response to COVID-19. At least 14 residents of 55/65 Broadway Avenue have secured permanent housing,” the city said in a release.

“When the Broadway site is vacated at the end of the month, residents there will relocate to shelters in other neighbourhoods in the city.”

The move to acquire new space was made after more than 30 cases were found within the city’s shelter system in April. Since mid-March, the City of Toronto said it has moved more than 3,500 people through its emergency shelter system to maintain proper physical distancing between beds.

The city also reports that it has made steps to increase the security of the impacted areas, including the installation of 33 security cameras, enhanced 24/7 mobile patrols, and the hiring of four security guards at the Roehampton site

There is also a seven-member Community Safety Team that works between the Roehampton and Broadway Avenue sites picking up hazards, such as needles and monitoring and addressing inappropriate activity, a complaint echoed by some of the shelters’ opponents — and the Parliamentary Secretary to the Minister of Foreign Affairs.

Member of Parliament for Don Valley West Rob Oliphant said residents are unhappy with the way the city acted setting up the shelters.

“The city acted with no consultation, inadequate community security measures, and few resources for those in the shelters,” he wrote on Twitter. “Not good enough.”

Though he cautioned about attending protests — “demonstrations, especially during a pandemic, are not the best way to change public policy” — and pointed out that it’s not a federal issue, he encourages neighbours to get involved, while remaining thoughtful.

Let’s practice good health policy and good social policy. Our community needs to be safe, community voices need to be heard, but let’s do it carefully and thoughtfully. 7/7

Under normal circumstances, Toronto’s shelters usually involve an engagement process that can start six to nine months before a site opens. The pandemic and the resulting state of emergency meant the normal process of “notifying and working with the community before a shelter opens was not possible,” the city said.

More than 30 new temporary shelters have been opened in Toronto since the pandemic began.