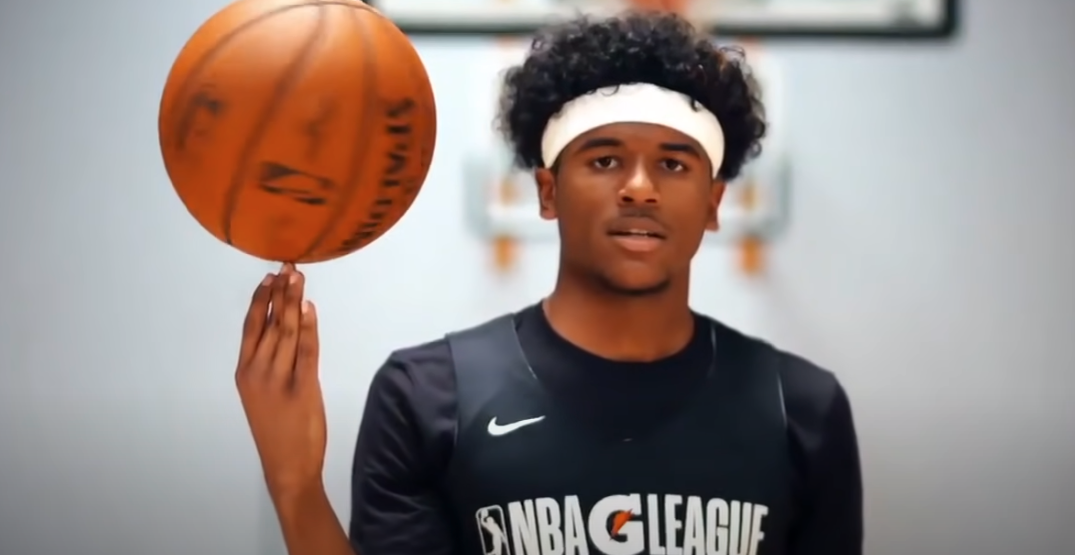 Green, a 6-foot-6 shooting guard, enters the draft from the NBA G League’s Ignite, a team created by the NBA as a developmental program for young players as a college alternative.

The Ignite made headlines when they signed Green as their first-ever player to a $500,000 contract in April 2020, effectively forfeiting his college eligibility.

While on the Ignite, Green averaged a team-leading 17.9 points per game, to go with 4.1 rebounds and 2.8 assists.

In this year’s draft, Green is slated to go anywhere from first to fourth overall, where the Toronto Raptors are selecting.

If you ask those who know him best, Green’s always done it his own way.

Joey Fuca, who coached Green during his high school senior year at Prolific Prep in the 2019-20 season, said he wasn’t surprised to see his star player take the G League route.

“Clearly, this path of the G League is gonna be pretty popular,” Fuca said. “There’s going to be a lot of kids that are starting to do this.”

The step between high school basketball and the pros has always been an awkward one.

Most picks in the top 10 or 15 of the NBA Draft are typically “one-and-dones,” playing a single freshman season in the NCAA before moving on to the pro ranks.

Lamelo Ball, who was this past year’s NBA Rookie of the Year, played professionally with Lithuania’s Prenei and Australia’s Illawarra Hawks after initially committing to UCLA.

Thirty-nine draftees went straight from high school to the NBA from 1995-2005, most notably LeBron James, Kevin Garnett, and Kobe Bryant. But after the NBA mandated players have at least one year between their high school career and being selected in the draft, things have gotten a little… different in the last few years.

Complicating matters are the new name and likeness (NIL) laws put into effect last month, allowing collegiate athletes to be offered up for commercial opportunities for the first time ever, which some think might entice players to stay for a full four years.

In their inaugural year, the Ignite featured draft-eligible players like Green, Jonathan Kuminga (projected to go in the top five), as well as projected second-round picks Daishen Nix and Isaiah Todd. Veterans rounded out the roster, including former Raptors Jarrett Jack and Amir Johnson.

The Ignite’s existence hasn’t completely shifted the draft landscape yet, but it is in the lines of players taking more agency into their own hands in recent years. But the G League, and the Ignite specifically, managed just 15 games due to COVID-19 related stoppages. The season didn’t even begin until February 10. Colleges did have games put off due to the virus, but mostly went ahead with a full season.

But while some see Green as a pioneer or an icon for top prospects, Fuca says Green wasn’t trying to do anything but what was needed for his own career.

“He was just geared to be a pro,” Fuca said. “Every kid’s situation is different. He just wanted to play basketball. He didn’t want to have any breaks. His family thought it was best for him to take that step. It had nothing to do with the colleges [who were offering scholarships]. He just wanted to be different.”

Green played three years at San Joaquin Memorial High School in Fresno, California, before his transfer to Napa, California’s Prolific Prep prior to his senior season.

Green put up averages of 31.5 points, 7.5 rebounds and five assists per game, being named Sports Illustrated All-American player of the year. ESPN ranked him as the #1 recruit in the country.

And while message boards and Instagram pages like to debate a high-profile player like Green moving elsewhere for his senior year, Fuca said it was a natural step for an athlete as talented as him to make.

In their season together, Fuca said he focused on diversifying Green’s two-way skillset in order to be able to compete against higher levels of competition.

“We worked really hard with him kind of taking that next step in terms of being a vocal leader,” Fuca said. “[I told Jalen], the way you were like when you were younger, that ain’t gonna work against the NBA guys. If another team came through with their best player, we wanted Jalen to step up and stop that person.”

The two-hour video, documenting the team’s 31–3 record, has amassed over one million views on YouTube.

“It was an amazing experience to be involved with his senior year,” Fuca said. “It was one of those type of things that doesn’t happen very often. He’s a once-in-a-lifetime player to coach, and he’s worth every penny [to watch.]”

As for how he fits into the NBA, Fuca sees Green becoming one of those guys that wows you night in and night out.

“I think he’s going to be one of the NBA’s premier athletes. His favourite player is Ja Morant,” Fuca said. “[His best comparable] is an explosive player like Ja or Russell Westbrook.”

“Jalen can score in a variety of ways,” Fuca added.

And though the Raptors might be a destination for his former star player, Fuca hasn’t put much stock into mock drafts and how the draft lottery shook out.

“Wherever he goes, I think he’s going to really transform the organization,” Fuca said. “He conducts himself in a manner that is so contagious. People love being around him and will just gravitate towards him.”