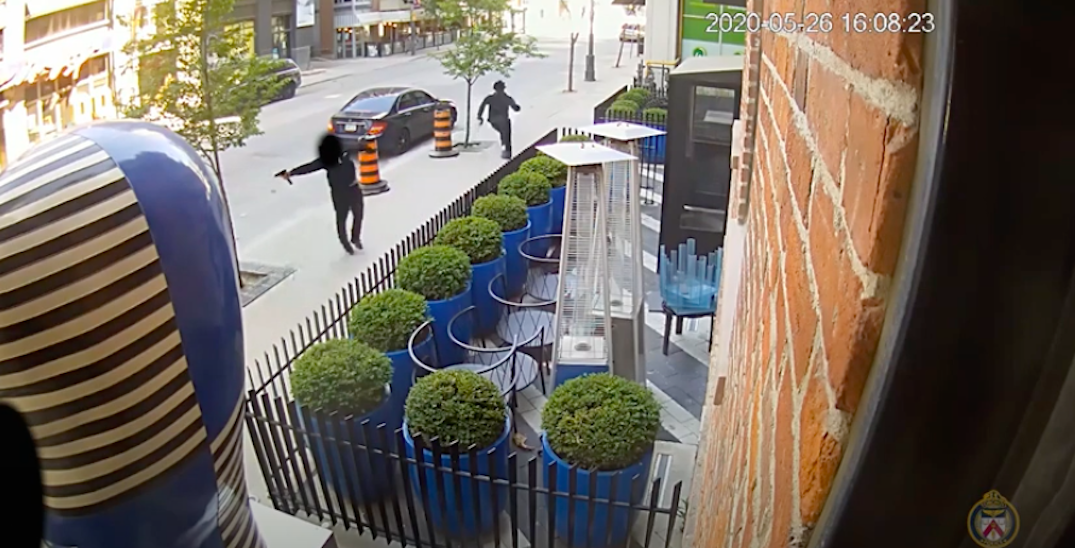 An image of the "active gunfight" on Blue Jays Way. (Toronto Police Service)

Note: The video included in this story may be disturbing to some.

During a news conference at Toronto Police Headquarters, on May 28, security videos and photos were released and police have since identified one of the alleged suspects.

They have established that he is a young person.

According to Toronto Police, on Tuesday, May 26 at 4:08 pm, officers responded to a shooting at 375 King Street West.

It is reported that officers arrived on the scene and located 21-year-old Jenkins, a 15-year-old boy, and a 27-year-old woman suffering from gunshot wounds.

They were all immediately taken to hospital, where the boy and the woman sustained non-life-threatening injuries.

The suspects were seen fleeing the area in a newer model, four-door, blue Volkswagen Tiguan SUV.

On Thursday, police released details on the “active gunfight” that took place on Blue Jays Way.

Police say that Jenkins and his “two associates” crossed the street to go to the west side of Blue Jays Way, when the Tiguan approached.

A lone shooter then emerged from a vehicle and opened fire in what is believed to be a targeted attack.

Jenkins’ two associates returned shots of their own, according to police.

“It was an active gunfight on the sidewalk of Blue Jays Way,” Detective Any Singh said at the time.

One of the associates, the 15-year-old, was struck once by a bullet and then ducked into an alley.

He then reportedly discarded the handgun, which the police have since recovered.

Police say he has been charged with firearm offences and will be appearing in court.

During the gunfight, a six-year-old boy can be seen running narrowly missing a bullet that lands near his feet.

Other bullets can be seen hitting the road close to where his mother is by a car.

“If shot higher, this could have hit the mother standing by the car door,” Singh said.

And, a 27-year-old woman was struck by a stray bullet. She was a “complete bystander,” according to law enforcement.

While she sustained a single gunshot wound, she is expected to make a full recovery.

“A lot of people’s lives could have been put in jeopardy from what transpired,” Singh said.

Anyone with information is asked to contact police at 416-808-7000, Crime Stoppers anonymously at 416-222-TIPS (8477), online at www.222tips.com, online on their Facebook Leave a Tip page, or text TOR and your message to CRIMES (274637). Download the free Crime Stoppers Mobile App on iTunes or Google Play.