Toronto police have made multiple arrests and have laid 278 charges in a massive ongoing investigation into a criminal group that police are calling the “Matrix Bandits,” allegedly responsible for a string of 32 cellphone store robberies across the GTA in the last six months.

The joint investigation, which began in December 2018, is being led by the Toronto Police Department’s hold up unit, but also involves hold up, robbery, and major crime units from police services in York, Peel, Halton, and Toronto.

The robberies have allegedly involved two to three males entering a cell phone store, and controlling employees and customers via weapons, threats, and zip ties. Employees are then told to fill gym bags with cellphones, and the suspects then allegedly flee the scene in stolen cars.

Police say that the robberies have escalated over time, expanding the area in which they occur and suspects allegedly use varying methods and clothing. Police also say that new members of the criminal group have been recruited via social media.

So far, police have arrested 22 males since January, 11 of whom have been underage suspects — boys ranging from 15-17 years old and men as old as 25 — and some of whom had no previous connection with police. Among others, their charges include robbery, assault with a weapon, possession of stolen property, disguise with intent, theft of a vehicle, and dangerous operation of a vehicle.

Along with the arrests, police say that they have executed 13 search warrants, and have laid charges in relation to 23 out of the 32 stores robbed, not to mention two carjackings, a street robbery, and seven vehicle thefts in Toronto, York, Barrie, and Halton.

The other nine of the cellphone store robberies in the GTA remain unsolved, and as part of the ongoing investigation, police have released security camera footage of one of these robberies.

The robbery occurred on February 11, 2019, and had two males allegedly enter a cellphone store in the Lawrence Avenue West and Allen Road area. Police say the males assaulted the store employee and an 83-year-old customer with a baton, before fleeing the area with numerous phones.

Police have also released photos of two males wanted for the robbery: 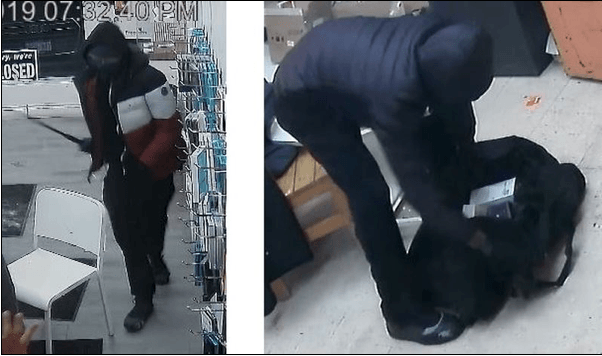