This week, an Amber Alert was set off in Ontario for an alleged child abduction in Markham.

While the child was located safe this time, a similar alert in February did not have a similar result.

An Amber Alert was issued on February 14 in search of 11-year-old Riya Rajkumar.

At approximately 12:30 am, Peel Police confirmed that Riya had been found dead in a residence in Brampton. Her 41-year-old father, Roopesh Rajkumar, who had abducted her was arrested.

Police say Rajkumar was located following a call because of the Alert.

Our communications bureau is receiving numerous calls to 9-1-1, complaining about the late hour of the Amber Alert. As a direct result of someone receiving the alert, we were able to locate the suspect & his vehicle. The system works. Thank you to all those that called with tips.

The Amber Alert program is a partnership between law enforcement agencies and media broadcasters to send out emergency alerts to the public when a child has been abducted and it is believed that the child’s life is in imminent danger. It’s designed “to quickly alert the public” of the situation.

But while police were able to locate Rajkumar, they also said that many called 911 to complain about the alert.

In fact, someone felt the need to call 911 — not once, but twice — to express their anger about being woken up by the alert.

And a report released by the Peel Regional Police Board shows that 89 calls (43% of calls that day after the alert) were deemed a misuse of the 911 system.

The report, titled ‘Misuse of the 9-1-1 system’, also released some of the comments made by callers to police that day.

“We are trying to watch the Leaf game,” said one caller.

“You have an Amber Alert that I can’t get off my TV,” said another. 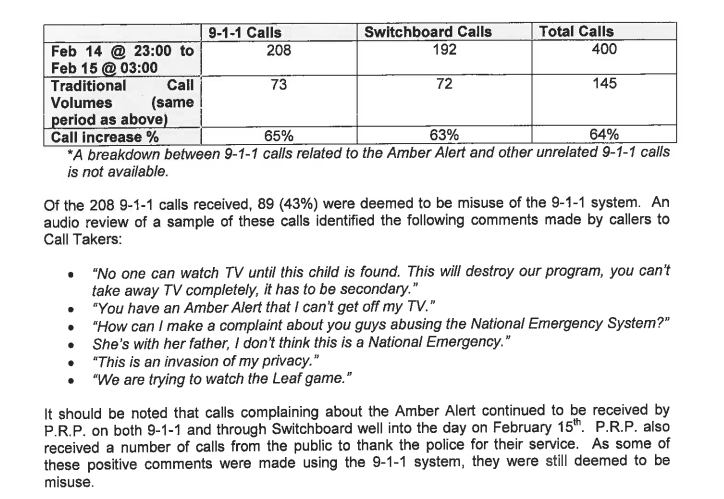 Peel Police say that they continue to work to increase public awareness on the appropriate use of 911 services. They are also doing preliminary research in relation to the development of a non-emergency three-digit number to “facilitate immediate non-emergency calls.”

“The misuse of the 911 system poses a risk to public safety as these calls can potentially delay legitimate 911 calls from being answered,” reads the report.